This article is about the writer Joseph Conrad. For the museum ship, see Joseph Conrad (ship) ; for other people see Josef Konrad . 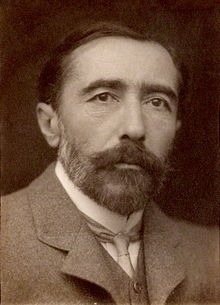 Joseph Conrad in a photograph by George Charles Beresford in 1904

Although Conrad did not speak English until his twenties, he is considered one of the most important writers of the 19th century who wrote their work in English . Conrad's experiences with the British colonial empire, his activities in the French and British merchant navy and the memory of his Polish homeland had an impact on his work. Conrad's work is added to the modern and partly to the realism of the 19th century.

Joseph Conrad was born to Polish parents, both of whom came from aristocratic families and belonged to the Nałęcz coat of arms community, in Berdyczów in the Kiev governorate (now Ukraine ), which was Polish until 1793 and came under Russian rule after the second partition of Poland . Conrad's father, Apollo Korzeniowski , was a writer and Polish patriot who translated William Shakespeare and Victor Hugo into Polish . He encouraged his son to read Polish and French literature . Because of his commitment to regaining Polish independence, his father was arrested in 1861, initially imprisoned in the Xth Pavilion of the Warsaw Citadel, and nine months later exiled to Vologda in northern Russia , where his wife Ewelina (née Bobrowska) and his son accompanied him. Conrad's mother died there in 1865. After his release from exile, his father went to the Polish-speaking part of Austria and lived for a short time in Krakow , where Conrad attended high school, and died there in 1869.

His uncle Tadeusz Bobrowski received custody of the then eleven-year-old child. In 1874 he allowed the sixteen-year-old boy to go to Marseille in France to become a seaman. Conrad first set foot on British soil in 1878.

In 1886, at the age of 30, he received British citizenship. In 1888 he became captain of the Otago ; it should be his only position as captain. His experiences at sea, especially in the Congo and on the Malay Islands , form the background of his work.

He began his career as a writer around 1890. As the captain of a river steamer on the Stanley Falls in the Congo , he had developed a severe fever and had to be brought ashore in a canoe. The canoe capsized, but Conrad was rescued. At that time he had the opening chapters of his first novel with him. The fever never left him, a last attempt in 1893 to recover at sea failed.

Conrad wrote in English, which he had only begun to learn when he was 21. In 1895 he published his first novel Almayer's Folly , published in German as Almayers Wahn . For a long time he was dependent on patrons. It was not until 1914 that he had his literary breakthrough with the game of chance . His novels and short stories are among the most important works of English literature of the late 19th and early 20th centuries. 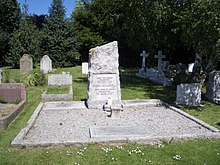 From 1919 on Conrad lived with his family in the 'Oswalds house' in Bishopsbourne / Kent, which he owned . There he died of heart failure on August 3, 1924. He is buried with his wife Jessie in Canterbury Cemetery. On his tombstone are the lines by Edmund Spenser , which precede Conrad's penultimate novel The Buccaneer as the motto: "Sleep after toyle, port after stormie seas, Ease after warre, death after life, does greatly please."

Most of Conrad's manuscripts , including those of Lord Jim , Nostromo, and The Secret Agent , are in the Rosenbach Museum in Philadelphia .

In its 1951 published political theory major work The Origins of totalitarism (dt 1955. The Origins of Totalitarianism ) leads Hannah Arendt Joseph Conrad as part of its reflection on the origins of racism as one of several key witnesses and dealing with this perspective in depth with his Plant.

Arendt assumes that the racial ideology of the 20th century only emerged as a result of the European expansion policy in the age of imperialism . The starting point of their analysis is the Boer race concept , which arose as a reaction to the encounter with what they saw as "ghostly beings" of Africans, "who seemed to be neither humans nor animals" and "without any tangible civilizational or political reality [, ] populated and overpopulated the black continent. ”The Boers, however, did not want to belong to the same species of living beings as these in their eyes terrifying natives. Arendt interprets the terrible massacres that the racial madness caused (the extermination of the Hottentot tribes , the murder of Carl Peters , the monstrous decimation of the Congo population by the Belgian king) as a consequence of this defense. The insanity and dire consequences of racism far exceeded the horror from which it arose, but it is only understandable for this reason. The experience that preceded this cruel practice of overseas racism can be inferred from Conrad's texts:

"[W] if one should understand the horror out of which it arose, then one should not get information from the scholars of ethnology, since they had to be free from the horror in order to be able to begin research at all. nor with the racial fanatics who pretend to be above horror, nor finally with those who, in their justified fight against racial ideas of all kinds, have the understandable tendency to deny them any real basis of experience at all. Joseph Conrad's story "The Heart of Darkness" is in any case more suitable to illuminate this background of experience than the relevant historical, political or ethnological literature. "

In Arendt's analysis of early capitalism in South Africa , which was carried by lawless adventurers and adventurers without ideals who embodied the scraps of European society, she again mentions Conrad as an informant. He has aptly described this kind of repulsive individuals in the figure of Mr. Kurtz : "through and through empty and hollow, reckless and soft, cruel and cowardly, full of greed, but without any boldness." Arendt assumes that Carl Peters Conrad as Model for Mr. Kurtz served (p. 413 f.). Arendt also refers to other characters from Conrad, such as Mr Jones from his novel Sieg : outwardly gentlemen of good society, inwardly vicious villains who met in the lawless jungle and got along brilliantly there. Arendt depicts the “natives” based on Conrad as inscrutable schemes that reminded the European racists of inmates of a madhouse. Killing them was like not murdering a person; on the other hand, they were reminiscent of prehistoric people who in principle seemed to have the same nature as the “ruling race” (p. 415 f.).

Maya Jasanoff and Adam Hochschild consider Joseph Conrad to be an exceptional phenomenon in literature before 1914. On the one hand, he worked at a time when many important authors only dealt with one region (e.g. Thomas Hardy with Wessex , James Joyce with Dublin or Marcel Proust with Paris ), the brutal imperialism of the European powers and its devastating global consequences. While authors such as John Buchan and Rudyard Kipling glorified imperialism, it was not until the 1930s that literary works with a perspective critical of globalization emerged, such as Burmese Days (1934) by George Orwell : Conrad lived in a far wider world than even the greatest of his contemporaries. (Hochschild) On his travels, Conrad noticed the lives of many foreign workers in precarious conditions; He himself witnessed the process of the displacement of sailing ships by steamships and the subsequent unemployment among seafarers, experienced the greed of the rich as well as wage depressions, nationalism, anarchism, rebellion and terrorism in Russia, England and elsewhere. Most notably, he witnessed many degrading forms of slave labor.

The Nigerian writer Chinua Achebe , however, described Conrad as a "bloody racist" ( bloody racist ) and accused him that he had tried in the literary way to free the conscience of Europe from the historic burden of atrocities against Africans. Conrad's sociopathic worldview is rooted in imperialism and his poetry is an attempt to invent justifications for Europe to mercilessly rob and plunder the continent.

Conrad was frequently received in the literary and cultural studies discourses of postmodernism and postcolonialism . Werner Herzog's adventure film Aguirre, the Wrath of God , Francis Ford Coppola's war drama Apocalypse Now and, most recently, several computer games ( Far Cry 2 , Red Dead Redemption in the level And The Truth Will Set You Free , and Spec Ops: The Line ) cite more or less broad outlines of the plot, motifs or characters from the novel Heart of Darkness .

Joseph Conrad himself also appears on various occasions as a literary figure. For example, WG Sebald describes in detail his youth in The Rings of Saturn . Mention can also be found in The Dream of the Celt by Mario Vargas Llosa and Love in the Times of Cholera by Gabriel García Márquez . The character of Colonel John Konrad in the computer game Spec Ops: The Line pays homage to him . 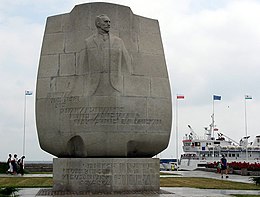 German Almayers Wahn , translated by Elsie McCalman, S. Fischer, Berlin 1935. Many other editions. From 1966 translation Günther Dahnehl Aufbau Verlag. From 1972 at Fischer Verlag until 1993.
New translation and with a comment by Klaus Hoffer as Almayer's castle in the air. The story of an eastern stream. Novel. Haffmans Verlag, Zurich 1992, ISBN 3-251-20126-3 . Paperback published by Piper Verlag until 2017.

Karain: A memory
The Idiots
An Outpost of Progress . An outpost of progress
The Return , dt. The return
The lagoon

Gaspar Ruiz ;
The Informer
The Brute
An anarchist
The Duel
Il Conde