This article is about the film actor James Mason. For other individuals, see James Mason (disambiguation) .

James Mason studied architecture in Cambridge . After graduating in 1931, he first went to the stage and from 1935 also worked in film. For many years he was mainly seen in quota quickies , cheaply made films financed by public film funding . With The Man in Gray , he became the box-office best male cinema star in Great Britain from 1943 . In this film he played an obscure nobleman in Queen Victoria's time . He sadistically exploits his sexually obedient protagonist, played by Margaret Lockwood , plunging her into moral abysses and in the end whipping her to death with a riding crop. The other heroine, played by Phyllis Calvert , is also brutally tortured.

The overwhelming success of the film established the new genre of Gainsborough Gothic . In these costume films , which were mainly produced by the film studio Gainsborough Pictures , the heroine was mostly unwittingly the bearer of a secret and was subjected to great agony in the course of the plot by a depraved nobleman - mostly played by James Mason. It was only shortly before the end that a youthful hero, usually Stewart Granger , rescued her from her fate. Another variation showed the heroine in the double role of a good and an abysmally evil twin sister.

Through films like Fanny in Gaslicht from 1944 on the side of Phyllis Calvert and The Last Veil , in which Ann Todd wants to become a celebrated pianist, Mason established himself through roles as a mysterious man who was both dangerous and attractive to women. The success of Outcast paved Mason's path to Hollywood in 1947 through a contract with Walter Wanger .

Mason was also to star in the film adaptation of Honoré de Balzac's novel The Duchess of Langeais , with which Greta Garbo should make her comeback on the big screen. However, the project failed due to funding, and there are only a few test shots of Greta Garbo and still photos of Mason in his film costumes. 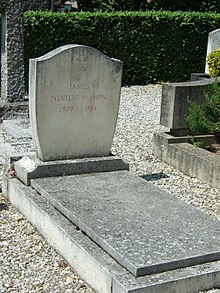 Mason had great success in 1951 in Pandora and the Flying Dutchman , which is now a cult film, and in the same year as Field Marshal Erwin Rommel in Rommel, the desert fox of 1951, a role which he embodied again in 1953 in The Desert Rats . He played other well-known leading roles in the Jules Verne films 20,000 Leagues Under the Sea as Captain Nemo and as Professor Oliver Lindenbrook in Journey to the Center of the Earth from 1959. Otherwise, after 1950, he was mainly seen in supporting roles, so alongside Stewart Granger and Deborah Kerr in In the Shadow of the Crown from 1952 and 1959 in Alfred Hitchcock's The Invisible Third as antagonists of Cary Grant .

Other works included A New Star in the Sky alongside Judy Garland in 1954 , for which Mason received an Oscar nomination for Best Actor , and Stanley Kubrick's Lolita , the 1962 film adaptation of Vladimir Nabokov 's novel of the same name , in which he played Humbert Humbert was seen. In 1966 he impersonated Lynn Redgrave 's paternal friend in Georgy Girl .

In 1981 Mason was one of the star cast of the Agatha Christie film The Evil Under the Sun with Peter Ustinov as Hercule Poirot . In the same year his autobiography Before I Forget was published . In America, however, Mason never achieved as much success as in England.

James Mason died of a heart attack on July 27, 1984 in Lausanne . Due to an inheritance dispute, however, his urn could only be buried sixteen years later; the grave is in the Corsier-sur-Vevey cemetery . The film The Last Hunt and the television production Dr. Fischer from Geneva based on the novel of the same name by Graham Greene , in which he was still involved before his death, were published posthumously in 1985 .

James Mason has been awarded a star on the Hollywood Walk of Fame (location: 6841 Hollywood Boulevard) for his television career .