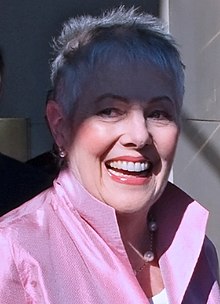 Lynn Rachel Redgrave OBE (born March 8, 1943 in London , England - † May 2, 2010 in Kent , Connecticut ) was a British - American actress . In addition to a five-decade long stage career, which includes appearances in comedies as well as dramas, she appeared in over 90 film and television roles. She was nominated for an Oscar for the feature films Georgy Girl (1966) and Gods and Monsters (1998) . As a member of a well-known family of actors, she processed her own biographical facts as well as those of family members into several successful stage plays in her later years.

Lynn Redgrave came from the Redgrave actor dynasty. She was the youngest daughter of the actors Michael Redgrave (1908–1985) and Rachel Kempson (1910–2003). Her older siblings were the politically active actors Vanessa Redgrave (* 1937) and Corin Redgrave (1939-2010). She was the aunt of Natasha Richardson , Joely Richardson and Jemma Redgrave . For a long time she felt inadequate towards her siblings. "Vanessa was the one who was expected to be the great actress," Redgrave said in a 1999 interview. "It was always 'Corin is the brain, Vanessa is the shining star, oh, and then there's Lynn'." These doubts were favored by her father, who could never make friends with his daughter's acting ambitions ( “That strange, shy pudding from a child” ). Likewise, she was less politically active than her two siblings.

She spent her childhood with educators. She rarely saw her parents and described herself as a sickly and withdrawn child. “I really didn't know him. I lived in his house. I was in awe of him and I worshiped him and I hated him and I loved him all in one go, " said Redgrave of her father. Like her sister Vanessa before her, she attended Queen's Gate School in Kensington . In her youth she was enthusiastic about equestrian sports, but soon realized that a successful sporting career would be closed to her. After toying with the profession of cook, Redgrave decided to pursue an acting career at the age of 15.

After attending the Central School of Speech and Drama , she made her debut at the Royal Court Theater in 1962 in a production of A Midsummer Night's Dream by her brother-in-law, Tony Richardson . She became one of the twelve contract actors at Laurence Olivier's renowned National Theater , was entrusted with supporting roles in plays by Shakespeare and Bertolt Brecht and showed a talent for light comedy. On Broadway in New York , she played her first role in Peter Shaffer's comedy Black Comedy (1967) and one of her favorite roles was Billie Dawn in the London revival of Born Yesterday (1973).

In 1976 Redgrave was nominated for a Tony Award for her part as Vivie Warren in George Bernard Shaw's wife Warren's profession . For the self-written one-person play Shakespeare for My Father (1993-1994), which was inspired by her relationship with her father, and for the revival The Constant Wife (2005) Redgrave received two other nominations for the most important US theater award . She saw her debut as a playwright as a kind of self-therapy. In 1990 she appeared in Robert Sturua's London production of Anton Chekhov's Three Sisters as Mascha alongside her sister Vanessa (Olga) and her niece Jemma (Irina). At the same time, Vanessa Redgrave condemned the US intervention in the Second Gulf War , whereupon Lynn Redgrave publicly opposed her sister's opinion. The two would not reconcile until years later. With the play The Mandrake Root , she dedicated herself to her mother in 2001. In 2003, Redgrave won an American Drama Desk Award for her appearance as Miss Fozzard in Alan Bennett's Talking Heads Monologue .

Work in film and television

In her film career, Redgrave has played roles in over 90 film and television productions, both in comedies and dramas. Her film debut was in 1963 with a small part as a barmaid in Tony Richardson's Oscar winner Tom Jones - between bed and gallows beside George Devine , Susannah York and David Warner , which it recommended for Laurence Olivier's National Theater. After British critics became aware of Redgrave through the drama The First Night (1964), the international breakthrough followed with her third film Georgy Girl (1966), which is set in London during the swinging sixties . The title role of the likable but unattractive Georgy, who vacillates between a married bon vivant (played by James Mason ) and her young boyfriend ( Alan Bates ), earned her a Golden Globe Award . At the 1967 Academy Awards , she competed with her sister for the Best Actress Award , but lost out to Elizabeth Taylor (for Who's Afraid of Virginia Woolf? ).

Through Georgy Girl , Redgrave was for a long time subscribed to the part of the "happy girl with the broken heart" , but could not build on the surprise success of the film. In 2003 she described her early breakthrough as a film actress as a "double-edged sword" . “You end up paying a price for it [...] You're too young to have judgment to decide what to do with your career, so other people start telling you what you should do and you think that they know better, ” said Redgrave. With Woody Allen's satire Everything you always wanted to know about sex, but never dared to ask , the British actress made her debut in US cinema in 1972. After moving to the United States, she became an excellent comedy actress with an intrepid, cheeky sense of humor.

She gained fame in the United States through various roles in television series. The lead role of an administrative clerk in the US hospital series House Calls (1979-1981), an offshoot of the cinema production of the same name (1978, German title: Hausbesuche ) with Glenda Jackson , brought Redgrave an Emmy nomination for best comedy actress. In Teachers Only (1982-1983) she was an English teacher at a high school in Los Angeles . She also appeared as a guest in various talk and game shows. In 1991 she starred in a television adaptation of What Really Happened To Baby Jane? the title role, in which her sister Vanessa played the part of Blanche.

After years of abstinence from the cinema, Redgrave drew attention again in the early 1990s with character roles. In 1996 she played the wife of pianist David Helfgott ( Geoffrey Rush ) in the Oscar-winning artist biography Shine - Der Weg ins Licht . In 1998, she won another Golden Globe and received her second Oscar nomination for the role of the loyal Hungarian housekeeper to horror film director James Whale ( Ian McKellen ) in Gods and Monsters . In 2002 she starred in David Cronenberg's award-winning mystery drama Spider . In 2005 she starred alongside Natasha Richardson and Vanessa Redgrave in James Ivory's historical drama The White Countess . She had her last cinema appearance as a drunk in the US comedy Shopaholic - Die Schnäppchenjägerin (2009). In the same year, Redgrave made her final guest roles on the television series Criminal Intent and Everything Betty! .

Lynn Redgrave lived in the United States for several decades from 1974 and received American citizenship in 1998. She was married to former child actor John Clark from 1967 to 2000, who became her manager. The marriage resulted in a son and two daughters. A $ 10 million lawsuit filed in 1981 against the alleged ban on breastfeeding her daughter on the set of the US television series House Calls (1979-1981) cost her the role and led to years of legal battle.

The lost lawsuit brought her to the brink of financial ruin and, according to her own statements, had a negative effect on her career. "It wasn't exactly that I was blacklisted, but Hollywood is the smallest city in the world and Universal is the most powerful studio in the world and it was just a lot more comfortable not to get involved," Redgrave said in 1994 .

Her relationship with Clark broke up after his previous affair with Redgrave's future daughter-in-law, who was an alleged grandson, came to light in 1998. From 1983 to 1991 Redgrave promoted Weight Watchers and in 1991 presented her autobiography This is Living , in which she dealt with her bulimia disease, among other things . In 2001 she was named Officer of the Order of the British Empire (OBE) for her services as an actress .

In 2010, Lynn Redgrave died at her home in Kent , Connecticut, aged 67 . Her death was preceded by years of breast cancer , about which she and her daughter Annabel Clark published the book Journal: A Mother and Daughter's Recovery from Breast Cancer (2004). The diagnosis helped her reconcile with her sister Vanessa, whose radical political views had split for years. She also came to terms with her illness in her award-winning one-woman show Nightingale (2006), which she was also inspired to write by the life of her grandmother Beatrice Kempson and the end of her 32-year marriage to Clark. Her last theater work was the self-written play Rachel and Juliet (2009/2010), which was about her mother's fascination with William Shakespeare's Julia .

Plays (as a writer)