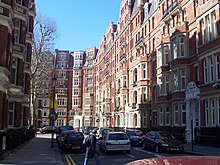 Kensington is a district in west London that belongs to the borough of Kensington and Chelsea . Located directly on the western edge of Hyde Park , the district, with its predominantly Victorian development, offers the neat image of an aristocratic, “royal” district. There are also some down-to-earth cafes, pubs and bars to be found (especially on Kensington Church Street).

The district is famous for the direct vicinity of Kensington Palace and for the very high real estate prices of some prominent luxury properties on the edge of Kensington Gardens and Hyde Park as well as Albertopolis , a museum district in which the Royal Albert Hall is also located.

In the west of Kensington there are some social buildings in the vicinity of the multi-lane main thoroughfare Westway , including the Grenfell Tower, which became famous due to a fire in June 2017 .

Kensington is the UK constituency with the highest median income and consistently voted Conservative Party through 2017 . In one of the closest election results in the 2017 British general election, the Labor Party candidate was elected by 35 votes .

Born and died in Kensington: