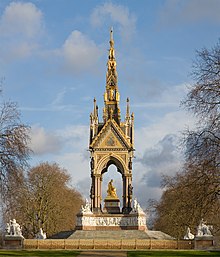 Kensington Gardens is one of the royal parks in London and directly borders Hyde Park . The largest part is in the City of Westminster , a small part to the west in the borough of Kensington and Chelsea . The area is 1.1 km².

Kensington Gardens are mistakenly believed to be part of Hyde Park, but West Carriage Drive separates the two parks. Together with Hyde Park, Green Park and St. James's Park , Kensington Gardens form a four-kilometer-long green strip between the districts of Westminster and Notting Hill , only interrupted by a few streets .

In 1689 King William III bought. the area to recover from his asthma suffering. He hired Christopher Wren to build Kensington Palace . The Albert Memorial has stood on the southern edge of the park since 1872 in memory of Prince Albert of Saxe-Coburg and Gotha .

The Serpentine Gallery , which specializes in modern art, is housed in a pavilion built in 1934 . Works by Man Ray , Henry Moore , Andy Warhol , Bridget Riley and Damien Hirst were exhibited here. Another attraction is a Peter Pan statue and the elf oak . Since 2013 , the Serpentine Sackler Gallery has been located in a new building designed by the architects Zaha Hadid . The building is in close proximity to The Magazine , a gunpowder magazine from 1805.