The title of this article is ambiguous. Further meanings are listed under Hyde Park (disambiguation) . 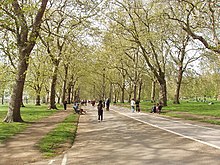 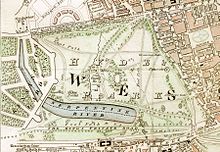 The Hyde Park [ ˌhaɪdpɑːk ] is a public park in the center of London . Together with the other royal parks, it forms the “ green lung ” of the city and is one of the largest and most famous inner-city parks in the world.

The parking area is divided into two halves by Serpentine Lake . The Kensington Gardens are directly adjacent to Hyde Park and were at the request of Queen Caroline in 1728 by the Drive West Carriage separately. Hyde Park is 1.4 km² in size, together with Kensington Gardens 2.5 km² and therefore larger than the Principality of Monaco . The park is named after Hyde Manor , an old manor house.

In the southeast at Hyde Park Corner there is not only the rose garden with the Boy and Dolphin Fountain and the Artemis Fountain, but also the monumental triumphal arch "Wellington Arch", the winner of the battle in honor of Arthur Wellesley, 1st Duke of Wellington near Waterloo . The entrance at Hyde Park Corner was originally designed by Decimus Burton (1800–1881). Green Park follows behind Wellington Arch.

On the northeast corner of the park is Speakers Corner , where anyone can make public speeches on any topic (except about the royal family in the broader sense), however and when they like.

Londoners pursue a variety of leisure activities in the park. You can swim, row and, with permission, even fish on the Serpentine Lake, which is over eleven hectares in size . There is a horse riding arena, a bowling alley and extensive lawns for picnicking and resting. Living in the park sparrows , Metrology and gray squirrels are so tame that they eat passers grains from the palm of his hand.

Since the publication of a Crown Lands Act 1851, in which public access to the royal gardens was regulated, there has been a partly comprehensive set of rules for the use of the park that is regularly adapted to local developments. Violations (such as cycling off the beaten track) will result in a fine of £ 50.

Numerous rock and pop concerts take place in Hyde Park every summer. B. on July 2, 2005 a Live 8 concert in front of 200,000 fans with many well-known artists. The appearance of the American rock band Bon Jovi in 2003 became one of the most famous.

For special events in the British royal family , such as birthdays, the King's Troop, Royal Horse Artillery in the park fires a gun salute , the number of shots being precisely defined by the protocol for each event.

During the 2012 Summer Olympics , the triathlon and open water swimming competitions were held here. Temporary grandstands for 3000 spectators were created in the start and finish area. The use of the park then required the creation of several hectares of lawn.

The park is accessible through the underground stations Hyde Park Corner on the southeast corner and Lancaster Gate and Marble Arch on the north side. There are also numerous bus stops to the north, east and south of the park served by many lines. In addition, the park is criss-crossed by several cycle routes.

The name of the park goes back to an old English measure of area. Its size originally referred to a piece of land that a free family and those dependent on them could support. In the Domesday Book of 1086 AD, a kind of first English land register, Hyde Park was mentioned for the first time with this name ("Manor of Hyde"), as one of three parts of the manor called "Manor of Eia". In 1536 the area was taken over by King Henry VIII , fenced in and could therefore be called a park for the first time. At that time, an old monk, Stephanus II, was commissioned to manage the complex so that it could be used for hunting - the last court hunt took place here in 1768. James I , in an effort to alleviate its unpopularity, opened the park to the public. During the English Republic under Lord Protector Oliver Cromwell , the feudal park was put up for sale in 1652 with other crown properties and sold in five parts. However, this sale was declared null and void.

In the 18th century, the glamorous horse-drawn carriage parade took place in Hyde Park, but at the same time it became the preferred venue for duels , as Daniel Defoe and Jonathan Swift testify in literary terms . The “dark side” of Hyde Park also includes its tradition as a place of execution . The "Tyburn Tree" near the village of Tyburn on the northeast corner of the park was a triangular gallows for 24 people. The exhumed body of Cromwell was also displayed here. Time and again, however, attempts were made to maintain the park's “higher” rating. At the beginning of the 18th century , for example, Queen Anne forbade the doorkeepers to sell schnapps and only single-horse carriages and wagons were not allowed to enter. 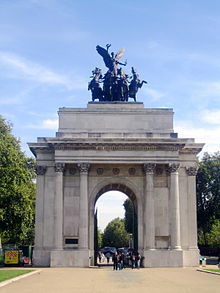 At the suggestion of Prince Albert , the Great Exhibition was held in Hyde Park in 1851 , the first world exhibition . Here, too, there were initially concerns that the exhibition might lure the “dispossessed masses” into the elegant park. For the event, Joseph Paxton built the now defunct Crystal Palace as a prefabricated exhibition building in the form of a monumental glass house . Over time, Hyde Park developed into a real people 's park and also a center of political agitation. As early as 1855, around 150,000 people demonstrated against the high food prices, and large rallies have been held here until recently. An example of British freedom of speech in a smaller sense is Speakers Corner , which is still visited by many tourists today .

On July 20, 1982, the IRA bombed the Blues and Royals on South Carriage Drive in Hyde Park while they were on their way to the Changing of the Guard at Buckingham Palace . Three soldiers were killed immediately, and another died three days after the attack. The remaining soldiers were seriously injured, but tourists watching the parade were also hit and injured by bomb fragments. About an hour later, a second bomb was detonated in Regent's Park .

On July 6, 2004, Queen Elizabeth II inaugurated the Princess Diana memorial fountain . The monument encompasses an area of ​​50 × 80 m and cost 3.6 million pounds (approx. 5.4 million euros). The fountain was designed by the American landscape architect Kathryn Gustafson . The oval stone ring made of granite , in which the water flows in two directions at different speeds, is supposed to represent the turbulent life of Diana.