The Millennium Stadium ( Welsh Stadiwm Mileniwm ) in the Welsh capital Cardiff , United Kingdom . As a result of a sponsorship contract , it has been officially called Principality Stadium ( Welsh Stadiwm Principality ) since January 2016 . The event arena with a closable roof is the country's national stadium . It offers space for 73,931 spectators and is preferably used for rugby , but also for football or concerts . At the time of its opening in June 1999, it was the largest stadium in the UK, now the own Old Trafford in Manchester and the Twickenham Stadium and Wembley a larger capacity. The owner is Millennium Stadium plc , a subsidiary of the Welsh Rugby Union (WRU).

Aerial view of the stadium from May 2016

On the site of today's Millennium Stadium, the Cardiff Arms Park , there were previously two stadiums, the national stadium opened in 1969 for games of rugby and football teams and a smaller stadium from 1881 for the home games of the Cardiff RFC . In 1995 Wales was awarded the contract to host the 1999 Rugby Union World Cup . The newer national stadium was demolished in 1997 because it could not be expanded and access was very limited.

The new stadium was then built on the same site, but rotated by 90 ° , for which some office buildings adjoining to the south had to be demolished. The construction costs amounted to 126 million pounds . The National Lottery took over 46 million, the remainder was covered by bonds and loans. The opening match took place on June 26, 1999, a friendly match between the national rugby union teams of Wales and South Africa . Wales won 29:19, the first victory the team ever had over South Africa. During the Rugby Union World Cup in 1999, seven games were played at the Millennium Stadium, including the final.

On September 8, 2015 it was announced that the Millennium Stadium will be named Principality Stadium from January 1, 2016 . The sponsorship agreement with the Principality Building Society runs for ten years and is worth approximately £ 15 million.

As part of the COVID-19 pandemic in the UK , a temporary hospital called Dragon's Heart Hospital ( Welsh Ysbyty Calon y Ddraig ) with around 2,000 beds was opened inside the stadium in April 2020 to relieve the hospitals in the Welsh capital and the surrounding region, built. The temporary construction has laboratories and a radiology station , among other things . At the official opening on April 20, Prince Charles thanked everyone who made the project possible in a video message.

The stadium offered a total of 74,500 seats for rugby and football matches by 2019. The Welsh Rugby Union expanded the area with wheelchair-accessible spaces in spring 2019. 46 new places were created. A total of 214 places are available. There are also 111 seats for supervisors. The capacity fell to 73,931 spectators. It was built around four 93 meter high masts that make it the second tallest building in Wales. According to the stadium classification of UEFA , the Millennium Stadium is classified in category 4.

The Millennium Stadium is the home of the Welsh national rugby union team , which has played all home games here since 1999. This includes in particular the games at the Six Nations tournament and the November international matches against teams from the southern hemisphere.

Occasionally, when the audience is very interested, the stadium is also used for championship games of the Cardiff Blues and for matches in the European Heineken Cup and the Anglo-Welsh EDF Energy Cup . Two finals of the Heineken Cup were played here, namely in 2002 and 2006; in 2008 Cardiff was again the final venue. In addition, three group matches and a semi-final of the 2007 Rugby Union World Cup took place here. Two quarter-finals and several preliminary round matches of the Rugby Union World Cup 2015 were played in the Millennium Stadium.

So far, the Millennium Stadium has hosted three finals of the European Challenge Cup . Millennium Magic took place for the first time in 2007 . This is a two-day event in May when an entire round of the Super League with teams from England and France is played (three games each on Saturday and Sunday). 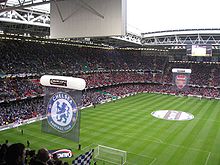 Since 2000, the Welsh national football team has played most of its home games at the Millennium Stadium, alongside a few games at the Racecourse Ground in Wrexham . When London's Wembley Stadium was rebuilt, numerous play-offs in English football competitions were played here from 2001 to 2006, as the Millennium Stadium was by far the largest stadium in the country at the time. These include the finals of the FA Cup , League Cup , Football League Trophy and FA Community Shield, as well as the Promotion Playoff finals of the Football League . During the 2012 Olympic Games , eight preliminary round games, two quarter-finals and the men's small final of the Olympic football tournament took place here. The 2012 Olympic Games kicked off in the stadium: the opening game of the women's Olympic football tournament, which the Great Britain team won 1-0. The 2016/17 UEFA Champions League final took place in the stadium on June 3, 2017 . 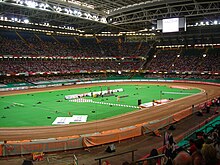 A Speedway Grand Prix has been held here every year since 2001 . In 2007, over 41,000 spectators watched the race, which is still the record for a British speedway race. In September 2005, as part of World Cup scoring Wales Rally for the first time ever, a rally held race at a hall. The lowest levels of the spectator area were dismantled to create a circuit in the shape of an eight. The Millennium Stadium is also the venue for numerous British rally and motocross races.

The main fight of the first boxing evening at Millennium Stadium contested on July 8, 2006 the British heavyweights Matt Skelton and Danny Williams . On April 7, 2007, Joe Calzaghe and Peter Manfredo faced each other in a WBO world championship match in the super middleweight division in front of 35,000 spectators. Calzaghe, world champion of the WBO, boxed on November 3, 2007 in front of 50,000 visitors against the Danish Mikkel Kessler , world champion of the WBA and WBC . On October 28, 2017, the British heavyweight world champion , Anthony Joshua , boxed against the French Carlos Takam in a sold-out stadium in front of 78,000 spectators . The 39-year-old visitor record for a boxing match in a hall was broken. Muhammad Ali fought on September 15, 1978 for the WBA heavyweight world championship against Leon Spinks . 63,315 spectators followed the fight in the New Orleans Superdome . Anthony Joshua competed again on March 31, 2018 in an IBF / IBO / WBA / WBO title union bout against New Zealander Joseph Parker at the Cardiff stadium. Once again it was filled with 78,000 visitors.

The stadium has been used several times as a backdrop for film and television productions. Dalek , an episode of the BBC's science fiction series Doctor Who , was made largely here in October and November 2004, with the underground areas providing a base in Utah in 2012. Also, The Christmas Invasion , another Doctor Who series, was filmed in the underground area of the stadium. Furthermore, individual scenes of the Bollywood film play in good and bad days ( Kabhi Khushi Kabhie Gham ) in the Millennium Stadium.

The scene shown in the film 28 Weeks Later , in which Flynn takes the children with the helicopter, was not shot in the newly built Wembley Stadium, as shown in the film, but in the Millennium Stadium. 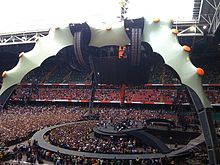 U2 during their 360 ° tour in the Millennium Stadium

In addition to sports, concerts of various musical styles are regularly held in the Millennium Stadium. The best-known concert gave the Manic Street Preachers on the eve of the millennium, followed by a performance by the BBC choir on the following New Year's Day 2000. On 22 January 2005, was charity concert Tsunami Relief Cardiff for the Tsunami Victims of the earthquake in the Indian Ocean on 26 December 2004 in the stadium. The concert raised a total of £ 1,248,963 . Rock and pop stars who have performed here include Eric Clapton , Madonna , Robbie Williams , U2 , Red Hot Chili Peppers , The Rolling Stones and Bon Jovi , among others .

The interior with the roof open in February 2008

Millennium Stadium in August 2012 with the roof closed