This article is about the soccer cup competition in England. For the Thai Cup of the same name, see FA Cup (Thailand) . 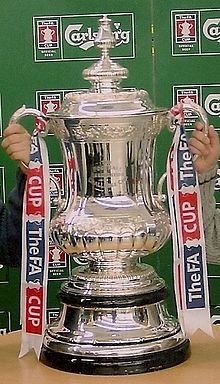 The competition is a round-robin competition whose pairings are determined randomly by lot. There are no seeded teams. The lot also decides which team has the home game right. If the game ends in a draw, there will be a second leg on the other team's pitch. If the second leg also ends in a draw, there will be extra time and a possible penalty shoot-out . There used to be more replay games in such a case, so that occasionally up to five games were needed to find a winner. The semi-finals take place in a neutral place. The final will normally be played at Wembley Stadium in London . While the stadium was being rebuilt, the finals took place at the Millennium Stadium in Cardiff . The 2001 final became the first FA Cup final to be played outside of England.

The competition begins in August with the extra preparatory round for teams that do not play in the professional leagues. Any team that is a member of the Football Association, whose ability corresponds to a certain standard of performance and which has an appropriate playing field can participate. 763 clubs took part in the 2011/12 season. The extra preparatory round is followed by the preparatory round, four qualifying rounds, six normal cup rounds, the two semi-finals and finally the final. All teams in the Football League can participate, as can all teams that took part in the FA Vase or FA Trophy in the previous season and are allowed to play in a recognized league for the current season. All participating teams must have a stadium with adequate and safe capacity.

The teams from the top leagues are exempted from some of these rounds: Teams from the Nationwide Conference will compete from the fourth qualifying round, teams from League 1 and League 2 of the Football League will meet the winners of the fourth in the drawing of the first main round in November Qualifying round. Football League Championship and Premier League clubs take part in the competition from the third main round. This traditionally takes place on the first weekend in January. The final takes place at the end of the season in May. Tottenham Hotspur claimed to be the only team from outside the league to have won the FA Cup in 1901 (they played in the Southern League at the time and only became members of the Football League in 1908). At that time, however, the football league only consisted of two divisions with 18 teams each. Thus, the victory then is comparable to the victory of one of the back teams from the First Division today.

The team that wins the cup qualifies for the group stage in the Europa League . If the cup winner is already qualified for an international competition via the Premier League, the league sixth of the Premier League moves up.

In the FA Cup there were numerous victories of lower class teams against teams from higher leagues. Yeovil Town , then in the Southern League , reached the fifth main round in 1948/49 and later beat several professional teams before they made it to the Football League in 2003 . The AFC Bournemouth struck 1956/57 the Wolverhampton Wanderers and Tottenham Hotspur . He was only defeated by Manchester United in a competitive quarter-finals . Hereford United beat Newcastle in 1971. In a game of the fifth round met in 1977/78, two such teams meet: AFC Wrexham from the Third Division had Bristol City beaten and Newcastle, the amateurs of Blyth Spartans had Stoke City defeated. Wrexham won the replay in front of a large crowd in St. James' Park in Newcastle. In the subsequent round, Wrexham was beaten by Arsenal . A few years later, Wrexham took revenge when it beat Arsenal in the 1992 replay in Wales . This is particularly noteworthy given that Arsenal were English champions the previous season and Wrexham ended that season at the bottom of the table. In 2008, the second-rate club beat Barnsley FC to Liverpool FC in the second round at Anfield 1 by 2. In the quarter-finals that followed, Barnsley won 1-0 against Chelsea with a goal by Nigerian striker Odejayi in the 66th minute of the game at their home in Oakwell Stadium .

The Arab airline Emirates has been the main sponsor of the cup since the 2015/16 season , which is why it has been sponsored by the Emirates FA Cup since then .

The Arsenal won the Cup with 14 wins most often. Two teams won the Cup for three consecutive years: Wanderers FC (1876–1878) and Blackburn Rovers (1884–1886). Leicester City has not achieved a victory in four finals. The finals without a win are shown in the FT column .

A double of a different kind was celebrated by Chelsea in 2007 when it won the League Cup in addition to the FA Cup .

In 1999, in addition to the double, Manchester United was the only English club to date to achieve the triple by winning the Champions League .

In 2001 Liverpool did not win the championship, but won the League Cup and UEFA Cup in addition to the FA Cup . This less prestigious triple success is derisively referred to as the Tin Pot Treble by opposing fans .