Preston North End (officially Preston North End Football Club ) - also known by the nickname The Lilywhites or PNE and North End for short - is a professional English football club . In 1889 he was the first English football champion and also the first double winner. In total Preston has won two English championships and twice the FA Cup . The club currently plays in the English EFL Championship , the second English division. The club's hometown is Deepdale in Preston , Lancashire . The main rival is Blackpool FC .

Founded in 1880, PNE was one of the founding members of the English Football League in 1888 and won the first league championship (1888-1889). The club was also the first to score a double : FA Cup (1889, 3-0 against Wolverhampton Wanderers ) and championship in one season. This double was more than exceptional, as the championship was won without a single defeat - something that was not repeated in the upper leagues until the 2003/04 season by Arsenal FC . The cup was even won without conceding a single goal. During this time the team was known as The Invincibles and was made up of a collection of local and Scottish players famous for their eccentric behavior. 1890 succeeded in repeating the previous year's success in the championship.

Preston North End played in the top two divisions of the league continuously until 1970. In 1938 Preston won the FA Cup for the second time (against Huddersfield Town 1-0). The Lilywhites' attendance record, which is still valid today, dates back to this year when 42,684 spectators came against Arsenal on April 23 . 1970 North End rose for the first time in the Third Division , but came back as champions in 1970/71 in this league straight back. The club could not hold its position, however, and rose again in 1985 to the Football League Fourth Division . During the 1990s , Preston was revived by manager David Moyes and made it up to the Football League Championship . Until the summer of 2006, the club was successfully coached by former Motherwell boss Billy Davies , who then moved to Derby County . With him Preston finished 5th in the Football League Championship 2004/05 with 75 points and thus had the chance to reach the Premier League in the play-offs . The first leg in the semi-finals was won 2-0 at home against Derby County, the second leg ended 0-0. In the final in Cardiff Preston North End lost to West Ham United 0-1 and missed promotion. A year later Preston reached the play-offs again in fourth place, but failed in the semi-finals at Leeds United .

Due to a 22nd place in the 2010/11 season , the club rose after seven years in the Football League One . After an unsatisfactory start in League One 2011/12, coach Phil Brown was dismissed on December 14, 2011 and replaced on an interim basis by Graham Alexander and David Unsworth . In 2015 they returned to the Football League Championship with a 4-0 win in the play-off final against Swindon Town . 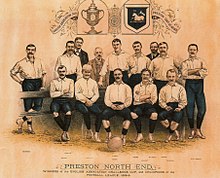 Clubs in the English EFL Championship in the 2020/21 season