William "Bill" Shankly , OBE (born September 2, 1913 in Glenbuck , East Ayrshire , † September 29, 1981 in Liverpool ) was a Scottish football player and coach . He was particularly popular as coach of Liverpool FC during the successful era of the 1960s and 1970s.

Shankly was born the youngest of eleven children in the small working-class town of Glenbuck in southern Scotland . He started his football career at the local club, the Glenbuck Cherrypickers , which was dissolved before Shankly could play a game with the first team. He then finally came to England to Carlisle United via Cronberry Eglinton . After one season, he moved to Preston North End in 1933 , where he made a name for himself as a combative midfielder and stayed until the end of his career as a player in 1949.

Shortly after his retirement, Shankly took a job as a coach at his former club in Carlisle. Already there he put his own philosophy into practice, completely turned the club that was stuck in the Third Division and reached 3rd place with him in his second season. But because of disputes with the management, he moved to Grimsby Town , which he also left after a short time and without much success. As a result, he tried a fresh start with the provincial club AFC Workington . The respect that the team earned under his leadership, Huddersfield Town from the Second Division became aware of him. Initially only entrusted with the juniors, he soon rose to become the first team coach. However, there were again disputes with the management, which sold the best players. So an offer from Liverpool in November 1959 came in handy. Shankly finally achieved great success with Liverpool. In 1962, the team rose to the First Division , the top division in England at the time, only to win the sixth championship title in the club's history two years later. The following year Liverpool won the FA Cup and shone the following season when the club not only won the championship, but also surprised in the European Cup Winners' Cup and narrowly lost the final. After winning the title in 1966, a longer dry season followed. The team was getting older and no new players were bought for a long time. It was only after a generation change that they won the championship and the UEFA Cup in 1973 . This made Liverpool one of the greats in Europe. In the following season, the Reds were relegated to second place in the First Division by Leeds United , but could win the FA Cup. After 43 years in professional football, including 15 years as a coach at Liverpool, Shankly announced his retirement in July 1974.

Bill Shankly had his own philosophy when it came to football. This is evidenced by his most famous quote:

“There are people who think football is a matter of life and death. I do not like this configuration. I can assure you that it is much more serious. "

Shankly saw football not only as a sporting, but also a cultural and political issue. Once he said: "I am a man of the people - only the people count." That is why the supporters were as important to him as the players. The avowed socialist Shankly saw his political ideal embodied in his conception of football: “In socialism, which I believe in, everyone works for the other and everyone receives a part of the profit. This is how I see football, this is how I see life. ”The focus was on the team, which is why Shankly attached great importance to the unity of the team and playing with the heart. Overall, Shankly was not as successful as his successor Bob Paisley , but he went down in history as the coach who made second division Liverpool one of the best teams in the world. 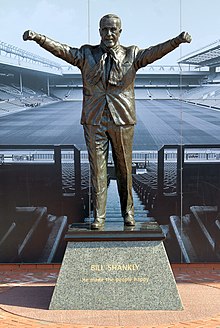 In honor of Shankly, a life-size bronze statue of him was erected in front of the legendary Kop on Anfield Road . It bears the inscription: He made the people happy - He made people happy. Shankly's ashes were scattered on the lawn of the stadium on Anfield Road after his death.

Success as a player

Success as a trainer