The Second World War ends with the official surrender of Japan on September 2, 1945 .

1945: Japan surrenders on the USS Missouri

1873: Inauguration of the Victory Column 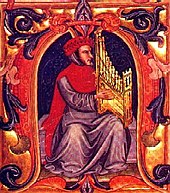 Landini with laurel wreath and portative (illustration from the Squarcialupi Codex )