Solar storm is a redirect to this article. See also: Burg Sonnensturm .

A geomagnetic storm is defined by the changes in the geomagnetic field it causes . Among other things, the Disturbance storm time index (Dst-Index) is used for classification, which indicates the globally averaged weakening of the horizontal earth's magnetic field based on measurements from some measuring stations distributed around the world. This value is determined every hour and is available in almost real time . There are many influences on the magnetic field, so fluctuations in magnetic flux density of ± 20 nT are normal. For comparison: In Central Europe the horizontal component of the normal earth's magnetic field is around 20 µT.

The disturbance is triggered by shock wave fronts from the solar wind , which are caused by solar flares or coronal mass ejections (KMA) and take around 24 to 36 hours to reach Earth. It lasts about 24 to 48 hours, in individual cases several days - depending on the cause of the malfunction in the sun . The impact of the shock front, consisting of electrically charged particles, on the magnetosphere leads to a weakening of the earth's magnetic field, which reaches its minimum after about twelve hours.

A geomagnetic storm is typically divided into three phases:

The recovery phase ends when normal value is reached and can last between 8 hours and a week.

Magnetic storms can have a variety of effects, the best known being the occurrence of polar lights ( aurora borealis or aurora australis ) in temperate zones such as central Europe. In electrical power networks , the geomagnetically induced currents triggered can lead to direct damage to power transformers. 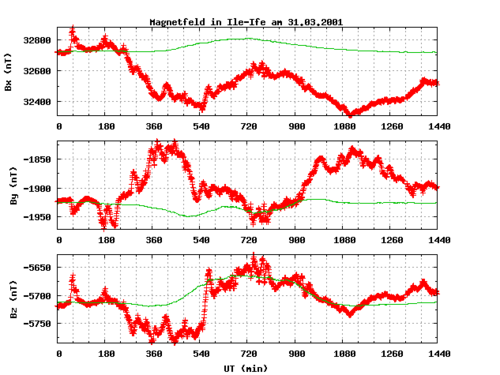 Temporal fluctuations in the earth's magnetic field due to a magnetic storm on March 31, 2001, measured in Ile-Ife , Nigeria. The time in minutes ( GMT ) is plotted on the abscissa, the magnetic field strength in nanotesla [nT] (minute mean) on the ordinate. The green curve shows the sq-gait (without magnetic storm) in Ile-Ife.

First of all, magnetic storms influence the earth's magnetic field, which in turn affects the formation of the Van Allen Belt . In the event of particularly strong magnetic storms, all living beings are exposed to increased cosmic radiation , especially in the polar regions , because the earth's magnetic field generally provides less protection there. As trees grow faster in increased solar activity, they have an 11-year period in their annual rings . The reasons for this have not yet been clarified.

Among other things, temporary changes in the ionosphere can interfere with radio transmissions (e.g. radio or mobile communications ). In elongated electrical conductors such as overhead power lines , compensating currents of sometimes considerable strength can flow, which can lead to the failure of the connected transformer stations. Pipelines are subject to increased corrosion during magnetic storms.

Before the shock wave front hits Earth, it can cause damage to satellites . In addition to the direct damage caused by current induction, as on the earth's surface, this is also possible in another, more indirect way: The shock wave can lead to local heating and thus to a deformation of the upper atmosphere , which leads to increased air resistance for satellites in low orbits ( Low Earth Orbit , LEO). Changes in path or increased fuel consumption would then be the result. Overall, the European Space Agency ( ESA) has estimated that in recent years, satellite failures alone have caused damage of more than $ 500 million. This and the distortion of the transit times that occur when the signals pass through ion clouds make GPS satellites particularly vulnerable.

The effects of a geomagnetic storm like the Carrington event in 1859 would be devastating today. Because at that time there was neither internet nor was the world as globally networked and dependent on the power supply as it is today. In 2014, researchers proposed a space weather early warning system consisting of 16 satellites . The US military classifies the effects of a severe magnetic storm as a military attack. The British Royal Academy of Engineering also sees clear dangers, but is more cautious.

Various findings, for example an increased 14 C content in wooden parts that can be precisely dated using the annual rings , point to events, for example in the years 660 BC. AD, 774/775 AD and 993/994, which are mainly interpreted as magnetic storms or "solar storms" (for the event of 774/775, however, a gamma ray burst from a celestial body about 3000 light years away is also considered as the cause ). These events could have exceeded the Carrington event of 1859 (see below) in its intensity on the earth's surface several times over.