Ile-Ife ( Ilé-Ifẹ̀ ; Ifé ) is the holy city of the Yoruba with 186,856 inhabitants. It is located in the state of Osun in southwest Nigeria and is the seat of Obafemi Awolowo University. The highest ranking king of the Yoruba, the Oòni, has his palace here.

Myth of the origin of the world 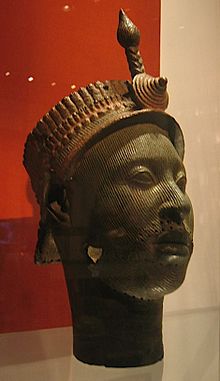 Brass bust of an Oòni by Ife from the 12th century, in the holdings of the British Museum [3]

According to the most important myth of Ile-Ife, the world is said to have been created here. The high god Olúdumàrè had initially given his son Obàtálá the order to create the earth in the primeval ocean , but he got drunk with palm wine. When Odùduwà , who had been forwarded to him, saw his brother sleeping off the intoxication, he stole the bag with the instruments of creation and created the dry earth in its place: he scattered sand from the pocket of creation onto the primeval water and the tap he had brought along scratched the sand and thus expanded the land over the water. To this day, the members of individual clans in the city - who traditionally consider themselves the descendants of certain gods - argue about whether Obatala also had a certain share in creation. The Itapa New Year , celebrated by most of the clans of Ile-Ife, consists in part of a cult-dramatic update of the primordial creation process. The name Ilé-Ifẹ̀ is an allusion to these myths: ilé - "house / place" and ifẹ̀ - "scratch, scatter". It is also said that Obatala made the people here out of clay. According to these creation myths, the traditional priests of the city still maintain their cult festivals for the benefit of all of humanity.

Parallel to the creation myth, there is a legend in Oyo that Oduduwa had to flee Mecca. He then immigrated via Bornu and Gobir to Yorubaland, where he settled in the as yet uninhabited place of Ile-Ife. Later there was a conflict between him and Obatala, in the course of which Obameri, General Oduduwas, is said to have expelled Obatala from the city. This banishment into exile is still the main theme of the cult drama of the Itapa festival today. On the other hand, it is said that the seven or sixteen sons or grandsons of Oduduwa left Ile-Ife to found the rest of the Yoruba states, as well as the Kingdom of Benin . Oranmiyan is said to have been the founder of both Oyo and Benin.

The oldest archaeological traces of Ile-Ife go back to the 4th century BC. Cultural parallels and the legend of the origins of Oyo indicate that the founders of the state left the ancient Near East at the end of the 7th century BC. Urban structures have been attested since the 11th century. The city's medieval heyday dates back to the 13th century and is characterized by the paving of potsherds in some of the inner courtyards and paths. Ile-Ife has been the religious center of the Yoruba and some neighboring states since ancient times, while the Oyo empire gradually established itself as the political center of the Yoruba country. Also Benin belonged to the cultural sphere of influence of Ife, although it is outside the Yoruba-language area. The recent history of the city-state is particularly marked by the influx of refugees from the north as a result of the Fulani jihad against the Oyo empire since 1824. Even today, the Oyo refugees, the Modákéké , who live in the southwestern suburbs of Ile-Ife , are poorly integrated into the city, and violence has erupted until recently.

The Oòni of Ife is the spiritual head of all kings of Yorubaland. However, its dynastic origin is controversial. The descent of Oduduwa claimed by the Oòni today is unjustified, as he does not belong to the members of the Oduduwa clan. Rather, the Ooni is to be seen as an authority that stands above the traditional conflict parties of the creation drama. He is considered the last of the city's 401 gods or orisha and the only one who is able to speak. The current ruling king is Adeyeye Enitan Ogunwusi, who was enthroned in 2015.

Ife terracotta from the 12th to 14th centuries

Ile-Ife is known for its stone, terracotta and bronze sculptures dating back to the 10th century, the latter being made using the lost wax technique. Most of the naturalistic sculptures are of great art historical value. The discoverer of the naturalistic art objects was Leo Frobenius . During excavations in the Olokun grove in the north of the city and other sites in 1910, he succeeded in uncovering a large number of naturalistic art objects, which he made known to the outside world through his comprehensive publication two years later. Most of them are now in the Ethnological Museum Berlin-Dahlem . Frank Willett made new important discoveries in 1957 in Ita Yemoo on the northern edge of the city. The most valuable finds from Ile-Ife are exhibited in the National Museum in Lagos. Further finds can be seen in the Ife Museum, which is located on the edge of the palace complex.

For each of the traditional 201 or 401 deities Ifes, the cult adepts celebrate a festival that often extends over several days. The festivals, some of which are still celebrated today, used to cover the entire urban area and also included sacred groves outside the city. The most important festivals are still the 13-day Itapa festival for Obatala and Obameri , the 7-day Edi festival for Moremi and the mask-wearing Oluyare and also the 7-day Olojo festival for Ogún . The festivals are of great cult-dramatic complexity. They involve processions, cult meals, cult acts in shrines, temples , sacred groves in and outside the city, as well as in the palace, in which the members of different cult groups often interact. At the Itapa festival there is a amalgamation of the creation myth and the myth of "God who dies and rises again". At the center of all these religiously motivated celebrations are the palace and the person of the sacred king (in fact , the king has not participated in the festivities for several years).

Despite the support of the local administration, Christianization and Islamization have led to a progressive neglect of tradition in today's world. Imbued with their mission for all people, the traditional priests continue to pray during the annual festivals and on other occasions not only for the blessings of their cult group but also for that of the city, the Nigerian nation and the whole world.

In addition to the Ife Museum, there is primarily the palace, the outer courtyard of which visitors can enter without difficulty if kindly requested. However, it is advisable to have a local translator accompany you in order to be able to get in touch with the informative palace servants. Also worth seeing is the “Staff of Oranmiyans” (“Grandpa Oranmiyan”) in the Oranmiyan grove in the south of the city. It is said that shortly before his death, Oranmiyan threw his insignia baton on the market square after using it as a deadly weapon against the people. This is said to have transformed into the more than five-meter-long monolith on which the hammered nails were sometimes interpreted as Phoenician letters. The pottery museum in the north of the city was built on the spot where the statues of Ita Yemoo were discovered. The Idena grove west of the city, where the primordial deity Ore is worshiped, is also of some interest. The statue of the so-called Idena guard and some ancient stone animals were found here. For security reasons, these and other objects belonging to the property of the cult groups are now kept in the Ife Museum.

States of the Yoruba