The title of this article is ambiguous. Further meanings are listed under Monolith (disambiguation) .

Monolith ( ancient Greek μονόλιθος monólithos , German 'uniform stone' or literally 'one stone', from μονο- mono- 'single' and λίθος líthos 'stone') is a more general term for a naturally created or worked stone block, the consists entirely of the same type of rock.

The corresponding adjective monolithic is also used in a figurative sense and then usually means something like “compact”, “from one piece” or “synchronized”.

The granitic ledge El Capitan in Yosemite National Park in California is often referred to as a "monolith" ...

... just like Mount Augustus in Western Australia. However, this expression is unsuitable for both objects for different reasons.

The word “monolith” can be found in various contexts in scientific and popular scientific literature, and in English-speaking countries also in publications with a focus on geology or geomorphology . However, it is not indexed in numerous geological dictionaries. The fifth edition of the Glossary of Geology (2011) gives the following meanings:

The first two meanings of the word, which are directly related to geology and geomorphology, are reflected in the designation of several geographical objects as "monoliths" which, apart from relatively steep walls and a flat summit plateau, have little in common. This includes:

On closer inspection, however, the term “monolith” is rather unsuitable for some of these objects. Mount Augustus and possibly also the Phobos monolith consists of more than one type of rock, the rock of the Devils Tower is strongly fissured and El Capitan is not a really independent morphological structure. In addition, the term “monolith” is mainly used in archeology , where it usually refers to hewn natural stone objects broken out of the natural rock (see below ). Because of this lack of definition and ambiguity, “monolith” as a geological-geomorphological term should be avoided if possible.

* a so-called profile monolith that is a few decimeters wide, high and deep 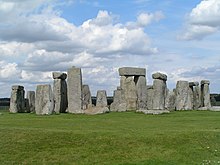 The megalithic of Stonehenge in southern England consists of several sandstone monolith.

The rock temple at Mahendravadi near Kanchipuram , India, was carved into a large boulder .

The terms “monolith” or “monolithic” are used not only for natural objects, but also in particular for objects created by human hands or at least modified, such as for

The Buddha statues from the Bamiyan valley (Afghanistan), the Jain statue Bahubalis from Shravanabelagola (India), the colossal heads of the Olmecs from Veracruz (Mexico), the moais from Easter Island and the presidential heads from Mount Rushmore (USA) are also regular described as "monolith" or "monolithic".

In the novel and film 2001: A Space Odyssey by Arthur C. Clarke and Stanley Kubrick , a black, perfect cuboid monolith, the edges of which have a length ratio of 1: 4: 9, can be interpreted as a symbol of extraterrestrial intelligence. As an allusion to this, several video games that focus on the colonization of planets or moons use a type of monolith to indicate that intelligent life had been there. For example, in the last phase of the evolution-based video game Spore, you can place a monolith on a planet populated by primitive life forms in order to bring them faster into the space age.

At the Swiss national exhibition Expo.02 in the Three Lakes Region , the French architect Jean Nouvel installed a walk-in sheet steel cube with an edge length of 34 meters in Lake Murten and named it “Monolith”.