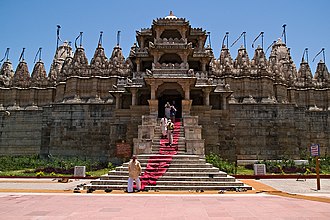 Tirthankara statue in a Jain temple in Mumbai (Bombay)

The spiritual leaders of Jainism are referred to as Tirthankaras ("ford preparers") to clarify their function as mediators between the material and the spiritual world. The religion got its name from the honorary title Jina (“winner”) used for its historically tangible founder Mahavira . Many Tirthankaras are given the honorary title arihant ("winner", "conqueror"). In the Tamil culture , the Jains are called samanar (from Sanskrit श्रमण, śramaṇa), which means something like “ascetic”, “hermit”, “monk” etc.

The Kalpa Sutra , a Jain scripture, lists 24 Tirthankaras. The stories of Rishabha , the first Tirthankara, as well as Neminatha , Parshvanata and Mahavira , April 22–24. Tirthankaras are described in more detail in this book. Only the last two are considered historical figures. Mahavira ( Sanskrit "the great hero") founded Jainism in the 6th century BC. BC, while its predecessor Parshvanata is said to have lived around 350 years earlier.

According to the dualistic-oriented conception of Jainism, ages ( Kalpa ) in which human virtues and spiritual abilities grow and those of decline alternate forever. Twenty-four tirthankaras appear in each age. The present aeon is considered an age of decline.

Marble ornament in the main temple in Ranakpur 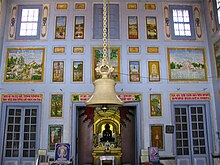 Interior view of a Jain temple in Sarnath

Richly decorated parapet in a Jain temple in Jaisalmer

The mountain Parasnath is said to be named after Parshvanata , on which, according to legend, he reached his nirvana . With its 24 temples, which symbolize the 24 Tirthankaras, the mountain is an important place of pilgrimage.

Other well-known Jain shrines are

But there are also one or more Jain temples in almost every major city in India.

Like Buddhism, Jainism has its roots in Brahmanism , the predecessor religion of Hinduism . According to the tradition of the community, the first tirthankara was Rishabha or Adinath (around 1500 BC), an ascetic in the city of Pithunda, which Mahapadma Nanda later destroyed. From the mythological chain of the 24 Jainist prophets, the last two, Parshvanata and Mahavira , can perhaps even be historically proven.

Parshvanata or Parsnath, the 23rd Tirthankara (around 870 BC) was the son of a king of Benares . He canceled wealth, became an ascetic and received absolute knowledge. He founded eight churches, which may also have Mahavira, and is believed to have died at the age of 100.

Vardhamana Mahavira, son of King Siddhartha, was born in Kundalpur in the Kingdom of Vaishali (today Bihar ). Some sources date his birth to 599 BC. BC, i.e. before Buddha (approx. 560 BC), others assume that Mahavira was younger than Buddha and 539 or 549 BC. Was born. Mahavira's mother Trishala , the messianic mission of Mahavira had been foretold in a dream - a clear parallel to the dream of Mayan , the mother of Buddha. Similar to Buddha, Mahavira left his family and kingdom at the age of 28 to 30, left everything behind and became an ascetic. For twelve years he lived secluded in forest and mountain regions and led a life in a monastic existence until he returned to society to preach his teachings.

In contrast to Buddhism, Jainism is not directed as a reaction against the nobility of Brahmanic society, but sees itself embedded in traditional philosophical convictions. Mahavira was on the one hand the founder of a new, independent teaching, on the other hand he was looking for reforms of the existing system. Hinduism saw no competition in the new teaching because of its rigor.

The first king of the Maurya Empire in the 4th century BC Chr., Chandragupta Maurya , is said to have left his throne in old age and become a Jain ascetic. After this time, Jainism spread to southern India, where a large part of the community emigrated to. Many Indian kings converted to and supported Jainism. Jainism also flourished in the east of India in Andhra Pradesh and Orissa , the sphere of influence of Mahavira. In western India he established himself in Gujarat under the rule of Kumarpal .

The Islamic invasion in the 13th century hindered the spread of Jainism, but did not lead to its disappearance, as a high level of self-discipline and monastic commitment ensured resistance. An adaptation to Hinduism in the Middle Ages was the adoption of caste rules in a weakened form. 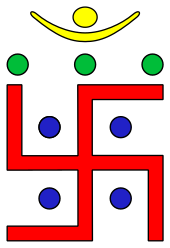 The swastika , one of the most widely used symbols in Jainism

Jainism assumes that there are two opposing principles in the world: spiritual and unspiritual. The spiritual is based on an infinite number of individual souls ( Jiva ). The unspiritual encompasses the five categories: movement, rest, space, matter and time. Everything material is animated, not only people and animals, but also plants and water.

However, the original purity and omniscience of the soul ( jiva ) is tarnished by subtle substances that enter as a result of karma . The Jiva can be categorized according to the respective degree of purity through color, olfactory , haptic and taste gradations. B. the possible color spectrum of the Jiva ranges from black, dark blue to dove gray, fire red, yellow to white. For example, a yellow spirit monad attests the wearer with balanced traits. Any karmic act, whether intentional or not, forces one to remain in the cycle of rebirths ( samsara ) until all karma has been erased.

A purification of the soul is achieved in Jainism through a moral way of life and strict asceticism. If a soul is freed from all impurities, it rises to the highest heaven in order to remain there in calm bliss. However, not all souls reach this stage. The abhavya jivas (“incompetent souls”) can never be released from samsara due to their natural disposition.

The three universal basic ethical principles, tellingly also known as the Small Vows ( Anuvratas ) of the lay followers of Jainism, are Ahimsa (non-violence towards all immanent forms of existence), Aparigraha (independence from unnecessary possessions) and Satya (truthfulness).

Because of the ideal of non-harming living beings, Jains eat in such a way that animals do not suffer or die for it and that plants are only harmed to the inevitable extent. They usually have a (lacto-) vegetarian diet , some also vegan . The Indian city of Palitana has been declared a vegetarian city as many Jains live there.

Due to these principles, followers of Jainism do not practice every profession, which is why, for example, they often work in commerce and banking (e.g. Anshu Jain ), i. H. work in the cities. Because of the strict lifestyle, the Jain community was never very large. Because of the non-violence requirement, lay people could neither work in agriculture (living creatures could be injured when plowing), nor were they allowed to engage in warfare .

This ethical rigorism, which at the same time bears a strong soteriological character - even without a Christian redeemer figure - sometimes leads in extreme cases in older Jain monks, who have been purified by tapas exercises (mortification and meditative practices), to such an extent that they get through samlekhama (hunger fasting and physical passivity) completely emptied of the world, since this is the only way to protect the jiva from renewed karmic defilements (whether positive or negative).

According to their religious conception, the Jainas form two sects, the Digambaras , "air-clad people" in the southern regions of the Indian subcontinent, whose monks traditionally live in complete nudity according to the images of their founder Mahavira, and the Shvetambaras , the "white clad" mostly in the northern Indian states .

The obvious differences are mainly in the doctrinal understanding of tradition, which results from the respective interpretation, interpretation and the authority of the literature. For the most part, only the Shvetambaras sect take the position that the canon, i.e. H. the sutras and agamas, should be placed within the scope of a sacred corpus of scriptures.

According to some followers of Jainism, the origins go to the non-Aryan period, the so-called Dravidian period in the 3rd or 4th millennium BC. BC back. Mahavira was therefore only the last of a long line of Jaina teachers. As in Hinduism, the followers of Jainism estimate their own religion to be much older than religious scholars and Indologists.

The heterodox religion (because it does not recognize the Vedas ) was always opposed by the Brahmins , but after a heyday in the Middle Ages it has survived until today.