Silver coin of the Maurya Empire

The Maurya ( Sanskrit , मौर्य, maurya) were an ancient Indian dynasty , in the period between 320 and 185 BC. BC, whose empire succeeded the Nanda state .

Founded around 320 BC From Chandragupta Maurya († around 297 BC), the empire had its starting point in Magadha , which represented the Indian heartland from antiquity to the Indian early Middle Ages .

Chandragupta Maurya fled from the last Nanda ruler from Pataliputra and fought against the garrisons left behind by Alexander the Great in the Indus Valley . When and under what circumstances he succeeded in taking Pataliputra and overthrowing the last Nanda king is unknown. The first campaign seems to have failed, but in the second it occupied around 320 BC. The land and took over Magadha's royal dignity. The nandas were considered the epitome of greed in later literature. Thus, according to Greek and Indian sources, shortly after Alexander's incursion into India, the Nanda Empire was replaced by the Maurya Empire under Chandragupta and his mentor Kautilya .

Chandragupta is also known through a contract with Seleucus I Nikator, the successor to Alexander . In India, Seleucus closed in 303 BC. A peace with Chandragupta (Greek: Sandrokottos ), the first representative of the Maurya dynasty at this time, in which Seleucus renounced part of the dominion and received 500 war elephants in return . Seleucus had marched into the Hindu Kush in order to take over the inheritance of Alexander there too. Chandragupta successfully met him in the Punjab . In exchange for the war elephants, Chandragupta received 303 BC. All areas east of Kabul (the ancient regions Gedrosien , Arachosien , Gandhara and Paropamisaden ). Seleucus sent the envoy Megasthenes in 302 BC. To the court of Chandraguptas. Megasthenes wrote an extensive report on the Indian Empire. So he describes z. B. seven professional groups that play a role in Indian life. He reports that the king is the owner of all land. Spies and watchdogs play a major role in political organization. The impression of a tightly organized state is created. However, the observations of Megasthenes relate primarily to the capital and the immediate hinterland. 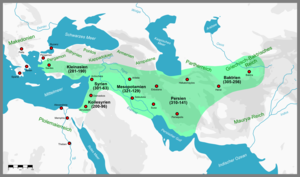 In the northwest, the Maurya Empire bordered the Greek Empire of the Seleucids . The affiliation of the satrapies was given in the respective pre-Christian calendar.

In the same breath as Chandragupta's politics, his minister is named Kautilya (or Chanakya), the author of Arthashastra . The kingdom of Chandragupta seems to be a direct implementation of the political maxim demanded in Arthashastra. Kautilya recommends the spies mentioned by Megasthenes in Arthashastra as a means of politics.

Allegedly, Chandragupta is said to have turned to Jainism . According to Jain tradition, he fasted himself to death in Karnataka .

Under Chandragupta's son Bindusara (around 297–268 BC) the empire expansion continued and came to an end with the conquest of the kingdom of Kalinga (area of ​​today's Orissa ) under Emperor Ashoka (268–232 BC). Greek ambassadors also appeared at his court, such as Daimachos in the ( 3rd century BC ) and (possibly) Dionysius , who like Megasthenes today wrote lost works about India (“ Indica ”). In the case of Dionysius, however, it is unclear to which Indian ruler he functioned as envoy; maybe it was Ashoka (see below).

The immediate zone of influence of the Maurya Empire in its greatest territorial extent at the time of Emperor Ashoka from 268 to 232 BC. Chr.

Samrat Ashoka , a younger son of Bindusara, ousted his brothers in a coup with the help of his minister Radhagupta, and took power himself. Under this emperor, the Maurya dynasty developed into the largest empire in ancient India, which encompassed the entire Indian subcontinent to the extreme south, as well as today's Pakistan and Afghanistan. However, from the lack of inscriptions in the dean , one concludes that there are regional weak points in the power structure.

Under Ashoka the Maurya empire reached its greatest extent. The area is estimated at around 5,000,000 km² and the population at around 50-60 million, which makes it one of the most populous empires of antiquity.

The emperor - after the extremely bloody conquest of Kalinga got into a deep crisis - converted to Buddhism and from then on shaped his politics according to the principles of the teachings of the Buddha , in which peacefulness and tolerance are the top priority goals. He created the first state known from history in which the renunciation of violence and social welfare are the pillars of a just policy.

The empire ended with the disempowerment of the last Maurya of Magadha, Ashoka's grandson Brihadratha, by his general Pushyamitra in 185 BC. He founded the Shunga dynasty on the "ruins" of the Maurya Empire , but very little is known about it, despite a 112-year rule, due to the lack of sources .