This article deals with Buddha the "awakened" as portrayed in the early Buddhist tradition and the scriptures. For the "historical person" see Siddhartha Gautama . For other meanings, see Buddha (disambiguation) and Buddhism . 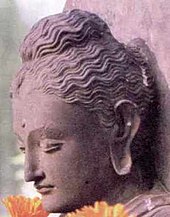 Siddhartha Gautama (or Buddha Shakyamuni - The sage of the Shakya family ) 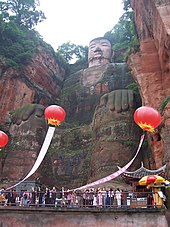 Buddha ( Sanskrit , m., बुद्ध, buddha, lit .: "the awakened", Chinese  佛 , Pinyin fó , Japanese 仏 , ぶ つ butsu , Vietnamese佛phật or ? bụt ) refers to a person in Buddhism who is Bodhi (lit .: "Awakening"), and is the name of honor of the Indian founder of religion Siddhartha Gautama , whose teaching established the world religion of Buddhism.

In Buddhism, a Buddha is understood as a being who has achieved the purity and perfection of his mind through his own strength and has thus achieved a limitless development of all potentials present in him: perfect wisdom ( Prajna ) and infinite, but at the same time desireless, compassion ( Karuna ) with all living things. He had already achieved nirvana during his lifetime and, according to Buddhist belief, is no longer bound to the cycle of reincarnation ( samsara ). Awakening is of a transcendent nature, cannot be grasped with the mind , is "deep and unfathomable like the ocean", which is why this experience eludes a description in linguistic terms. Their quality is incomprehensible to people who have not had this experience themselves.

A Buddha experience occurs very rarely according to the Buddhist tradition; therefore, an age when a Buddha appears is a "happy age". Because there are very many "dark" ages in which no Buddha appears and therefore no teaching of final liberation can be followed. The Buddha of the next age is said to be Maitreya , while Kashyapa , Kanakamuni and Dipamkara were three Buddhas of the past. Tantric Buddhism ( Vajrayana ) in particular knows an abundance of Buddhas, which are also called transcendent Buddhas, Adibuddhas ( five Dhyani Buddhas ) or Tathagatas .

The word “Buddha” means “the awakened” and in Sanskrit and the Middle Indian languages ​​derived from it is the root form of the past participle of the verbal root budh (“awaken”). The nominative of the word "Buddha" in Sanskrit is Buddhas , in the Middle Indian Pali language, Buddho , and some researchers therefore use these forms. However, since Indian words based on the model of local lexicographers and grammarians are not used in the nominative but in the root form in occidental science, the form Buddha has become commonplace.

From birth to starting a family 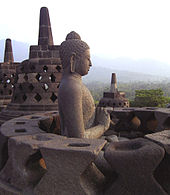 Siddhartha Gautama lived around 500 BC. Christ in North India; Lumbini is considered his birthplace . His father Suddhodana was the head of one of the ruling families in the small aristocratic republic of the Shakya in the north of India in what is now the Indian-Nepalese border area. References to the royal status of the Buddha's father as well as to the pomp and ceremonies at his court, which one encounters particularly in later texts, are most likely exaggerations; however, it is likely that the family at least belonged to the nobility. His mother's name was Maya and she died seven days after the child was born. The parents called their son Siddhattha (in Pali ) or Siddhartha (in Sanskrit ), which means "who has achieved his goal". The epithet Shakyamuni refers to his origin and means "the wise one from the lineage of Shakya". After the birth of Siddhartha, it was predicted that he would either become a ruler of the world or, when he realizes the suffering of the world, one who would bring wisdom into the world. He lived in a palace where everything that was part of a good life was available to him and where, according to tradition, he was shielded from all worldly suffering. His father saw in him the ideal successor and wanted to prevent Siddhartha from turning away from his kingdom. As a result, he was rarely allowed to leave the royal palace, and when the streets were previously cleared of the old, the sick and the dying.

From the exits to the awakening

Siddhartha was informed by the Indian deity Brahma that he promised in his last life to use his next life to free humanity from suffering. 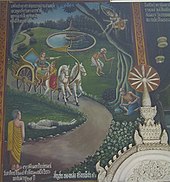 The four exits: Siddhartha meets an old man, a fever patient, a corpse and an ascetic in Buddhist monk clothing

One day, however, he was confronted with the reality of life and the suffering of humanity and recognized a pointlessness in his previous life: the legend tells of encounters with an old man, a febrile patient, a rotting corpse and finally with a monk, whereupon he decided to look for a way out of general suffering. (However, it is very difficult to separate legends from facts in the “biography” of the Buddha.) At the age of 29, soon after the birth of his only son Rahula (“fetter”), he left his child, his wife Yasodhara and his homeland and became an ascetic in search of salvation . For six years the ascetic Gautama wandered the Ganges plain , met famous religious teachers, studied and followed their systems and methods, and subjected himself to rigorous ascetic exercises. Since none of this brought him any closer to his goals, he gave up the traditional religions and their methods, looked for his own way and mainly practiced meditation . He called this the " Middle Way " because he eschewed the extremes of other religious teachings.

Siddhartha Gautama “reached” the complete awakening ( Bodhi ) at the age of 35 . This happened on the banks of the Neranjara River near Bodhgaya (near Gaya in today's Bihar) under a poplar fig , which is revered today as the Bodhi tree , "Tree of Wisdom". According to legend, an offshoot of that fig tree was planted in Sri Lanka while the Indian tree withered. From there, another offshoot was later taken and planted in the original location in India (near the temple district of Sarnath, which was excavated in 1931).

His life as a teacher

After the Bodhi experience, Gautama, the Buddha , gave his first discourse in the wildlife park near Isipatana (today's Sarnath ) near Benares in front of a group of five ascetics, his former companions. These five became the first monks of the Buddhist monastic community ( Sangha ). From that day on he taught and spoke for 45 years to men and women of all classes, kings and peasants, brahmins and outcasts, moneylenders and beggars, saints and robbers. He accepted the distinctions that still existed in India through the caste system as a given, but emphasized their inessentiality for following the path he taught.

Buddha is said to have died at the age of 80 and entered Parinirvana .

The aftermath of his life

At the first Buddhist council ("the five hundred"), which was held in a cave at Rajagriha (Rājagṛha, Pali: Rājagaha) immediately after the enlightened had died out, Ānanda, who was known for his excellent memory, is said to have reproduced the discourses. Mahakashyapa recited the Abidharma and Upali the monastic rules.

Tradition reports that at this council a canon of doctrine ( Dharma ) and one of religious discipline ( Vinayapitaka ) were compiled. A text that is supposed to report on it, Kāśyapasaṃgīti-sūtra, is preserved in the Chinese canon (Taishō No. 2027).

From a religious-phenomenological point of view, Gautama embodies the type of “founder”, “mystic” and “teacher” as a religious authority. The American universal historian Jerry H. Bentley , like many other scientists before him, pointed out striking parallels in the life of Jesus and Buddha.

There are three types of Buddhas:

The “ perfectly fully awakened” (pali: sammásambuddha ) describes a person who, after it has been lost to the world, rediscovered the teaching leading to liberation and perfection from within , who realizes it and teaches the world based on its extensive teaching Skills and merits can lead numerous people to liberation.

“A person himself recognizes the truth in things that have not been heard before, and in it attains all-knowledge and mastery in the powers. This person is referred to as a 'fully enlightened'. "

The teachings peculiar to all Buddhas, each time rediscovered by them and revealed to the world, constitute the four noble truths (sacca) of suffering, its arising, its extinction and the eightfold path leading to liberation from suffering .

The way leading to the realization of Samyaksambuddha is (according to original teaching) the way of the Bodhisattva .

The "individual awakened" (pali: paccekabuddha ) describes a person who rediscovered and independently realizes the teaching leading to salvation, but does not preach it, does not teach other people, does not lead it to liberation.

“Here a person himself recognizes the truth in things that have not been heard before, but he does not attain universal knowledge in them and mastery in the powers. This person is referred to as the 'single enlightened'. "

The "as a listener-Awakened" (pali: savakabuddha ) or Arhat , means a person who learns the leading to liberation doctrine and practice as a student of a Samyaksambuddha or also Sravakabuddha and fully realized. He is in turn able to teach the Dhamma / Dharma to other people and lead them to liberation.