Starting up is a redirect to this article. To start up a nuclear reactor, see Nuclear Reactor # Initiation and Control of the Chain Reaction . 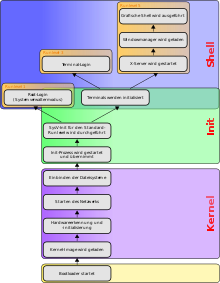 Booting ( English pronunciation [ ˈbuːtən ]; from English: to boot ), booting , starting or booting refers to the loading of a computer's operating system , as is usually required after switching on. The word boot is a short form of bootstrap loading , which means loading via bootstrap .

The boot process of a computer takes place in several stages. After switching on, a simple program is first read from a small read-only memory (ROM). This program allows a more complex program to be started, which then starts an operating system, for example. In early computers (before the 1970s) there was often no read-only memory (ROM); the first stage of the boot process had to be written into the memory by hand using the machine console (keyboard) so that the operating system could then be read from external storage devices. On all currently used computers and computer-controlled devices / systems, the boot process begins automatically after being switched on.

Since a computer loads a program during the boot process that it needs to function, figuratively speaking it pulls itself out of the swamp like Munchausen by its own hair . In English it is the bootstraps , hence the term boot .

When a PC is booted , the processor begins to process the firmware stored at a specified memory address in the ROM. In general, this carries out a test of the connected devices ( POST ) and checks storage devices such as floppy disk drives, hard drives or CD / DVD drives etc. whether they are or contain bootable media . Depending on the specific firmware implementation, the search sequence according to which these devices are accessed, e.g. B. can be changed via firmware setup or via the boot menu .

On IBM PC-compatible computers up to the 2010s, this firmware is usually the BIOS . In PCs after around 2010, it was increasingly being replaced by the (Unified) Extensible Firmware Interface , EFI or UEFI for short. Even Macs use since switching to Intel processors in 2006 an Apple-specific EFI.

A bootable medium requires a valid boot sector on a PC with a BIOS, as was introduced with the original IBM PC model 5150 from 1981 . On larger data storage media such as hard disks, this is usually the master boot record (MBR), which also contains the partition table . The process of booting begins when the boot sector is loaded and executed by the BIOS. Since the boot sector is limited to a block size of 512 bytes, it usually contains a boot loader that reloads further data, for example by looking for special files on the storage medium and then loading and executing them until B. the kernel and finally the entire operating system has been started. This process, in which a program loads the next one, also known as chain loading referred ( English chain for chain, as in chain of command and chain of command ). With boot managers who join this chain early on, it is possible to change the boot process and e.g. B. to implement an additional boot menu for multi-boot systems .

On the BIOS successor Extensible Firmware Interface (EFI), which was introduced by Intel at the end of the 1990s and which has been jointly developed by several PC manufacturers in the hardware and software sector since 2005 as " Unified EFI" (UEFI) an EFI loader is loaded directly from a specified partition, the EFI system partition (ESP). By specification, the ESP is a partition of any size formatted with the FAT32 file system and defined in a GUID partition table . The EFI loader is an executable program of the respective processor architecture that was either found on a data memory found and checked by the firmware or that was specified directly by an entry in the NVRAM of the (U) EFI, possibly including start parameters. As the successor to the BIOS, many (U) EFI implementations also have a compatibility module , the Compatibility Support Module (CSM), which emulates a BIOS and can therefore continue to start IBM PC-compatible boot sectors. If this module is available and the function is configured (activated) accordingly, the UEFI loads the CSM automatically if a data carrier with a master boot record (MBR) is found and is to be started by default in the firmware setup or selection in the boot menu. When the Secure Boot is activated , the CSM is not available.

Like the boot code in a boot sector, the EFI loader is also referred to as the boot loader. Bootloaders are computer programs whose task it is to advance the boot process. In a few cases, the bootloader is already the last stage in the boot process, for example with PC booters .

When installing an operating system , it is first booted from a bootable medium such as a CD or DVD in an optical drive or from a USB stick. However, the firmware must support this type of bootable media. On this there is usually an adapted version of the operating system to be installed - if the start process of this installation medium is successful, it automatically loads the installation program of the operating system. This sets up a data storage device such as B. a hard disk, a functioning boot configuration for the respective system, such as boot sectors and start files on the corresponding partitions.

With PXE, Intel has specified a method for booting PCs ( IA-32 ) and Itanium computers ( IA-64 ) over a computer network .

Cold start
(English cold boot ), in which the computer is booted up "from zero" after switching on the operating voltage (see also reset )
Warm start
( warm boot ), in which the routines for hardware initialization in particular are not executed. Depending on the computer architecture and operating system, the execution of the warm start can differ greatly. For example, the AmigaOS operating system offers the possibility of receiving current data in a "reset-proof RAM disk " via a warm start. With PCs of the x86 architecture, on the other hand, each boot means the loss of all data currently in the (volatile) RAM .

Modern operating systems offer the possibility of accelerating the startup process. Depending on how the computer was shut down, a distinction can be made between the following methods:

Suspend to disk
Also called the state of rest or hibernating (English for "wintering"). Before switching off, the entire memory content is written to the hard disk and written back to the memory during the boot process.
Suspend to RAM
Confusingly, also called standby mode . The computer is not switched off, but all buffer contents are written to the RAM and most of the devices and a large part of the CPU are shut down.

The acceleration is based on the fact that a restart, as with a complete shutdown, is avoided and only the previously saved memory content is loaded, i.e. a kind of warm boot with memory retention is possible.

If a computer does not boot (no longer starts), this can have various causes. Sources of error include incorrect settings in the firmware

If the computer is started for the first time after a configuration change, it should be checked, for example, whether cables are missing or incorrectly connected, whether components with plug connections (e.g. RAM ) are making proper contact and, only with older hardware: whether any jumpers for the IDE or SCSI - hard drives are set correctly.

If no screen display appears, the number of beeps emitted by the BIOS on x86 computers can provide an indication of the error (see List of BIOS beeps ).

In some cases, the BIOS causes error texts such as B. DISK BOOT FAILURE, INSERT SYSTEM DISK AND PRESS ENTERdisplayed on the screen. A live system such as Knoppix or UBCD can be used for troubleshooting .