As IA-32 , an abbreviation for " Intel Architecture 32-Bit ," Intel describes the architecture of the x86 processor from the 80386 , originally as 32-bit architecture . With the instruction set extension x64 , however, the 64-bit x86 architecture is also included.

The x86 instruction set architecture is being further developed by Intel and AMD.

Since x86 had been the most widespread processor architecture for personal computers worldwide since the 1980s , there were a large number of existing programs that had to be reprogrammed for the Itanium processor - or: should have been programmed.

The address bus is 32 bits wide and therefore addressability is limited to 4  GB (physical address space). Exceptions are the 80386SX , which only had a 24-bit address bus. Starting with the Pentium Pro , an address extension to 36 bits was achieved using PAE ; later generations even more, e.g. B. 40 bits on the AMD K8 . With 36 bits, 64 GiB can be addressed, so that more than 4 GiB can be used in a 32-bit environment with restrictions if the PAE is implemented by the operating system. For example, Linux uses the PAE extension automatically if it is supported by the processor - PAE is even a prerequisite for newer distributions, since it can also use the NX bit . Under Windows from Microsoft, however, PAE is not used due to compatibility problems with existing drivers, so that 32-bit versions of Windows are limited to 4 GiB of RAM.

In addition to the real mode , in which the conventional main memory and the upper memory area , that is the first, lower megabyte of the main memory, can be addressed without restriction via offset and segment , compatible with the 16-bit Intel-8086 , the Intel Architecture 32- Bit two or three further operating modes:

The new virtual memory management is primarily designed for multitasking operation ( protected mode ). Using the Memory Management Unit (MMU), several programs in the memory can be executed quasi-simultaneously without conflict. For this purpose, each program is executed in a (virtual) memory space in which it exists on its own and therefore cannot have memory access conflicts with other programs, so that memory protection is achieved (e.g. "Program A mistakenly overwrites a variable in the memory in program B" can no longer occur). The MMU achieves this via a table ( TLB ) in which the real physical address of a memory block is noted for the last localized virtual address of all programs. With every access (requesting memory, writing or reading), transparently for programs and programmers, a clear physical address is diverted. Another positive effect is that memory fragmentation of the physical memory can no longer occur. The address translation enables the MMU to present the program with almost any fragmented physical memory as a continuously accessible block of virtual memory. This is an effective mechanism as long as the size of the physical memory is significantly smaller than that of the virtual address space (4 GB). Due to the continuously falling RAM memory prices, this is no longer the case; the virtual memory space can no longer always conceal the fragmentation of the physical memory, since it can now itself be too fragmented. 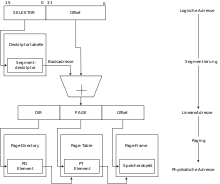 The IA-32 architecture uses a 48 bit wide segmented logical address, which consists of 16 bits of selector and 32 bits of offset. The segmentation translates the logical address into a linear 32-bit address and can then be translated into a physical 32-bit address using the paging mechanism . If the system does not use paging, the 32-bit linear address is the physical address.

These protective functions are implemented with various hardware mechanisms.

Further functions have been added in the following CPU generations: