The Intel 80486 or i486 microprocessor was developed by Intel as the successor to the i386 and was the first CPU of the 80486 generation on the market. The 486 (pronounced "eighty-six"), as the 80486 is often called, was manufactured under license by Intel's competitor AMD and sold as the Am486 . The clock frequencies of the i486 were 16 MHz (i486SX) to 100 MHz (DX4). As a successor, the manufacturer Intel developed the Pentium processor.

The 486 generation was released in 1989 and dominated the PC market from around 1992 to 1995. At first, the computers equipped with the 486 were very expensive and cost the equivalent of around 6,000 euros and more. They were therefore not or hardly affordable for normal users until around 1992. The 80486 is a processor, which in its first prototype still manages without active cooling and with suitably dimensioned housing ventilation even without a passive heat sink (80486DX33). A typical system this time had as a 120- MB - HDD , 4  MiB main memory , a VGA graphics card and operating system MS-DOS 5.0 with Windows 3.1 as a graphical user interface.

Significant changes compared to the predecessor i386 were the integrated (L1) cache and the integrated floating point arithmetic unit (sometimes switched off again in later SX versions).

The i486SX is an i486 with or without a switched off FPU . In this way, Intel was able to sell processors with defective floating point units as an inexpensive alternative instead of having to dispose of them.

The i486GX is a processor for embedded applications. The CPU can be used in battery-operated devices thanks to its very low energy consumption. In terms of equipment, it roughly corresponds to an i486SX, apart from the external 16-bit data bus.

These energy-saving versions of the i486s were often used in entry-level notebooks that did not need a lot of power. Both processors can be described as the first notebook processors, as they were specially made for them. However, it was not until many years later that Intel presented a special notebook processor with the Pentium MMX Tillamook.

An Intel i486 overdrive processor is intended for upgrading existing 80486 systems and is a special version of the respective i486DX2, i486SX2 and Intel DX4 processors.

In order for these overdrive processors to run in the older system environment, they have a predefined clock multiplication and ignore the external settings of the multiplier. In addition, they basically work with a 5 volt supply voltage. In the case of the overdrive version of the Intel DX4, there is a DC voltage converter on the processor surface , which generates the necessary processor operating voltage of 3.3 volts from the existing 5 volt supply.

The first OverDrive CPU is an i486DX2 presented in May 1992, which can be operated in an i486SX motherboard. This means that such a system can be retrofitted with an FPU that the i486SX lacks. The remaining variants of the i486 were then offered as OverDrive-CPU. 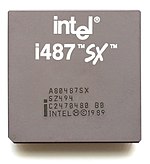 The i487 (code name: P32S / P23N) was the math coprocessor ( FPU ) for the i486SX processors. However, the i487 was not a real coprocessor, but a full-fledged i486DX. The i487 deactivated the i486SX and took over all processor functions in the computer. To make this possible, the i487 has an additional pin compared to the i486DX. This pin also prevents the i487 from being used independently as a full-fledged i486DX.

Commons : Intel i486  - collection of pictures, videos and audio files