Binary prefixes (also IEC prefixes or IEC prefixes ) are prefixes for units of measurement (unit prefixes ) that denote multiples of certain powers of two . They are mainly used with units such as bit (symbol “bit”, rarely “b”) or byte (symbol “B”) to measure data volumes , since for technical reasons, powers of two often occur here. Both the name ("kibi", "mebi", ...) and the associated symbol ("Ki", ​​"Mi" ...) are referred to as the unit prefix.

IEC prefixes for base 2

To avoid ambiguity, the International Electrotechnical Commission (IEC) proposed in June 1996 a new draft standard for binary prefixes that should only be used in the binary meaning. This draft was adopted as a standard in December 1998 and published in January 1999 as a supplement to IEC 60027-2 . He introduced the prefixes kibi , mebi , gibi , tebi , pebi and exbi for binary multiples of units. In these designations, the first two letters of the already standardized SI prefixes have been supplemented by “bi” for “binary”. For the symbols of the binary prefixes, the symbols of the SI prefixes were used and the lowercase letter "i" was appended to them, whereby the capital letter "K" was used for the kibi in contrast to the "kilo". The standard also pointed out that the SI prefixes should only be used for multiples based on powers of ten. These additions were integrated into the second edition of the IEC 60027-2 (2000-11) standard published in November 2000. The binary prefixes zebi and yobi were also included in the third edition of the IEC 60027-2 (2005-08) standard published in August 2005 .

Many standardization organizations followed this recommendation. These include the BIPM / CIPM (1998), the IEEE 1541 (2002) and especially in Germany the Physikalisch-Technische Bundesanstalt (2007) (others: NIST , CENELEC , DIN / EN ).

The International Bureau of Weights and Measures (BIPM), which is responsible for the SI prefixes, also expressly advises against the binary use of the SI prefixes and recommends the binary prefixes according to the previous IEC 60027-2, which is implemented by the worldwide ISO, for the designation of powers of two -Standard IEC 80000-13: 2008 (or DIN EN 80000-13: 2009-01) has been replaced with the same wording.

SI prefixes for binary multiples of base 10

Since there were no special unit prefixes for powers of two until 1996, it has become widespread to use the SI prefixes in connection with storage capacities to denote powers of two (with a factor of 2 10  = 1024 instead of 1000), which came closest to the desired powers of two. It should then follow from the combination with the units bit or byte or some other context that a power of two was meant. This binary use of the SI prefixes was also documented in a glossary by the IEEE in 1986 .

While this is not very problematic with memory modules , which are usually only produced in sizes of powers of two, this led to doubts about the exact meaning , for example when specifying hard disk capacities in GB or data transfer rates in MB / s or Mbit / s. In addition, the deviation becomes larger and larger for higher-value prefixes, so that it is often no longer negligible. There are also occasional mixed forms, for example with the storage capacity of a 3.5-inch diskette : 1.44 MB = 1440 kB = 1440 × 1024 bytes.

The International Bureau of Weights and Measures (BIPM) responsible for the SI prefixes therefore expressly advises against this non-standard use of the SI prefixes and recommends the binary prefixes in accordance with IEC 60027-2 for the designation of powers of two.

Nevertheless, this recommended way of naming was not very widespread in 2009 either (see also section Acceptance and Distribution ).

The following table provides an overview with values ​​of the possible SI prefixes and the closest powers of two as well as the percentage (rounded) differences:

Another approach that is sometimes used to indicate the intended deviation from the power of ten is to use the capital letter "K" (often only spoken as "Ka") instead of the lowercase letter "k" for the powers of two. For example, “k” can be used for 1000 units and “K” for 1024. However, this convention is neither standardized nor consistently applied. This approach cannot be transferred to the larger prefixes either, since the symbols for the SI prefixes from mega are written in capital letters (“M” for mega, “G” for giga and so on).

Ratio of binary and decimal prefixes 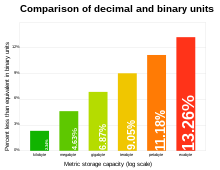 Relative differences for dec: am

The following table gives an overview of the resulting relationships:

An important component of a computer is the main memory , which today is usually implemented as semiconductor memory . The individual memory cells are addressed with the help of parallel, binary operating lines, which are collectively referred to as the address bus . Memory cells can be addressed with an address bus that has lines . Direct addressable semiconductor memories (RAM, ROM, (E) EPROM) are therefore usually produced in sizes of powers of two. With the increasing size of the memory, due to the lack of standardized alternatives, it became common to use SI prefixes with the memory units bit and byte in order to quantify powers of two, although the SI prefixes are based on powers of ten. In the case of data memories with sequential addressing or the sequential transmission of data, however, there is no reason to work with powers of two, so that the SI prefixes are mostly used in accordance with the standard. This leads to confusion, since it is usually no longer clear even to experts whether the respective SI prefix should be interpreted as a power of ten or, contrary to the norm, as a power of two. Hard drive manufacturers use both systems, powers of ten for memory sizes, powers of two for cache sizes.

For example, three different interpretations have become established in practice for the designation "1.44 MB":

This inconsistent approach can lead to errors that are difficult to understand when calculating with units, as shown in the following simple example:

A computer user wants to download a file with the specified size of "40 MB" from the Internet and has a data line with a data transfer rate of 8 Mbit / s available. The time required for the complete transfer of this file can be calculated with the conversion 1 B = 8 bit (simplified) as follows:

There are several options for a clean solution to this problem:

The introduction of the binary prefixes does not mean that they are intended to replace the SI prefixes for use with bits and bytes. For example, you can specify the size of a 2 30  B working memory with 1,073,741,824 B, about 1074 MB or just practical as exactly 1 GiB. This means that the SI prefixes can always be used clearly in their standardized meaning.

Which information makes more sense depends on the intended use, in particular on whether the background is binary addressing and whether this is relevant (such as the size of a semiconductor memory or the partitioning of a hard disk), or whether this background is no longer is relevant (e.g. when working with files on the same media later). However, working with powers of two can be more cumbersome when adding or subtracting amounts of data with different binary prefixes and when transitioning to larger or smaller binary prefixes than when using the SI prefixes tailored to the decimal system (such as 537 MB).

Parts of this section since 2009 seem out of date to be .
Please help to research and insert the missing information .

The IEC binary prefixes were hardly accepted in industrial and scientific literature as well as in software until January 2002 at least and were therefore rarely used. Even today, acceptance and spreading has only increased very slowly. In the information for authors, the IEEE specifically requires that SI prefixes be used only for powers of ten, but does not mention the binary prefixes. The computer magazine PC Games Hardware has been using them since October 2007. Apart from that, there are now some programs that support the binary prefixes, e.g. B. the Linux kernel , all Linux distributions, tools based on it such as partitioners ( GParted ), the GNU core utilities , KDE 4, phpMyAdmin , WinSCP and some BitTorrent programs. For Linux, the IEC standard has now been implemented seamlessly and the user can choose the output, or both sizes are displayed. From Mac OS X Snow Leopard (10.6) onwards, macOS goes the opposite way and uses SI prefixes, as they are standardized for SI units, also IEC-compliant only in their decimal meaning.