KDE is a community dedicated to developing free software . One of the best-known projects is the KDE Plasma 5 desktop environment (formerly K Desktop Environment , or KDE for short ).

In addition to the community of programmers, artists and other developers, there is a second pillar in the form of the registered association KDE e. V. based in Berlin, which, as a legal entity, takes care of financial and legal aspects of the project. 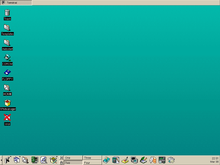 The project was launched on October 14, 1996 by Matthias Ettrich under the name Kool Desktop Environment . The programmers initially oriented themselves towards the proprietary Unix desktop CDE , which was already available at the time , both in terms of functionality and name. From the very beginning, however, they relied on an object-oriented programming language ( C ++ ) and an extensive, already existing interface library called Qt , which had been developed by Trolltech . In the course of development, the name Kool was abandoned, the K thus remained without any further meaning in the name.

On July 12, 1998, the final version 1.0 of the K Desktop Environment was published. This early version was received with mixed feelings by the Unix community : Many criticized the use of the non-free Qt user interface library. Due to the pressure exerted on Trolltech and the persuasion work of the KDE developers, Trolltech decided in April 1999 to make Qt available in a special, freer version that largely met the needs of the community. The final breakthrough followed with version 2.0 from October 23, 2000.

Core areas of software development according to the new brand strategy

On August 18, 2006, the KDE team released the first pre-release version of the new KDE software compilation 4 with the name Krash under version number 3.80.1. On January 11th, 2008 the final version 4.0 was published.

On November 6, 2009, the project founder Matthias Ettrich was awarded the Federal Cross of Merit for KDE .

In 2009 the formulation K Desktop Environment was also dropped. From now on , KDE only refers to the development community and the program package is known as Software Compilation ( KDE SC ). The new brand strategy has been in effect since November 24, 2009 . The first version released after the strategy change was formally 4.3.4 , but only version 4.4 Beta 1 bears this designation in the software.

The representation of the community to the outside takes the profit , in Germany registered association KDE e. V., which also holds the rights to the KDE brand and was founded in 1997. The association, based in Berlin, represents the members in all financial and legal matters and helps organize the conferences and meetings of the project members. The KDE e. V. has a five-person board, whose members are elected by a general assembly for a maximum of three years. It currently consists of Lydia Pintscher (President), Aleix Pol i Gonzàlez (Vice President), Eike Hein (Vice President and Treasurer), Thomas Pfeiffer and Andy Betts.

In some countries, KDE also has its own organizations. These are either freely organized (KDE India) or, like KDE e. V., given a legal form (KDE España). Others, in turn, cooperate with existing legal entities.

The Marketing Working Group , founded in November 2005, has set itself the goal of helping to better coordinate existing public relations projects and to supplement others. It currently consists of Carl Symons, Inge Walling and Jos Poortvliet.

In February 2006, a seven-person Technical Working Group was formed for the first time by the members of the KDE e. V. elected. This group is supposed to coordinate and plan the release of new KDE versions. It should also decide which software is to be added to or removed from KDE, how different programs are to be combined into modules and which dependencies between the modules and external software are to be allowed. In addition, it should accompany technical decisions that affect the entire KDE project and ensure that such decisions are well documented. Another task is to be a contact point for general technical questions regarding KDE and to establish contacts between different developers of the project. The Technical Working Group was initially elected for six months. After this time, their work was judged. The Technical Working Group was founded after a year by the Release Team , one of KDE e. V. replaced independent body.

Like many projects from the free software scene, KDE is mainly carried out by volunteer developers. In addition, some developers are paid by various companies to work on KDE. The developers, designers and other employees of the project organize themselves using the usual communication channels for open source projects of this size, such as mailing lists , wikis , web forums , newsgroups , the publicly accessible bug tracker and conferences . The most important conference is the annual academy, which takes place in a different European country .

KDE holds conferences and participates in other conferences related to free software . The two most important conferences hosted by KDE itself are Akademy and Camp KDE . Both are thematically and geographically large-scale events.

The Akademy has been held every summer since 2003 at different locations in Europe:

Camp KDE was the counterpart to the Akademy for the American continent. It took place annually in January from 2009 to 2011.

In addition to Akademy and Camp KDE, there are other conferences that are more closely structured:

Cooperation with other organizations

freedesktop.org is a collaboration platform with the aim of improving the interoperability of desktop environments on the X Window System . The KDE project is active within freedesktop.org to develop common standards with the Gnome project and numerous others.

On June 23, 2005 it was announced that the KDE project and the Wikimedia Foundation are seeking a cooperation. In particular, it was planned to offer content from Wikimedia projects via a web service interface for KDE programs.

KDE 3.5 has already started to integrate Wikipedia-supporting functions. The editor Kate received in this version Wikitext - syntax highlighting . The KDE music player Amarok displays information about artists from Wikipedia with the help of an embedded web browser and the KDE globe Marble integrates Wikipedia articles about cities in a similar way.

From April 2008 to September 2009 the KDE e. V. and Wikimedia Deutschland e. V. joint offices in Frankfurt am Main.

On August 22, 2008, KDE e. V. and FSFE announced that the KDE project after one and a half years working with FSFE's Freedom Task Force , the Fiduciary License Agreement FSFE will accept. This allows KDE developers to exercise their rights of use to KDE e. V. in order to be able to intervene more easily in the event of legal violations by others.

In September 2009, KDE e. V. and the FSFE have joint offices in Berlin.

Since 2009, the cooperation between KDE and the Gnome project has also gone beyond freedesktop.org , in which both organizations decided to hold their annual Akademy and GUADEC conferences together every two years . The first such joint conference was the Gran Canaria Desktop Summit from July 3rd to 11th, 2009. This was followed by another Desktop Summit in Berlin in 2011.

By using Qt as the basis for KDE software, relationships with Trolltech, which has since been taken over by Nokia , quickly developed . In June 1998 KDE e. V. and Trolltech jointly set up the KDE Free Qt Foundation to ensure the continued existence of Qt as Free Software. Trolltech also started hiring some KDE developers as a sponsorship measure.

The software development and consulting companies Intevation GmbH from Germany and the Swedish Klarälvdalens Datakonsult AB (KDAB) use Qt and KDE software - especially Kontact and Akonadi for Kolab - for their services and products, which is why both employ KDE developers .

Many distributors of Linux and other free operating systems take part in the development of the software they sell and are accordingly also active in the KDE project. This includes commercial distributors such as B. SUSE , Mandriva , Red Hat or Canonical , but also government-sponsored non-commercial organizations such as the Science and Research Council of Turkey with its Linux distribution Pardus .

KDE is one of the largest and most active free software manufacturers and publishes a wide variety of programs. These can be divided into three categories:

There are also other application compilations such as Calligra Suite , a program package with a focus on office software. This combines word processing , presentation program etc. and extragear. In Extragear are all those programs that do not take part in any cross-border coordinated development and instead pursue their own release cycles, but use KDE's infrastructure. Prominent representatives are Amarok and K3b . Other application programs are z. B. the video editor Kdenlive , which was previously developed independently and has now officially become part of the KDE applications.