from Wikipedia, the free encyclopedia
This is the spotted version , flagged on May 11, 2020 . There is 1 pending change that has yet to be viewed.

This article covers the city in Scotland. For further meanings, see Glasgow (disambiguation) .

Glasgow [ ˈɡlazgəʊ or ˈglɑːzgəʊ ] ( Scots : Glesga , Scottish Gaelic : Glaschu , officially City of Glasgow ) is the largest city in Scotland with over 625,000 inhabitants, ahead of Edinburgh and the third largest city in the United Kingdom after London and Birmingham . The city forms one of the 32 Council Areas in Scotland and is located on the River Clyde . In the late 19th and early 20th centuries, Glasgow had a population of over one million. In 2017, the Greater Glasgow and Clyde Area had 1,169,110 residents.

In contrast to the Scottish capital Edinburgh, Glasgow is considered a “working class city”. Glasgow has a 12th century cathedral and four universities ( University of Glasgow , University of Strathclyde , Glasgow Caledonian University and the University of the West of Scotland ), as well as the Glasgow School of Art and the Royal Conservatoire of Scotland (formerly the Royal Scottish Academy of Music and Drama ).

In a ranking of cities according to their quality of life, Glasgow ranked 50th out of 231 cities worldwide in 2018.

History and foundation of the city

For thousands of years people have settled on the site of what is now Glasgow, with the Clyde providing ideal conditions for fishing. Around 80 AD, the Romans settled the place, which was then called Cathures . Later, around AD 140, the Romans built the Antonine Wall , the remains of which can still be seen in Glasgow today, to separate Roman Britain from Celtic and Pictish Caledonia . Glasgow itself was founded by the Christian missionary Saint Mungo (also known as Saint Kentigern ) in the 6th century. He built a church on the site of the present cathedral and in the years that followed Glasgow became a religious center. The miracles attributed to Saint Mungo can still be found in the city's coat of arms. 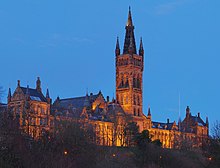 The history of Glasgow is vague until it grew into a city in the 12th century and construction of St Mungo's Cathedral began. In 1451, the University of Glasgow was founded by papal decree . By the early 16th century, Glasgow had become a major religious and academic center.

It was also around this time that the town's traders and skilled workers had gained considerable influence, which began to diminish the power of the church. The shipping traffic on the Clyde made Glasgow a bustling commercial center and gateway to Edinburgh and the rest of Scotland.

Glasgow's position at the center of the British Empire also made it the central hub for trade with the British colonies. Easy access to the Atlantic Ocean made it easier to import American tobacco , which was then sold across Europe. Trade with the Caribbean allowed the import of sugar. Since the 1770s, the desludging of the Clyde made it possible to continue up the river in larger ships, which laid the foundation for industrial and shipyard construction during the 19th century.

The abundance of coal and iron from Lanarkshire made Glasgow an industrial city dubbed the "Second City of the Empire". The cotton industry and textile production also flourished. Workers from Scotland, Ireland and the rest of Europe were drawn to the up-and-coming city. They often had to settle in overcrowded neighborhoods with poor housing like the Gorbals . Even after the Second World War, Glasgow had the highest population density of any major British city: there were 36.2 people per acre ; in Liverpool 31.5; 28.1 in Manchester and 13.5 in Edinburgh. The industrial revolution made Glasgow one of the richest cities in the world at the time. Wealthy traders financed spectacular buildings, parks, museums and libraries. Factories were built to be truly splendid, for example a carpet factory (Templeton's carpet factory), which was designed as a copy of the Doge's Palace in Venice. Large international industrial exhibitions were held here, for example in Kelvingrove Park in 1888 and the Empire Exhibition in Bellahouston Park in 1938 .

Glasgow also became an important center culturally. Numerous galleries opened up and extraordinary buildings arose, such as the Glasgow School of Art, built by Charles Rennie Mackintosh , or the (now reconstructed) Willow Tearooms by the same architect.

On January 31, 1919, tanks were used against strikers for the 40-hour week in the so-called 'Battle of George Square'. After the First World War, Glasgow suffered from the global economic decline . Although ships and trains continued to be manufactured in Glasgow, cheaper labor outside the city became a competition. The situation of the working class in the city worsened and an awareness of their own situation developed. The working class became increasingly politicized. The Glasgow workers sent a whole brigade to support the Spanish Republic in the Spanish Civil War of 1936–1939. The city's economy has been on a steep decline since the 1960s.

In the 1970s and 1980s, steel mills, coal mines, engine plants and other heavy industries closed in and around Glasgow, resulting in mass unemployment and the city's decline. Despite new ships such as the Queen Elizabeth 2 , one shipyard after another was closed. At the turn of the millennium there were only two shipyards, both of which were financed exclusively from government armaments contracts. Since the mid-1980s, however, there has been an arduous upswing due to structural change towards the service industry - a financial district was created. The former factory premises in the suburbs were used by the entertainment industry. 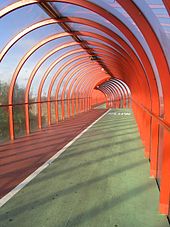 During the 1990s, Glasgow continually recovered from its decline. The city has invested large sums of money in the renovation and restoration of a large number of buildings over the past 15 to 20 years. As a result of this effort, the quality of life in the city has increased noticeably. In 1990 (instead of London or Edinburgh), Glasgow surprisingly became the 6th European Capital of Culture and was awarded the title UK City of Architecture and Design in 1999. In 2003, Glasgow became the European Sports Capital . With the structural change, Glasgow also got a modern culture and convention center, where numerous different events take place, including such as the science fiction world cons “Intersection” in 1995 and “Interaction” in 2005 with around 4000 participants. Tourism, sporting events and large conferences shape the image of modern Glasgow.

Particularly noteworthy is the variety of museums in Glasgow, almost all of which can be visited for free. One exception is the Glasgow Science Center , which requires entry. Major museums in Glasgow include the Kelvingrove Art Gallery and Museum , the Hunterian Museum and Art Gallery (at the University of Glasgow), the Center for Contemporary Art (CCA), and the Burrell Collection . The latter goes back to the private collection of William Burrell, who bequeathed it to the city.

With the Glasgow Science Center, the Glasgow Tower by Richard Horden and the Clyde Auditorium by Norman Foster , the city also has a lot to offer in terms of modern architecture .

Nevertheless, according to a study by the ONS in 2012, 30.2% of all homes were occupied by unemployed families. Many of the city's residents have no part in the upswing. In neighborhoods like Calton, due to the decline of the Scottish steel industry and the consequent phenomena such as mass unemployment, poverty, social misery and widespread alcoholism , the statistical life expectancy is 53 years. This high mortality, also in comparison with other de-industrialized British cities, is also referred to in medicine as the Glasgow effect . On the one hand, the reason given is generally higher mortality in Scotland compared to England and Wales. In Glasgow and the surrounding region in particular, elevated values ​​of long and serious illnesses, such as cancer, alcoholism and mental illness, especially in men, were found. A medical report gives the reasons: the fact that Glasgow has a particularly high population density from the outset compared with other British cities, the strategy of locating trained workers in new settlements on the outskirts of the city, which has been pursued by the London Office for Scotland since the 1950s The unskilled workforce remained, the construction of many high-rise buildings, which was unusual in British comparison, and the policy of the Glasgow city authorities since the 1980s, which focused more on the formation of property and the demolition of apartment buildings than on improving their quality.

Juvenile delinquency is widespread. Districts in the periphery such as Drumchapel, Castlemilk and Easterhouse are particularly affected. For most young people, however, participating in a youth gang is a rite of passage and they quit after a while; staying or growing into organized crime is less common than in other cities. Glasgow has long been the UK's highest homicide area. In 2007 there were 4.5 murders per 100,000 inhabitants. In 2012 the rate fell to 2.7 murders, but was still well ahead of London with 1.67 murders and the national average of 1.0 murders.

A report on the possible consequences of Brexit for Glasgow calls for the governments of Scotland and Great Britain to provide targeted support to the region, in particular a full replacement of grants from the EU.

Often dividing Glasgow in five districts ( English Areas or Disctricts a) but which do not correspond to administrative breakdown:

For elections to the city parliament, the Glasgow City Council , Glasgow is divided into 21 constituencies (" wards ").

The Liberal Democrats , however, lost their five seats in the City Council .

For elections to the British House of Commons , Glasgow is divided into seven constituencies . In the 2017 general election , the SNP won six constituencies and the Labor Party won one.

Historically part of the county of Lanarkshire , Glasgow has been one of the four counties of cities in Scotland since 1893, alongside Edinburgh , Aberdeen and Dundee . In 1975 Glasgow became a district of the Strathclyde region . At the same time, the places Rutherglen, Cambuslang , Baillieston, Garrowhill, Mount Vernon and Carmyle were incorporated into Glasgow from Lanarkshire . In 1996, Glasgow became the City of Glasgow Council Area as part of the introduction of a one-tier administrative structure . At the same time, some incorporations from 1975 were reversed. Rutherglen and Cambuslang were spun off again and have since been part of the South Lanarkshire Council Area .

Glasgow is also one of the Lieutenancy Areas of Scotland. 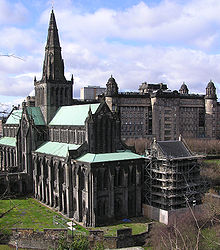 The city's two main train stations are Glasgow Central and Queen Street . Glasgow has the fourth oldest subway in the world. On December 14, 1896, the Glasgow Underground Railway , now the Glasgow Subway , opened its doors.

Local transport is organized by the Strathclyde Partnership for Transport (SPT) .

Glasgow is connected to the air traffic via the two airports Glasgow International and Glasgow Prestwick . While the former is served by numerous airlines from different countries, the latter is almost exclusively served by the airline Ryanair, which, however, also maintains an impressive route network from there.

The sporting scene in Glasgow is dominated by the two football clubs Celtic and Rangers and their traditional rivalry called Old Firm . The main football stadiums in the city are

A large sports complex was built for the 2014 Commonwealth Games , which was completed in 2012:

Sister cities of Glasgow are:

→ Main article : List of personalities from the city of Glasgow