This article covers the city in Serbia. For the band see Novi Sad (band) . 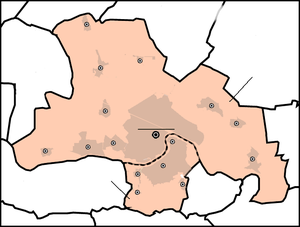 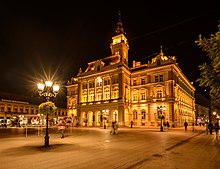 Liberty Bridge over the Danube 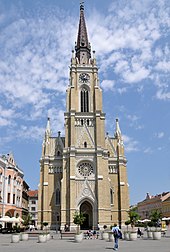 Marienkirche in the city center

The university town consists of the districts of Novi Sad north of the Danube and Petrovaradin at the foot of the fortress of the same name south of the Danube. According to the 2011 census, the city has 231,798 inhabitants. 341,625 inhabitants live in the greater area of Opština Novi Sad . The city lies at an altitude of 72 to 80 meters above sea level. In Novi Sad the Little Batschka Canal (as part of the Danube-Tisza-Danube Canal System ) flows into the Danube. The city is also known as the Serbian Athens .

The place arose in the late Middle Ages in the densely populated county of the Kingdom of Hungary through the construction of the Cistercian monastery Belefons as a so-called church place. In 1526 it was conquered by the Ottomans . Their 150-year rule led to the devastation and depopulation of the Pannonian Plain . Nomadic southern Slavs , tolerated by the Ottomans, took over existing villages or founded new settlements. However, the turbulence at the time usually did not allow for sustainable settlements. According to Ottoman records ( Defter ) from 1590, 105 Slavic families lived in what is now Novi Sad.

After the victory of the Austrians against the Ottomans (1697) under Prince Eugene at Zenta (Serbian Senta) and the subsequent peace treaty of Karlowitz (1699), the Ottoman Empire had to inter alia. cede the Batschka to Austria. After the publication of the Imperial Impopulation Patent (".. for better support, re-elevation and population of the same"), the Viennese court chamber planned an immediate resettlement of the Batschka , but this was soon postponed due to the priority of the military border ( Pantschowa , Timisoara, etc.).

As early as 1694, the Austrian military administration had built a bridgehead on the opposite bank of the Danube from the Peterwardein Fortress, around which a settlement with soldiers, craftsmen and traders, initially called Racka Varoš , grew . In German, the settlement was called Ratzenstadt , which meant Serbenstadt , because Raizen , Ratzen or Rac was an earlier German and Hungarian name for the Serbs , the inhabitants of Raszien . The settlement was later called Peterwardeiner Schanze . A settlement with around 1000 Slavic inhabitants developed around this bridgehead, which is today's old town. In the early years it was mostly Serbs, as only Catholics were allowed to settle in the opposite fortress Peterwardein (Serbian Petrovaradin).

In 1716 the Ottomans faced Novi Sad again, but were defeated by Prince Eugene in the Battle of Peterwardein .

According to rumors, the craftsmen and traders are said to have bought the status of the Free Imperial City for 80,000 forints from the Empress, because they no longer wanted to be residents of a military settlement, but citizens of a free trading city.

Novi Sad quickly developed into an economic and, above all, cultural center for the Serbs. In 1765 the first Serbian Orthodox seminary was established. In the Fruška Gora National Park opposite there are 17 Serbian Orthodox monasteries. In 1810 the first Serbian grammar school was opened in Novi Sad. Vuk Stefanović Karadžić wrote in 1817 that Novi Sad was the largest Serbian city in the world. In 1820 Novi Sad had 20,000 inhabitants, two thirds of whom were Serbs.

After the end of the First World War , the area around Novi Sad fell to the newly established Kingdom of Serbs, Croats and Slovenes , which from 1929 called itself the Kingdom of Yugoslavia .

In the period from 1941 to 1945 the city was by the Axis powers belonging Kingdom of Hungary occupied. In Novi Sad, the Hungarian commander, General Ferenc Feketehalmy-Czeydner, shot 1,246 civilians from January 21 to 23, 1942 , including 809 Jews, 375 Serbs, 8 Germans and 18 Hungarians. Several hundred civilians were thrown under the ice of the frozen Danube and drowned. After the partisans moved in at the end of 1944, almost the entire part of the remaining German-speaking population group, which had not yet fled, was expelled or murdered.

The single-track temporary bridge has replaced the Žeželj Bridge on the Belgrade-Budapest route in Novi Sad, which was destroyed by bombing in 1999, since 2000 .

Novi Sad was the target of air strikes by NATO during the Kosovo war in 1999 , which destroyed all bridges over the Danube, the regional water supply (which supplied 600,000 people), the radio building and the refinery. The city hospital, several elementary schools, a day-care center and several day nurseries were also damaged by the bombs.

For more than six years, traffic across the Danube was handled by a pontoon bridge that was only opened to ships three times a week. Since the reopening of the so-called Freedom Bridge on October 11, 2005, navigation has been unhindered again.

The following important information is missing from this section:
Local official languages ​​(Serbian, Hungarian, Slovak and Ruthenian / Batschka-Russian)
Help Wikipedia by researching and pasting it .

According to the 2011 census, the population of the city belonged to the following ethnic groups:

In 2021, Novi Sad will be European Capital of Culture alongside Esch (Luxembourg) and Kaunas (Lithuania) .

The largest sports club in Novi Sad is the Vojvodina Novi Sad football club . He plays in the SuperLiga , the top division in Serbian football . Vojvodina celebrated its greatest successes in Yugoslav football. It became Yugoslav champions in 1966 and 1989.