This article covers the city in Ireland. For the Irish county of the same name, see County Cork , for further meanings see Cork (disambiguation) .

Cork ( Irish : Corcaigh , regional pronunciation [ˈkoɾkɪg´] or [ˈkoɾkɪɟ] ) is the administrative seat of the county of Cork in the province of Munster in the south of Ireland .

The name Corcaigh means something like marshland. With a population of around 210,000 (2019 estimate), the city is the second largest city in the Republic of Ireland after Dublin . The metropolitan region has a total of around 350,000 inhabitants.

Cork is the seat of the Roman Catholic diocese of Cork and Ross , which dates back to the 7th century. Episcopal Church is the Cathedral of St Mary and St Anne from the beginning of the 19th century.

The heart of the city is on an island in the mouth of the River Lee .

According to legend, a monastery was founded on the river island by Saint Finbarr between 500 and 600 - the city of Cork itself mentions the year 606. Vikings have lived here since 846 and established a trading post here. The city was ruled by the Normans from the end of the 12th century.

In 1185, King John of England gave Cork city rights by charter. For much of the Middle Ages, the city was an outpost of English rule in a predominantly hostile environment of Irish clans, far from central English dominion of the Pale around Dublin . The urban regime was ruled by around 12 to 15 merchant families. They had acquired their wealth by trading with the European continent. The main exports were wool and hides, while the main imports were salt, iron and wine.

Around 1270, the Augustinian order settled in Cork on an Anglo-Norman call and founded a priory, now known as Red Abbey Cork .

The office of Mayor was introduced by a royal charter in 1318 . The population was around 2000 people in the middle of the 14th century. A bubonic plague epidemic in 1349 killed almost half of the population. After the end of the English Wars of the Roses , the pretender to the throne Perkin Warbeck sought support in Cork in 1491 for his plans to overthrow King Henry VII . The mayor and several important citizens of the city went to England with Warbeck and were captured and executed after the collapse of the rebellion. Cork's nickname "Rebel City" has its origins in these events.

The Wars of Religion

In the second half of the 16th century, the House of Tudor succeeded in expanding English rule over the entire island. English settlers came to the country trying to enforce the Reformation in Catholic Ireland. Cork suffered particularly during the second " Desmond Rebellion " between 1579 and 1583. The rural population fled by the thousands from the fighting in the city, in which there was also an outbreak of epidemics.

When Spanish troops disembarked in nearby Kinsale in 1601 to support the Hugh O'Neill rebellion , much of the citizenry remained loyal to the English crown. They hoped in vain for greater freedom for the Catholic faith. In 1603 the Catholic residents rebelled. They seized the arsenal and drove out Protestant clergy and English officials. The then marching army under Lord Mountjoy had to surrender, however, and the leaders of the uprising were imprisoned.

In 1641, Ireland was rocked by a Catholic rebellion in which several thousand Protestant English settlers were killed by the insurgents. Cork was a stronghold of the Protestants at the time and became a haven for the settlers. It remained in English hands throughout the war against the Catholic Confederation. In 1644, the English city commandant Murrough O'Brien , Earl of Inchiquin, drove the Catholic residents out of the city. Although most of the displaced people settled in surrounding towns, the city of Cork remained Protestant-dominated for the next two centuries.

During the reconquest of Ireland by an English army under Oliver Cromwell from 1649 to 1653, Cork sided with the English Parliament, although Inchiquin had briefly allied itself with the Catholic Confederation in 1648. Under the influence of Roger Boyle, 1st Earl of Orrery , the garrison changed sides again in 1650. In the conflict over the English throne between James II and William of Orange , Cork was initially in the hands of Jacobite troops in 1689. In 1690 the town was besieged and finally conquered by a Protestant army under John Churchill, 1st Duke of Marlborough . The city wall was almost completely destroyed. 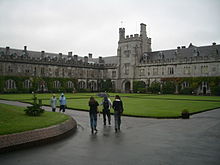 Cork in the 18th century

At the beginning of the 18th century, French Huguenots came to Cork fleeing religious persecution. Their influence is still evident today in street names, such as French Church Street . In the course of the century, almost the entire medieval structure was replaced by new buildings in neoclassical Georgian architecture. Examples are Christ Church (1720-26), the Church of St. Anne in the Shandon district (1722-26) and the Custom House (1724). At the end of the century, the city experienced an economic boom due to the rapidly expanding port and the emerging glass factories. In particular, the export of butter to Europe and North America gave Cork considerable prosperity by Irish standards.

The first half of the 19th century was marked by a rapid increase in population. Around 1850, around 80,000 people lived in the city. Most rural immigrants fled poverty and intermittent famine. The city could barely cope with this influx, so that many people had to live in catastrophic conditions. However, the increase in the predominantly Catholic population ensured that the Protestant influence in the city waned.

Cork and nearby Cobh have been Ireland's major emigration ports since 1825. After the great famine in the 1840s, the flow of emigrants swelled significantly. It is estimated that around 3 million people left the country via the port of Cork. During the 19th century, Cork's industry also experienced rapid growth. Above all breweries, distilleries and shipbuilding companies were founded. The connection to the railway network in 1849 also contributed to this development. The university also opened in the same year .

War of independence and civil war

Cork has been a stronghold of Irish nationalism since the 19th century. Between 1916 and 1922, the city was the scene of frequent conflicts between radical Irish nationalists and the British state. During the Easter Rising of 1916, around 1,000 Irish volunteers stood ready to revolt against British rule. But they dispersed without a fight.

On March 20, 1920, the city's Lord Mayor, Tomás MacCurtain , an ardent nationalist, was shot dead in his home by members of the Royal Irish Constabulary in civilian clothes. His successor, Terence MacSwiney , was arrested in August 1920 and taken to Brixton Prison in London . There he died after a 73-day hunger strike in October 1920. His funeral in Cork took place with great public sympathy. In response to repeated attacks by the IRA, British auxiliaries (also known as Black and Tans ) burned Cork city center on December 11, 1920. Over 300 buildings were destroyed.

Up until the armistice in July 1921 there was repeated fighting between the IRA and British security forces in the city. The majority of the IRA units in the city did not accept the Anglo-Irish treaty concluded in December 1921 . When the civil war broke out in July 1922 , the city was a stronghold of the opponents of the treaty. But already in August 1922 the city was taken by troops of the new Irish Free State . The poorly equipped contract opponents dispersed after a short fight. They burned down their accommodations and waged a guerrilla war in the vicinity of the city until 1923 . Then they announced a truce and surrendered their weapons.

The port of Cork, a natural harbor at the mouth of the River Lee , is partially outside the city. Passenger terminals are located in Ringaskiddy and Cobh , also outside the city limits. The large natural harbor is a ferry, cruise, container, industrial, fishing and military port. Until 1938 it was a British military port. Today it is the seat of the Irish Naval Service (the Irish Navy) and the Irish Fishery Monitoring Center of the Sea Fisheries Protection Authority (SFPA) as well as the Royal Cork Yacht Club , the oldest yacht club in the world, in Crosshaven . 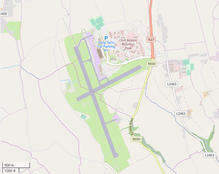 The Lord Mayor of Cork - the office has existed since 1900 - is elected annually in June by the City Council. Since 2015 it's Chris O'Leary from the Sinn Féin party.

The Cork City Council is elected for five years. The last election took place on May 23, 2014. Since then the seats have been distributed as follows:

The English Market in Cork

Cork had a significant textile industry in the 17th and 18th centuries . Even today, Cork is an important seaport ( Cork Harbor ), which lies at the end of the second largest natural harbor. The Republic of Ireland's second largest international airport is also close to the city . Several industrial areas can be found in the vicinity.

The butter ( Kerrygold ), traditionally produced in Ireland, also played a role in Cork's economic rise. In the 19th and 20th centuries, hundreds of tons of salted Irish branded butter were shipped from the port to all parts of the world, for example to Australia and the Caribbean. This part of the history of Ireland and Cork can now be admired in the Cork Butter Museum.

The two well-known breweries Murphy’s and Beamish & Crawford are also located in Cork.

The University College Cork , the Cork Institute of Technology and several IT companies (such as Apple , Logitech , EMC ) are located in Cork . The largest employer in the city is Apple with its European headquarters.

Cork was European Capital of Culture in 2005 . The city's regular cultural events have been the Cork Film Festival for short films for more than 50 years . The Cork Jazz Festival has been held annually at the end of October since 1978.