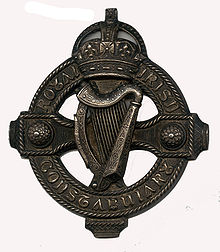 Bridle badge of the mounted RIC

The armed forces consisted primarily of Catholics , although their proportion decreased in the higher ranks.

The Royal Irish Constabulary was dissolved in 1922 and replaced by two new police groups: the Garda Síochána in the Irish Free State and the Royal Ulster Constabulary in Northern Ireland .

The first organized police force in Northern Ireland was created by the Peace Preservation Act in 1814; however, the Irish Constabulary Act of 1822 is believed to be the true origin of the Irish Constabulary, when four expanded "county" constabularies were created. One of the first tasks was the forcible collection of the tithe on behalf of the Anglican clergy from the mainly Catholic population, but also from the Presbyterian minority ( see also: Tithe War ). The act established a group in each barony with a police chief and an inspector general under the control of the state government at Dublin Castle . The force, now under the name Irish Constabulary (or: Constabulary of Ireland ), was reorganized and streamlined by law in 1836; the first police guidelines were published in 1837. In 1841 the RIC had more than 8,600 men, although the work was poorly paid.

The police demonstrated their effectiveness against the Irish separatists when they put down the William Smith O'Brien uprising. During the Fenier Uprising in 1867, many more remote police stations were attacked as the RIC was loyal to the British Crown. The loyalty during the uprising was recognized by Queen Victoria and so the Irish Constabulary received the addition "Royal" and the right to use the badge of the Order of St. Patrick .

The RIC have played a significant role in the decline in rural crime. Offenses such as the "illegal armed gathering" were outnumbered by "public drunkenness" and other petty offenses (except during the Land War 1879–1882).

Belfast , long beyond the control of the RIC, was often torn by sectarian tensions in the second half of the 19th century, when the population quintupled in 50 years. There were some riots in the years 1857, 1864, 1872 and 1886. The riots of 1864 led to the Belfast Town Police (Belfast city police; Nickname: bulkies ) was abolished and the responsibility for the city on September 1, 1865 also on the RIC passed over.

Due to its ubiquity in the 1850s, the RIC was entrusted with a variety of civil and local government tasks, which strengthened the police officers' ties to "their" communities. In 1901 there were already 1,600 police stations and more than 11,000 police officers. Involved in tens of thousands of evictions in rural Ireland and the threats it posed to leaders of the Land League organization, the RIC earned distrust among the Irish population, which was only diminished somewhat with the outbreak of World War I.

It was only with the advent of the Home Rule proposals towards the end of the 19th and beginning of the 20th century that the RIC's previously leisurely work was intensified. The initial success of the 3rd Home Rule in 1912 led to great tension: opponents of the draft founded the Ulster Volunteer Force in 1913 , while supporters created the Irish Volunteers in return . These two groups had over 250,000 members and were organized as effective private armies .

The victory of Sinn Féin in the 1918 election and their establishment of an independent parliament ( Dáil Éireann ) marked the beginning of a guerrilla war. The Irish Republican Army IRA under Michael Collins carried out systematic attacks on government forces, of which the RIC received the most serious. In parallel, there was a boycott of the police by the IRA, which created alternative courts and police forces. In 1920 the British government sent additional forces to Ireland to support the police forces in Ireland. These were the Black and Tans and the Auxiliary Division . Ireland was divided in December 1920 and an armistice was declared in July 1921. In January 1922 it was decided to dissolve the Royal Irish Constabulary in the newly created Irish Free State and replace it with the Garda Síochána . In Northern Ireland, the group was renamed Royal Ulster Constabulary (RUC).

Many men of the Royal Irish Constabulary moved north to the RUC. This resulted in an armed force in Northern Ireland that was 40% Catholics. This quota later fell to 8% when the resigned police officers were no longer replaced by Catholics from the north, as they mostly rejected the strict unionist sentiments of the RUC. Many of these departed men feared returning to the Free State as they were still associated with the brutality of the conflict that had produced the partition.

Some police officers of the dissolved RIC also joined the Garda Síochána and supported the IRA in various ways. Others resigned and the Free State agreed to pay their pensions. However, many of the RIC men living in the Free State saw themselves exposed to threats and violent acts of revenge during this time, so that some also fled to Great Britain, where they together with many former members of the Black and Tans and the Auxiliaries, the Palestine Gendarmerie (later: Palestine Police ) who were being recruited there at the same time.

In 1922 people were recruited in Dublin and London by the Colonial Ministry for the newly established British Gendarmerie in the Palestine Police . Most of the 700-strong new unit for Palestine were former members of the Royal Irish Constabulary.