The Ulster Volunteer Force (UVF) is a 1912 founded Protestant- unionist militia and a Founded in 1966, loyalist oriented terrorist organization in Northern Ireland , whose aim is to prevent the connection of Northern Ireland to the Republic of Ireland and the membership of the United Kingdom to obtain. Around 400 politically motivated murders between 1966 and 2003 are attributed to the UVF. 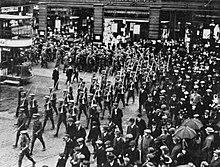 The first UVF was founded in 1912 by Edward Carson and James Craig as a unionist militia, which quickly comprised around 90,000 members. The organization received material support from former army officers. In the spring of 1914 a total of 20,000 rifles were bought in Hamburg and smuggled into Ireland via Larne and Bangor . The German authorities may have turned a blind eye, but did not support the action. In 1914, when the war broke out, many members volunteered for the army and trained there. a. the 36th (Ulster) Division , which was largely worn out in the Battle of the Somme in July 1916 . After 1921, many former UVF members joined the B-Specials and other military and paramilitary associations of the Northern Irish state.

A new UVF was founded in the mid-1960s; The first murders in 1966 in the run-up to the " Troubles " were committed by the UVF, which at the time was closely linked to the Ulster Protestant Volunteers initiated by Ian Paisley . In June 1966 the UVF was banned by the Northern Irish government; until 1971 the UVF worked closely with the paramilitary organization Tara .

A stronger influx of new members began from 1969 with the resurgence of the IRA . In the 1970s, the UVF, which has its strongholds in the Protestant working-class districts of Belfast , was responsible for some of the worst attacks in Northern Ireland, but also in the Republic, for example on a bar in Belfast in December 1971 (15 dead), in Dublin and Monaghan on May 17, 1974 (33 dead) and October 2, 1974 (12 dead). Nevertheless, the UVF was legalized from April to October 1974. At the same time a tendency developed among the captured UVF members around Gusty Spence to politicize the organization and to turn away from murders of Catholic civilians. Expression of this tendency was the founding of the Progressive Unionist Party (PUP) in 1979 , which is regarded as the political arm of the UVF and tries to embody a contradicting politics between paramilitary loyalism and progressive social policy. In 1996 radical sections of the UVF split off and were constituted as the Loyalist Volunteer Force (LVF).

The Good Friday Agreement of April 10, 1998 largely ended the fighting, but in 2005 the UVF began to use violence against the LVF and shot at least six alleged members of that organization.

On May 3, 2007, the leadership announced that they would finally renounce the use of force. This is linked to the fact that the UVF ceases to exist as a paramilitary organization. Nevertheless, they will not surrender their weapons, but will only make them inaccessible. It was not until June 2009 that the declaration was made that the entire arsenal had been made permanently unusable. This was monitored and verified by the independent Disarmament Commission headed by General John de Chastelain of Canada.

In January 2012, the Northern Irish police leadership alleged that the UVF, together with the UDA, was responsible for the escalation of violence in loyalist demonstrations against the decision of the Belfast City Council to no longer hoist the British flag on the town hall.