from Wikipedia, the free encyclopedia
This is the spotted version , flagged on June 14, 2020 . There is 1 pending change that has yet to be viewed. 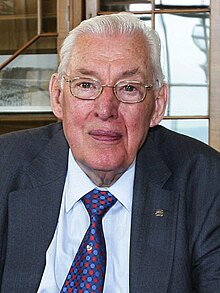 Ian Richard Kyle Paisley, Baron Bannside (born April 6, 1926 in Armagh , Northern Ireland - † September 12, 2014 in Belfast ) was a Presbyterian pastor and politician in Northern Ireland. From 2007 to 2008 he headed the Northern Irish regional government as First Minister .

According to the Economist , Paisley was "the only man in twentieth century Europe to found both a church and a party."

Paisley was the son of a Baptist pastor and a Scottish preacher. He attended South Wales evangelism school and was ordained a pastor in 1946 at the age of 20. In the early 1950s he founded the Free Presbyterian Church and became its chosen speaker (English moderator ). He also founded his own newspaper, Protestant Telegraph . Today (2014) the largest Protestant unionist party in Northern Ireland, the Democratic Unionist Party (English Democratic Unionist Party ; DUP), goes back to him; he was its chairman from 1971 to 2008.

In the 1960s he fought against rapprochement between Northern Ireland and the Republic of Ireland (talks between the Prime Minister of Northern Ireland Terence O'Neill and the Irish politician Seán Lemass ). He campaigned against equal rights for the Catholic-Irish Northern Irish. Since his youth he has opposed any cooperation with Catholics as a "pact with the devil". When the Northern Irish Parliament was dissolved in 1972 under British Prime Minister Edward Heath , Paisley opposed it. The Sunningdale Agreement (a tripartite agreement between the Republic of Ireland, the United Kingdom and Northern Ireland) also wanted to prevent Paisley. The plan was to create an Irish Council (English Council of Ireland ) that could have passed regulations for Ireland and Northern Ireland. The organizers of a major strike ( Ulster Worker's Strike ), in which the water and electricity supply were affected, appealed to him. The Sunningdale Agreement did not materialize.

Than for 1985 Anglo-Irish Treaty came (English Anglo-Irish Agreement ), he turned against it. Under the motto "Northern Ireland Says No!" (Ulster says No!) , Paisley organized large public rallies with his rival from the Ulster Unionist Party , James (Jim) Molyneaux. He later founded the paramilitary unit "Third Force" (English Third Force ), which, however, soon disbanded. Paisley saw the political danger in Ireland and the United Kingdom being able to act together over the heads of the Protestant population of Northern Ireland.

Paisley denied that there would ever be peaceful coexistence between Protestants and Catholics in Northern Ireland. When the British Prime Minister James Callaghan said soothingly to him one day: “We are all children of God!” Paisley replied: “No, Mr. Callaghan, we are children of wrath .” When Pope John Paul II In 1988 Paisley gave a speech in front of the European Parliament and suddenly stood up and shouted, "Antichrist, I denounce you and your false teaching!" ( Antichrist , I denounce you and your wrong teaching). At the same time he was holding a poster that read "POPE JOHN PAUL II ANTICHRIST" (Pope John Paul II Antichrist). After Paisley was expelled from the room, the Pope continued his speech.

Paisley was invited to the negotiations for the Good Friday Agreement in 1998, but his DUP withdrew immediately when Gerry Adams and his Sinn Féin appeared. When the result was put to the vote in both Northern Ireland and the Republic of Ireland, Paisley called on voters to vote no in the referendum . Nevertheless, a majority was in favor of the agreement.

Since 2005 Ian Paisley was a member of the British Privy Council .

It was assumed quite early on that he would most likely be elected First Minister of Northern Ireland in May 2007 . His unwillingness to talk to Sinn Féin for a long time blocked the formation of an all-party government. On May 8, 2007, Ian Paisley and Martin McGuinness of the Sinn Féin, the political wing of the Irish Republican Army (IRA), formed the Northern Irish all-party government as heads of government. In the cabinet, the DUP occupied five ministerial posts, the Sinn Fein sent four ministers, while the Unionist Party Ulster Unionist Party two and the Republican Social Democratic and Labor Party had to have a cabinet seat. Paisley and McGuinness were already in agreement at this point in urging the British Chancellor of the Exchequer to cut corporate tax to 12.5 percent in order to stimulate the economy like the Republic of Ireland. Even if Paisley was outwardly friendly towards his former opponent, the statements of Robin Newton, the parliamentary group leader of the DUP, spoke a different language: “It is the policy of the DUP to only maintain formal business relations with Sinn Féin in the various committees . "

On March 4, 2008, Paisley announced his resignation as Northern Ireland's first minister and as chairman of the DUP for the coming May. Paisley was last considered controversial within the DUP after his son Ian Paisley Jr. , who was widely regarded as Paisley's “right hand”, was embroiled in political scandals and had to give up his government office in mid-February 2008. Paisley stated, however, that his resignation was unrelated to this affair. From 2010 until his death he was a member of the House of Lords .

His marriage to Eileen Paisley had five children. He died on September 12, 2014 in Belfast at the age of 88 of complications from heart failure .

The failure of various attempts to improve the situation in Northern Ireland can be traced back to Paisley's blockade. His opponents saw Paisley as a hardliner , a blocker from the consciousness of being chosen.