The title of this article is ambiguous. Further meanings are listed under Armagh (disambiguation) . 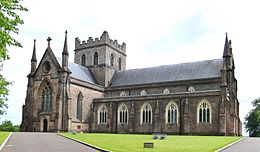 Armagh ( [ɑɹˈmɑː] ; Irish Ard Mhacha [ard ˈwaˑxə] , "height of the (goddess) Macha ") is a city in Northern Ireland with the status of a city and the seat of the historic county of Armagh . It was the administrative seat of the former District Armagh , which in 2015 became the District Armagh, Banbridge and Craigavon . Armagh is about 65 km (40 miles) southwest of Belfast .

According to legend, Armagh was founded in 444 by Saint Patrick . From a historical point of view, the fact that Armagh was firmly associated with him very early on from references in Patrick's writings is more tangible. The monastery of Armagh, which was probably founded around Patrick's time (possibly actually by himself), skillfully exploited this association in the following centuries for power politics, whereby the abbishops were probably helped by the fact that the Navan Fort ( Emain Macha ) was an old center of power of Northern Ireland was in close geographical proximity. Through the collection of relics and the establishment of consecration places for Patrick, a seemingly indissoluble connection was established between the herald of Christianity and the bishopric. Despite initial serious rivalries with other Irish monasteries, Armagh was the undisputed ecclesiastical power with significant secular influence as early as the early Middle Ages .

The collective manuscript Book of Armagh , which, in addition to Latin texts, also contains some of the oldest texts in the Irish language, was probably also created in the monastery of Armagh around 807 . The Latin texts include a. two vitae of Patrick and other writings about him. Im also in the Book of Armagh contained Liber Angueli Patrick (and thus, according to general interpretation, Armagh) granted Prima rights throughout Ireland by an angel. The Irish-language passages are the first surviving coherent texts in the Irish language. These are mainly commentaries on selected parts of the Bible .

Brian Boru , under whose leadership the last great battle against the Vikings was won in 1014, was buried in the cemetery of Saint Patrick's Cathedral (now owned by the Anglican Church of Ireland ) .

On June 12, 1889, the so-called Armagh rail disaster occurred near Armagh , a railway accident in which over 80 people, mostly school children, were killed.

The denominations are distributed in Armagh as follows: 71.2% of the population belong to the Roman Catholic Church , 25.5% are Protestants, mostly members of the Anglican Church of Ireland . 3.3% belong to another or no religious community .

In Armagh there is a branch of the Queen's University of Belfast as well as an observatory ( Armagh Observatory ) with a planetary path .

The HM Prison Armagh played in the Northern Ireland conflict a special role. It has been closed since 1986, the buildings erected from 1780 onwards have been a listed building since 1975.