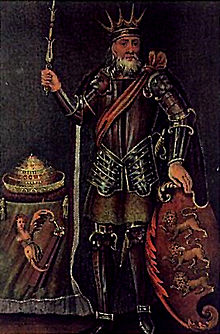 Brian Boru , also Brian Bóruma, Brian Bórama or Brian Bóroimhe, actually Brian Bóruma Mac Cennétig (* around 940 in Béal Bórú ; † April 23, 1014 ), was the son of the king of the clan of the Dál gCais (Dalcassians) and for a short time first and only Irish high king .

Brian mac Cennétig was born in Béal Bórú, near Killaloe on the Shannon River in what is now County Clare . His father was rí (" king ") of the then insignificant clan of the Dál gCais . In a joint battle with his older brother Mahon, who had ascended the father's throne, Brian Boru defeated the Vikings in the enclave of Limerick . This made Mahon Oberkönig von Munster and his seat in Cashel . However, the fighting against the Vikings, who also sat in Cork , Dublin , Waterford and Wexford , continued. Brian, whose inauguration traditionally took place in Magh Adhair near Quin , claimed the title of King of Munster after the death of his brother. The King of Eoghanacht was already sitting in Cashel, but Brian defeated him. As king of the province of Munster, he made the local princes pay taxes and used the money to rebuild the monasteries and libraries that had been destroyed by the Vikings.

On Good Friday of the year 1014 there was the costly Battle of Clontarf , which went down in the annals of Inisfallen as the expulsion of the Vikings (Danes) . In the battle, Brian Boru and his son Murrogh (Murchadh) fell, but Brian's troops won. The best-known legend of the battle says that the Irish bards played the same piece, the Brian Borus March , for three days and three nights at his grave .

Brian's body was taken to Swords Castle in County Fingal and later buried on the hill of Armagh Cathedral. After his death everything in Ireland remained as it was before his appearance, including the Vikings. Only the numerous descendants that Brian Boru had with his four wives and 30 concubines were called the O'Briens (the sons of Brian) from then on .