When Sven Gabelbart dies on February 3, shortly before his coronation in Gainsborough , which he has elevated to the capital , his sons plan to divide up the Anglo-Scandinavian Empire he had created . His eldest son Harald II also becomes King of Denmark . England, on the other hand, which has ruled Sven without resistance in the last few months after the expulsion of King thelred , does not recognize his second son Knut as his successor, and the Witan calls Æthelred back from his exile in Normandy. Knut has to retreat to Denmark for the time being, where he is gathering an invading force. 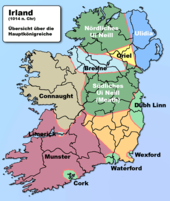 The army of the Irish High King Brian Boru defeated the Vikings from Dublin and the Isle of Man and their Irish allies at the Battle of Clontarf on April 23 . The defeat did not result in the “ expulsion of the Vikings from Ireland ”, as tradition reports, but their political power on the island has now been finally broken. However, Brian Boru, like his son Murchadh, falls in battle. The new Irish high king is Máel Sechnaill MacDomnaill , who was also involved in the battle .

The Taifa kingdom of Dénia

Byzantine Empire and its neighbors 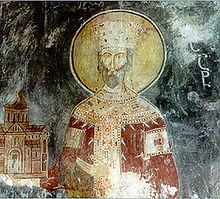