Stockerau is a town in the Korneuburg district in Lower Austria . With 16,875 inhabitants (as of January 1, 2020) it is the largest city in the Weinviertel .

The name Stockerau is said to be derived from the composition Stocker-Au: the Au of the woodcutters. The Stockerau Au - the river forest between the city and the Danube - is still an important recreational area for the Stockerau residents, even if the construction of the Danube power plant in Greifenstein has noticeably affected the landscape and the ecosystem . The area has been under nature protection since 1994.

Stockerau is also called "Lenaustadt" because the poet Nikolaus Lenau often spent time here with his grandparents in his youth.

Stockerau is the largest city in the Weinviertel and is located 25 km northwest of Vienna on the northern edge of the Tullner Basin , only a few kilometers from the Danube .

The municipality includes the following three localities (population as of January 1, 2020):

The community consists of the cadastral communities Oberzögersdorf, Stockerau and Unterzögersdorf.

Around 791, the woodcutters working in the Au were the first people to settle on the site of today's Stockerau. In 1012 Stockerau was first mentioned in a document as "Stoccaerouwe" in connection with the Holy Koloman . Koloman was an Irish wandering monk who was killed by the stickers because they did not understand his language and thought he was a spy. When the rotten tree on which he was hanged began to sprout again, but at the latest when his grave was miraculously spared in a flood, people were convinced that they were dealing with someone who was apparently in God's grace stood. The elder bush on which Koloman was supposedly hanged still grows today on the back wall of the monastery of the Steyler Missionary Sisters St. Koloman , the so-called "Klösterl".

In 1014 the parish Stockerau was founded . On April 5, 1465, Stockerau received from Emperor Friedrich III. granted the market right. 1514 was the market town of Maximilian I. emblem and seal as a sign of special imperial favor. The coat of arms shows on a red-white-red background a young tree growing out of a rotten tree stump, a reminder of the holy Koloman, but also of the "Stocker" as the founder of Stockerau.

In 1841 the third railway line in Austria from Vienna-Jedlesee to Stockerau was opened. The express trains to Vienna run on this line today . With the construction of the railway line, the local industry was able to develop strongly. A number of companies built their factories in the area, among other things for textiles, candles, soaps, perfumes, food, leather, chemicals and machines, etc. Jos. Stefsky , trimmings and lace goods factory and kuk court supplier . On August 29, 1893 Stockerau was raised to the status of town by Emperor Franz Joseph I.

In 1945, a Soviet military cemetery was set up in the Stockerau cemetery, which was reburied in three mass and 28 individual graves with Soviet military personnel until 1957.

1962 saw the opening of the rapid transit connection Vienna - Stockerau. In 1964 the Stockerau Festival began with Jean Anouilh's “Jeanne or the Lark”. 1966 was the opening of the recreation center. On January 1, 1975, Oberzögersdorf was incorporated. The Stockerauer Au was declared a nature reserve in 1994 . In 2006 Stockerau joined the regional development association 10 outside Vienna .

Name of the municipality

The population of Stockerau has increased almost continuously since the second half of the 19th century. There was only a marked decrease in the population between 1939 and 1951.

Since the penultimate census in 1991, the population has also increased by 6.2 percent, which was due to the positive balance of migration (+ 8.1%), while the birth balance was negative (−1.9%). In the years 2001 to 2011, too, the birth balance was negative at −478. However, the migration balance of +1,650 more than compensated for this. Stockerau is part of the so-called bacon belt in the Vienna area.

The municipal council has 37 members.

In October 2018, Mayor Helmut Laab (SPÖ) announced his resignation on November 30, 2018. Gabriele Frithum (SPÖ) was designated as her successor. After the ÖVP and FPÖ resigned from office, new elections were necessary. After less than two thirds of the municipal council mandates were filled, the Lower Austrian provincial government dissolved the municipal council in December 2018. March 24, 2019 was set as the election date. Until the election, an advisory board was appointed to carry out the business of the community board, consisting of all electoral parties previously represented in the city council. City councilor Othmar Holzer (SPÖ) took over the role of mayor on an interim basis. In the election on March 24, 2019, the ÖVP became the party with the largest number of votes for the first time since 1945. The ÖVP's top candidate was Andrea Völkl, who was elected mayor at the constituent meeting of the municipal council on April 29, 2019.

There are two museums in Stockerau: 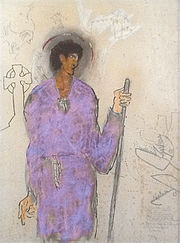 The picture of the pilgrim Koloman is in the parish, Kirchenplatz 3, 2000 Stockerau, Austria. A click on the picture opens the picture explanation.

The picture Wanderer between two worlds is located in the parish, Kirchenplatz 3, 2000 Stockerau, Austria. A click on the picture opens the picture explanation.

The picture The interrogation is in the parish, Kirchenplatz 3, 2000 Stockerau, Austria. A click on the picture opens the picture explanation.

The picture The torture is in the parish, Kirchenplatz 3, 2000 Stockerau, Austria. A click on the picture opens the picture explanation. 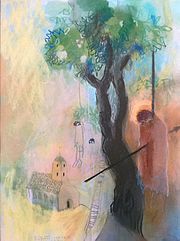 The picture The execution takes place in the parish, Kirchenplatz 3, 2000 Stockerau, Austria. A click on the picture opens the picture explanation.

The picture The Transfiguration is in the parish, Kirchenplatz 3, 2000 Stockerau, Austria. A click on the picture opens the picture explanation.

The picture of the state funeral is in the parish, Kirchenplatz 3, 2000 Stockerau, Austria. A click on the picture opens the picture explanation.

The following buildings by Stockerau are particularly noteworthy:

The Stockerauer Au has been a nature reserve since 1994 . It is one of the last large contiguous floodplains in Central Europe. The Stockerauer Au is watered by a so-called pouring channel. This pouring channel is an artificially created river, which was completed in connection with the construction of the Danube power plant in Greifenstein in 1984. The irrigation system has created many new aquatic habitats such as wet meadows and ponds.

In Stockerau there is a large recreation center with an outdoor pool, an indoor pool and an artificial ice rink. In addition, the nearby Au offers relaxation as well as other sports and leisure opportunities. There is also the Alte Au sports center in Stockerau, consisting of a football stadium, a sports hall and a multi-purpose hall (Millennium Hall, opened in 1999). The Alte Au stadium is the home of the SV Stockerau football club , which was the second division team in the early 1990s with the ÖFB Cup win against SK Rapid Wien , the participation in the Supercup final against FK Austria Wien and the narrow defeats in the European Cup of the cup winners against Tottenham Hotspur caused a sensation.

Stockerau also has an excellent handball team, the UHC Stockerau .

Particularly noteworthy is the performance center for judo and table tennis. The table tennis center is also the venue for training sessions for the Austrian national team. The Austrian top club UTTC Stockerau also plays here .

There is also a sports airfield about three kilometers north of Stockerau .

Stockerau is located directly on the A22 motorway and the Nordwestbahn and therefore has good transport links. The S-Bahn line S3 connects Stockerau with Vienna , Wiener Neustadt and Hollabrunn ; In addition, regional trains run to Vienna and Retz .

The FSV2000 , Flugsportverein Stockerau, also operates an airfield on the northern outskirts of the city that allows private planes to be approached.

The Greifenstein power plant in the Danube generates 1,717.3 GWh of electricity annually with a bottleneck capacity of 293 MW. The operator is VERBUND Hydro Power AG , a subsidiary of Verbund AG .

Jos. Stefsky trimmings and lace goods factory in Stockerau (around 1898)

The following international companies come from Stockerau or have their headquarters there:

Cities and municipalities in the Korneuburg district