Baroque group of tourists in town 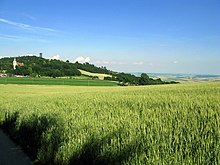 Ernstbrunn is a market town with 3264 inhabitants (as of January 1, 2020) in the Korneuburg district in Lower Austria .

Ernstbrunn is located in the center of the Weinviertel in Lower Austria at the foot of the Leiser Berge . The area of ​​the market town covers 80.72 square kilometers. 27 percent of the area is forested.

The municipality includes the following 12 localities (population in brackets as of January 1, 2020):

Already around 2000 BC There was a settlement in today's place around 500 BC. Chr. Settled Celts on Oberleiserberg . Finds of a Roman watchtower ( Danube Limes ) in Oberleis date from the year 100 AD .

In 1045 Ernustisprunnin was first mentioned in a document. Around 1533, the Roman-German King and later Emperor Ferdinand I granted the town of Ernstbrunn market rights after a local schoolmaster was first mentioned in 1531 . In 1592 the Lords of Sinzendorf acquired the rule, which they held until 1822. In 1432 the first report of the healing spring ("Heilbründel") (the Bründlkirche was built there in 1710, this was abandoned in the Josephine reforms in 1786). During the Thirty Years' War Ernstbrunn was occupied by Swedish troops in 1645. In 1713 the plague claimed 23 deaths, to commemorate them the plague column was erected on the main square the following year. In 1720 a great fire raged in the village. The first pharmacy in Ernstbrunn was built in 1793, and today's cemetery was inaugurated in 1798.

In 1828 the Reuss-Köstritz Princely House took over the Ernstbrunn Palace and Estate. During the German War in 1866, Prussian troops occupied Ernstbrunn, and the outbreak of cholera claimed 140 deaths. In 1883 the volunteer fire brigade and the lime union were founded. In 1887 the kk post office opened in Ernstbrunn with the postmaster Jakob Wojna after Ernstbrunn had been part of the postal service since 1839. Mayor Reidlinger put the fire fountain into operation in 1891, a Raiffeisenkasse opened in 1894 , and the Weislein steam mill was built in 1896.

With the opening of the Korneuburg – Ernstbrunn local railway in 1904, the stagecoach to Korneuburg was discontinued. Two years later, the regional railway line from Ernstbrunn to Mistelbach was opened. In 1908 the imperial jubilee school was inaugurated , and today's town hall became the mayor's seat. The municipality's own electricity generation was commissioned in 1911, and the war memorial was consecrated towards the end of the First World War in 1917 . The post office moved from the Hammerschmied house to the town hall a year later.

The telephone service was set up in 1920, and a year later a branch of the Korneuburger Sparkasse was opened. In 1923 the gymnast monument was erected on Semmelberg and in 1926 the football club was founded. A year later, the first public telephone was installed at the station. In 1929 Norbert Wutsch founded the Ernstbrunn – Laa / Thaya bus line . In 1934 a bomb attack was carried out on Mayor Seiler's house.

In the last days of the Second World War , Ernstbrunn became the scene of violent and eventful battles. For example, ten civilians and two Hungarian soldiers were killed in an air raid by the United States Air Force on January 31, 1945, three buildings were completely destroyed and 20 others partially destroyed. Between April 20 and May 8, 1945 there was fighting between troops of the Wehrmacht and the Red Army . The Vlasov troops were partially surrounded. Stubborn fighting took place outside the village in the Ernstbrunn Forest. In the course of the further fighting in Ernstbrunn, 9 civilians were killed , 5 houses were destroyed by artillery fire and around 100 were damaged.

A Red Cross Office was founded in 1953, and a year later a carnival parade was held in the community for the first time. The Janua Vitae holiday home opened in 1967. In 1970 Ernstbrunn was again defeated to the Korneuburg district . Three years later the first public payphone was set up in the community . In 1975 the wildlife park was opened. Four years later, the Kameradschaftsbund (Veterans Association from 1905) was re-established.

In 1983 the market town of Ernstbrunn celebrated its 450th anniversary, a parish partnership was established with Isen in Bavaria, the Heimatstube was opened and a traditional tree was erected. A Volksbank was opened in the community. The Ernstbrunn music band was founded in 1984. In 1988 the Korneuburg – Ernstbrunn – Mistelbach passenger train connection was discontinued. Two years later, the Ernstbrunn-Niederleis aid organization was founded. In 1995 the local history museum was opened and the 950th anniversary of the Ernstbrunn parish took place. In 1997 the traditional tree was completely renewed. The new fire brigade center was opened on September 6, 1998 and one year later, in 1999, the Klement Schüttkasten opened as a cultural center, the waste material collection center , the senior citizens' home and the “Leiser Berge” aid station. In 2000 the elementary and secondary schools were expanded and a new sports center opened. In 2003 the traditional tree was renewed again. A year later, the new cycle path “Keltentrail” and the new funeral hall were opened, followed in 2007 by the opening of the nostalgic adventure world ( bicycle trolley ) and the restored town hall.

The Kirchenweiler Oberleis with the pilgrimage and parish church hll. Mauritius and Maria

If you want to help, the instructions explain how to do it.
BW
See also : List of listed objects in Ernstbrunn  and List of cellar lanes in Ernstbrunn

Cities and municipalities in the Korneuburg district