This article deals with the district capital in Lower Austria. For further meanings see Hollabrunn (disambiguation) .

Hollabrunn is the capital of the political district Hollabrunn in the western Weinviertel in Lower Austria with 11,882 inhabitants (as of January 1, 2020). The name of the city ("Holerbrunen") is derived from Holler ( elder ) and fountain.

The town of Hollabrunn is located immediately west of the Ernstbrunn Forest in the Göllersbach valley in the Weinviertel in Lower Austria. The area of ​​the municipality covers 152.43 square kilometers. 32.07 percent of the area is forested.

The municipality includes the following 22 localities (population in brackets as of January 1, 2020):

The city and its surroundings have been settled since the Neolithic Age. The first written mention of Hollabrunn was in a deed of donation from 1135, in which Margrave Diepold III. von Vohburg made a donation of "seven landholders and three vineyards" to a Bavarian monastery. This document also mentions a Wilvolvis village near Hollabrunn. It is assumed that this is a settlement in the Hofmühle and Lothringerplatz area, which later merged with Hollabrunn (settlement in the Wiener Straße area).

From 1288 the place name Oberhollabrunn ( Hollabrunn superior ) was used to distinguish it from Niederhollabrunn . The rulership was then exercised by the Lords of Sonnberg , who founded the Hollabrunn parish around 1220 and granted the town market rights before 1377 . Because the Bohemian king Johann devastated Hollabrunn in 1336, the parish church had to be rebuilt.

When the Sonnberger in the 14th century, impoverished the gentry changed in the following years very often until mid- 16th century to the family of the Gilleis passed. From around 1530 the place was a post station on the Vienna– Prague route . In 1565, under Georg von Gilleis, Hollabrunn received the market coat of arms, which is still used today, and in 1574 the market privilege was renewed.

During the Reformation , the population became predominantly Lutheran . In 1662 the Dietrichsteiners took control of the place and promoted the Counter Reformation . A Capuchin monastery was built in 1667 , which Joseph II abolished in 1783. In 1683 the King of Poland Jan Sobieski and his troops traveled through Hollabrunn.

During the French Wars , the site was the scene of the battle of Hollabrunn and Schöngrabern in 1805 . Hollabrunn is therefore also mentioned on the inscription at the Arc de Triomphe de l'Étoile in Paris . Also in 1809 there was fighting between the Austrians and the French near the place.

A savings bank was founded on May 31, 1824, making it one of the oldest in Austria. After the revolution of 1848 , district administrative authorities were established, and a train station was built in Hollabrunn for the south-north German connecting line that opened in 1872 . In 1875 the place received a hospital.

In 1908 the market was elevated to the status of town because of "its regulated community system and its significant upswing" and in 1928 it was finally renamed from Oberhollabrunn to Hollabrunn.

The municipal council has 37 members. 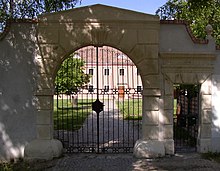 Gate to the old court mill

In 2001 there were 555 non-agricultural workplaces, and according to the 1999 survey there were 294 in agriculture and forestry. According to the 2001 census, the number of people in employment at home was 4868. A large proportion of the city's population commutes regularly to Vienna. The employment rate in 2001 was 47.14 percent.

The potato processor Frisch & Frost Nahrungsmittel GmbH is one of the largest companies in Hollabrunn . 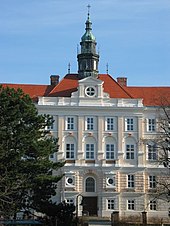 Today Hollabrunn is primarily a school town. The roots of this tradition were laid with the establishment of the grammar school in 1865 and the archbishop's seminary in 1881. There are also several university courses and technical college courses (in cooperation with the Hamburger Fern-Hochschule ).

Hollabrunn is on the Weinviertel expressway (S3) from Stockerau to the Czech border near Znaim ; As the European route 59 , this trunk road is one of the main connecting roads between Vienna and Prague .

Hollabrunn is connected via regional trains between Znojmo and Wien Meidling station and the S3 line of the Vienna S-Bahn directly to the Austrian capital and further south, towards Wiener Neustadt .

Well-known sports clubs from Hollabrunn are:

Cities and municipalities in the Hollabrunn district