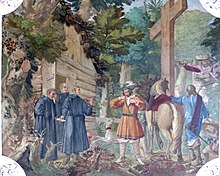 Diepold III. von Vohburg (* 1075 ; † April 8, 1146 ) from the house of the Rapotonen was Margrave of the Nordgau and of Nabburg , Vohburg and Cham . He was an influential follower of Heinrich V. In 1119 he founded the Benedictine monastery Reichenbach and in 1133 the Cistercian monastery Waldsassen .

Diepold III. was the eldest son of Diepold II von Vohburg , Margrave of the Nordgau and von Giengen , and Liutgard von Zähringen . After his father's death in the battle of Mellrichstadt, Luitgard took over the upbringing of the three-year-old Diepold. She stood on the side of the Pope in the investiture controversy and was committed to the Benedictines. Diepold III. is best known as the first father-in-law of the future emperor Friedrich Barbarossa . Diepold's daughter Adela , the heiress of the Egerland , married the young Staufer in Eger before March 2, 1147 , but divorced in Constance in March 1153 after six years of childlessness.

In 1093, when he came of age, he took over his father's inheritance and became Margrave of the Nordgau and von Giengen . In 1099 Diepold III took over. the rich inheritance of his two relatives Ulrich von Passau and Rapoto V. von Cham , but Rapotos V.'s dignity of Count Palatine was lost. Both died of an epidemic on a farm day in Regensburg at Easter 1099. The legacy included the rule of Vohburg and the brands Cham and Nabburg. The scattered possessions extended to Swabia and Austria.

Diepold III. stood on the side of Henry V in the fight against his father Henry IV. He was in Henry V's entourage on numerous trips and meetings, including in Quedlinburg and on the train to Italy in 1111 and 1116. In 1122 he was responsible for the Worms Concordat involved. He was at the accession to the throne of Lothar III. present and took the side of the Hohenstaufen when the conflict broke out against the Guelphs . This was followed by a reconciliation, which was sealed, among other things, with his second marriage and that of his son Diepold IV. In the entourage of Lothar, he met Pope Innocent II in Liège in 1131 and met Bernard of Clairvaux . Diepold III, who co-founded the Kastl monastery in 1103 , founded the Reichenbach monastery in 1119 and the Waldsassen monastery in 1133 . This foundation, which took place from Volkenroda , set the land development in the Egerland and the formation of the later Stiftland in motion.

His second marriage was with Kunigunde von Beichlingen from the Northeim family , a daughter of Count Kuno, widow of Wiprecht III. Count of Groitzsch . There were three other children from this marriage:

His third marriage was with Sophia, the sister of a Hungarian count named Stephan. There were two children from this marriage: