The title of this article is ambiguous. Further meanings are listed under Admont (disambiguation) .

Admont is an Austrian market town in the north of Upper Styria , about 20 km east of the district capital Liezen ( judicial district Liezen ).

In the south lies the Kaiserau high valley with its ski lifts in the Admont municipality.

With a municipality area of ​​299.84 km², Admont has been the second largest municipality in Styria after Mariazell and the fourth largest in Austria since 2015 .

The municipality comprises seven localities (residents in brackets as of January 1, 2020):

Two of the ten neighboring communities are in the Leoben district (LN), one in the Upper Austrian district of Kirchdorf an der Krems (KI).

Admont is one of the oldest settlements in Styria. The first mention is from the year 859 as Ademundi vallis . The name goes back to the ancient Slavic odmot (deep place in a river, whirlpool). Admont Abbey was founded in 1074 . In 1292 Admont and his monastery were conquered and plundered by the rebels of the Landsberger Bund , but were compensated by Duke Albrecht I after this uprising was overcome .

On April 27, 1865, a major fire destroyed 22 houses in the market and claimed seven lives. The baroque Admont Abbey was also affected, of which only the library remained. The monastery was rebuilt on the foundation walls in the following years - today's cathedral is the first large neo-Gothic sacred building in Austria.

During the Second World War , the Association 802 of the special unit 800 "Brandenburg" was stationed in the village.

After the end of the Second World War, Admont belonged to the British zone of occupation in occupied post-war Austria . The British military administration set up a DP camp for up to 2,000 Jewish “ displaced persons ” on the site of a former military camp .

Since October 26, 2003, Admont has been one of the national park communities of the Gesäuse National Park . 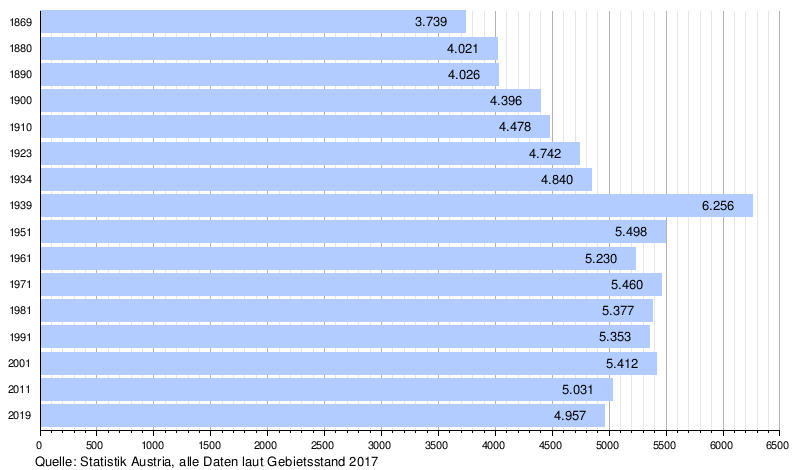 Three of the four merged municipalities had their own coats of arms by the end of 2014. Due to the amalgamation of municipalities, these lost their official validity on January 1st, 2015. The new municipal coat of arms was awarded by the Styrian state government with effect from June 15, 2017. The blazon reads:

"In the shield split by silver and red, two faceted diamonds are mixed up in color."

The coat of arms is a shield split vertically in silver and red with two diamonds at the point in red and silver (white). The origin of the coat of arms is not completely clear. Presumably the diamonds symbolize two boats that were touching the salt industry. The colors red and white stand for the ruling colors of the Counts of Helfenstein, who lived near Ulm and from whom the founder of the monastery, Archbishop Gebhard, descended.

Town hall of the municipality

The municipal council has had 21 members since 2015. 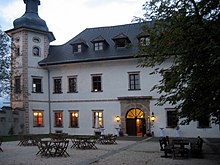 Parish Church of Hall near Admont 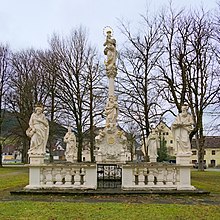 The Marian column in the Marienpark in Admont
See also:  List of listed objects in Admont

The main economic factor in Admont is tourism, with uses both in summer and in winter. The most important factor is the Admont Abbey with the largest monastery library in the world and its museum, which was newly opened in 2003. As a community in the Gesäuse National Park , which was founded in 2002, it sees itself as an attractive tourist destination.

Cities and municipalities in the Liezen district