Albrecht ,  V. Count of Habsburg (* July 1255 in Rheinfelden , † May 1, 1308 in Königsfelden bei Brugg ), was Duke Albrecht I of Austria , Styria and Carniola from 1282 and Lord of the Windischen Mark and from 1298 Roman German king from the House of Habsburg . The Habsburg land register was started on his orders .

King Albrecht sends a messenger to Pope Boniface because of his coronation as emperor (not contemporary illustration, around 1450). 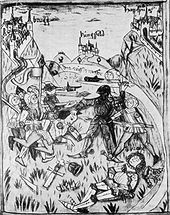 The murder of Albrecht in Königsfelden in 1308

Statue in the Army History Museum

The excerpt from the anonymous chronicle of the 95 dominions , which was written between 1349 and 1394, shows either King Rudolf I of Habsburg or King Albrecht I of Habsburg. Innsbruck, University and Regional Library Tyrol, Cod. 255, fol. 65v.

Albrecht I was the first legitimate son of the Roman-German King Rudolf I of Habsburg from his first marriage to Gertrud Anna von Hohenberg († 1281); his older half-brother Albrecht von Schenkenberg , who received the Grafschaft Löwenstein from his father , was born out of wedlock. His motto were “Fugam victoria nescit” (German: “Victory knows no flight”) and “Quod optimum idem jucundissimum” (German: “The best is the most pleasant”).

From 1273 he officiated as Landgrave in the Landgraviate of Upper Alsace . After the 1278 victory in the battle of Marchfeld over King Ottokar Přemysl of Bohemia , he was appointed by his father in May 1281, when he left conquered Vienna again, as imperial administrator over the imperial fiefs of the Duchy of Austria and the Duchy of Styria . The office had been vacant in the turmoil of the Austrian Interregnum since June 1278 because the Wittelsbach Heinrich XIII. had defected from Bavaria to the enemy.

On December 17, 1282, at the Reichstag of Augsburg , he was appointed Duke of Austria and Styria together with his brother Rudolf and only one year later on June 1, 1283 in the Rheinfelden house rules alone in these rights. Rudolf was to be compensated for this with other territories in southwest Germany, but this did not happen until his death in 1290. Albrecht quickly made himself unpopular with his policy of pushing back the local sexes through his Swabian clientele, especially the Lords of Walsee . In 1291/92 the Landsberg League revolted in Styria , against which Albrecht was able to quickly assert himself; In 1295 the Austrian nobility rose up. In Vienna, too, Ottokar Přemysl remained much more popular for a long time - not least because of economic relations with the Bohemian region. After all, Vienna got a new city charter in 1296 - the first one to be written in German .

Rudolf I tried to make Albrecht co-king during his own lifetime in order to make the royal dignity in the House of Habsburg hereditary. The electors , especially the Count Palatine and the clerical electors, did not allow this. In 1290 Rudolf wanted to put his son on the throne of Hungary, which after the assassination of Ladislaus IV was regarded as a reverted fiefdom , but his death in 1291 thwarted this plan.

As Rudolf's successor, Adolf von Nassau was elected the new Roman-German king in 1292 . In the following years Albrecht hardly intervened in imperial politics, as he was bound by revolts by various nobles in his Austrian lands. In 1295 he suffered serious poisoning, the reason for which remained unclear. Maybe the kitchen had processed slightly rotten food, or an assassin had mixed poison in the food. In any case, Albrecht collapsed from convulsions. His doctors gave him laxatives. After the colic got worse, he lost consciousness and, faced with the fear of death, was hung upside down by both legs so that the poison could flow out of his body. The patient survived this procedure, but one eye was destroyed.

When Adolf was deposed again in 1298, Albrecht was elected as his successor as German king on June 23, 1298. In the Knight's Battle of Göllheim (Battle of the Hasenbühel) on July 2, 1298, Adolf fell fighting the Habsburgs. On July 27, Albrecht was elected a second time and then crowned king on August 24, 1298 in Aachen . On his first court day in Nuremberg in the same year he enfeoffed his sons Rudolf , Friedrich the Beautiful and Leopold the Glorious with Austria and Styria.

Through a marriage connection with France, Albrecht I achieved peace with Philip IV the Fair , with whom he had previously been in dispute over the course of the border. Albrecht also reached an agreement with Wenceslaus II (Václav) of Bohemia in the dispute over rule over Poland : The Bohemian king added the most important parts of the recently re-established kingdom to a new collapse into his territory, but recognized Albrecht's fiefdom on. Opponents of-flung Habsburg power, however, remained the Rhenish electors and first Pope Boniface VIII. The papal approbation he received only 1,303 against far-reaching concessions, which the king's power, especially in Italy delicate restricted and as allegiance to the papacy could be understood. However, Albrecht refused the coronation offered by Boniface. Its chancellor was Johann von Strasbourg , Prince-Bishop of Eichstätt and Strasbourg.

In 1304 Albrecht and his son Rudolf moved together against Wenceslaus II, who after the death of Andreas III. (András the Venetian) his son Wenceslaus III. made the Hungarian king. But since the Pope would have liked to see another Italian on the Hungarian throne in the form of the Neapolitan Prince Karl Robert , he asked Albrecht for help. Albrecht made the strangest demands on Wenzel. When this did not fulfill them, the imperial ban was imposed on him . Wenzel then transferred the Hungarian crown jewels from Ofen to Prague . On the following campaign Albrecht and Rudolf besieged Kuttenberg (Kutná Hora, the silver mine of Bohemia); their Cuman auxiliaries committed terrible atrocities in the country. At the beginning of winter, hunger broke out in their army and they withdrew.

A political unification of Central Europe under the leadership of the Habsburgs seemed within reach. Albrecht succeeded after the death of the childless King Wenzel III. (August 4, 1306), who himself became king in Bohemia after the death of his father in 1305, installed his son Rudolf as King of Bohemia. Thereupon, however, the Bohemian estates rebelled and decided to depose the king. Albrecht quickly forced them to be recognized.

However, 1307 brought a serious setback for the Habsburg hegemonic plans. After Rudolf's early death, Heinrich von Carinthia from Meinhardinger became the new King of Bohemia. In connection with a controversial reverted fiefdom in Thuringia and Meißen, Albrecht also lost the battle of Lucka against the sons of Albrecht the Degenerate from the House of Wettin . When King Albrecht invaded the Easter country with a large army , the Margraves Dietrich IV of Lausitz and Friedrich I of Meissen , who were at the head of armed citizens and farmers as well as Braunschweig cavalry , brought him a complete one on May 31, 1307 Defeat at.

In the dispute over the customs posts of German princes, Albrecht soon took tough action until the archbishops and Rudolf , the Count Palatine near the Rhine , capitulated. However, Pope Boniface stood in the way of breaking up the Kurkollegium. The unrest in Swabia, Baden, Alsace and Switzerland also increased again during this period. Several country pacities announced by Albrecht remained ineffective.

Albrecht was murdered in 1308 near Windisch , now in Switzerland , not far from his ancestral castle. The murderers were his nephew Johann von Schwaben , who was nicknamed Parricida (relative murderer ) because of his act , the barons Rudolf von Wart , Rudolf von Balm , Walter von Eschenbach and Konrad von Tegerfelden . The exact course of the murder is presented differently by the chroniclers. Albrecht was probably on the way from Baden to his wife in Rheinfelden. In the morning, Duke Johann had - as he has often done - claimed his inheritance at Stein Castle , which led to a scandal. According to the chronicler Matthias von Neuenburg , the first stroke of the sword that pierced Albrecht's neck came from his nephew Johann, then Rudolf von Wart pierced him with the sword, while Rudolf von Balm split the king's skull in two. Johann was the son of Albrecht's brother Rudolf II , who died prematurely , who had renounced the regency in Austria in the Treaty of Rheinfelden and had become Duke of Swabia, Alsace and Aargau. According to chronic reports, the failure to pay Johann in compensation was the main motive. Depending on the sources, Johann's blood lust is also given as the motive for murder.

Successor as Duke was Albrecht's son Friedrich the Fair , but he did not succeed as King. The royal dignity went with Henry VII to the House of Luxembourg , where it remained until 1437 - interrupted by the governments of Ludwig of Bavaria and Ruprecht of the Palatinate .

King Albrecht was first buried in the Wettingen monastery (in today's Switzerland). In 1309, at the instigation of Henry VII, his body was transferred to Speyer, where he was buried side by side with his former rival Adolf von Nassau in the Speyer Cathedral .

The following children emerged from his marriage to Countess Elisabeth von Görz and Tirol in Vienna in 1274 :

Through the imperial resolution of Franz Joseph I on February 28, 1863, Albrecht I was added to the list of the “most famous warlords and generals of Austria worthy of perpetual emulation”, in whose honor and memory there was also a life-size statue in the general hall of the time The newly established Imperial and Royal Court Weapons Museum (today: Heeresgeschichtliches Museum Wien ) was built. The statue was created in 1867 by the sculptor Johann Pertscher (1837–1872) from Carrara marble and was dedicated by Emperor Franz Joseph himself. The Albrechtsbrunnen in Kaiserslautern was built in 1890.

Commons : Albrecht I.  - Collection of images, videos and audio files