Coat of arms of the old town Koenigsberg

The Flemish Franciscan and explorer Wilhelm von Rubruk leaves the capital Karakoram in spring after spending two years in Mongolia and starts his journey home. After a short detour via Cyprus, he arrives in Tripoli near Beirut on August 15th . There, his superiors did not let him travel to his clients in Rome or France, but entrusted him with the task of a theology lecturer in Acre . Here he dictates his travel report Itinerarium Willelmi de Rubruc in the form of a letter to the French king and has one of his companions deliver it to him. 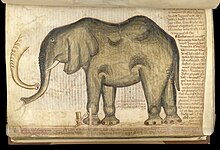 The elephant of Louis IX ; From the Liber additamentorum by Matthew Paris , 1255

The Shrine of Little Hugh in Lincoln Cathedral