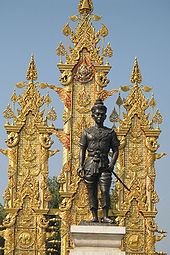 Mangrai becomes ruler of the Thai empire Ngoen Yang after the death of his father and begins an expansion policy against the neighboring small empires .

The Danish King Christoph I , who is in battle with Prince Jaromar II of Rügen and with the aspirant to the throne Erik Abelsen , wants his son Erik to be crowned his successor. However, Jakob Erlandsen , Archbishop of Lund , refuses to do so , who at the same time forbids all bishops in the country to perform the coronation. Christoph had him arrested on February 6th and humiliated publicly, whereupon the Roskilder Bishop Peder Bang pronounced the interdict against the king. He has the churches in Skåne and Sjælland closed and everyone involved in the archbishop's arrest is banned. The king then has the churches opened by force. Peder Bang then flees to Rügen . From there he returns in April with Prince Jaromar and Erik Abelsen and rages cruelly in Sjælland . The king has to retreat to Jylland and Jaromar II takes Copenhagen in May , with much of the city burned down after looting.

On May 29, Christoph I dies surprisingly in Ribe, which feeds rumors about his murder. King's widow Margarete Sambiria , who tries to maintain stability, releases Archbishop Erlandsen and enfeoffs Erik Abelsen with Schleswig . They mobilized a Zeeland peasant army against Jaromar, but they were defeated by Jaromar's troops on June 14 at Næstved . After the devastation of Zealand , Skåne and Lolland , he landed with his troops on Bornholm and destroyed the royal fortress of Lilleborg there . Nevertheless, Erik V is crowned King of Denmark at Christmas.

The cities of Lübeck , Stralsund , Wismar , Kiel and Rostock found the Wendish Association of Cities . It serves to secure the trade routes on land and at sea and is considered to be the nucleus of both the later Wendish quarter and the German Hanseatic League as a whole. 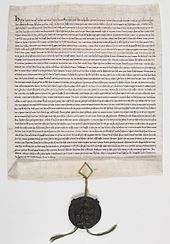 Self-portrait of Matthew Paris from his chronicle