Depiction of the Battle of the Terek River

Founding of cities and first mentions in documents 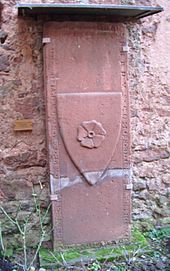 Gravestone of Eberhard IV, in the monastery Rosenthal , Palatinate

The grave of Gobert d'Apremont in Villers Abbey