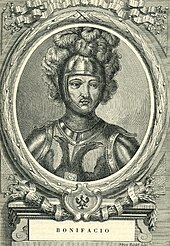 Boniface of Savoy,
engraving around 1700

Boniface was only nine years old when his father died in 1253. Until 1259 he was therefore under the reign of his uncle Thomas von Piémont .

Although his enthusiasm earned him the nickname Roland, his involvement in the wars in Flanders and Piedmont was a disaster.

He remained unmarried until his death and had no children. In 1263 he transferred the county of Savoy to his uncle Peter II.