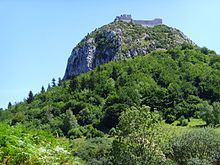 Crusades in the Holy Land

The death of Gruffydd ap Llywelyn in a 13th century depiction

The Welsh princes allied themselves to the rule of the English King Henry III , which had existed since the campaign of 1241 . to shake off. Only Gruffydd Maelor ap Madog of Powys Fadog , Gruffydd ap Gwenwynwyn of Powys Wenwynwyn and Morgan ap Hywel of Caerleon do not join the alliance. When Gruffydd ap Llywelyn , the older brother of Prince Dafydd ap Llywelyn of Gwynedd , who was held in the Tower of London as pledge of the king , had a fatal accident on March 1 while attempting to escape, Dafydd took over the leadership of the Welsh again. In a general uprising , large areas can be liberated from English rule in the spring. The Welsh siege Dyserth Castle and other royal castles. The King, initially bound by a conflict with Scotland, initially left the defense of the Welsh Marches to the Marcher Lords Richard de Clare, 5th Earl of Gloucester and Humphrey de Bohun, 2nd Earl of Hereford . Finally he has Owain Goch , the eldest son of the unfortunate Gruffydd ap Llylweyn, brought to Wales in the vain hope that the latter could attract supporters of Prince Dafydd to the side of the English king. 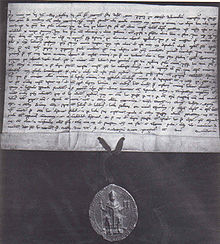 The city privilege of Siegfried III. von Eppstein for the Free City of Mainz from 1244