Gwynedd in the time of Merfyn Frych around 830

The Kingdom of Gwynedd was a medieval kingdom in Wales .

The Kingdom of Gwynedd was in the north-west of Wales. It bordered the Irish Sea to the north and west , the River Conwy on the east and the Dovey on the south. The island of Anglesey in the northwest of Gwynedd also belonged to Gwynedd and was divided into the three Cantrefi Rhosyr, Cemais and Aberffraw. The Lleyn Peninsula formed the west of Gwynedd, and Arfon , Dunoding and Arlechwydd formed the core of Gwynedd . To the southeast, Penllyn and Edeirnion were disputed between Powys and Gwynedd, while to the south-west Meirionnydd, Cyfeiliog and Arwystli and Ceredigion between Powys, Deheubarth and Gwynedd were disputed. The area east of Gwynedd between River Conwy and River Dee was under Gwynedd's influence and was known by numerous names at different times: Gwynedd Is Conwy ; The four Cantrefi (Rhos, Rhufoniog, Dyffryn Clwyd, Tegeingl ) or Perfeddwlad .

The lowlands on the coast could only be reached via the estuaries of the Clwyd and Conwy in the east, which are dangerous for shipping, or via the Dyfi, Mawddach or Traeth Mawr in the south. On the land side, Gwynedd was surrounded to the east and south by three concentric mountain ranges, the outer was the semicircular mountain range from Cader Idris to the Berwyn Mountains and the Clwydian Range, the closest inward was the Migneint Range to the south and the moors of Hiraethog to the east, and in the center was Snowdonia, the highest mountain range. This remoteness made Gwynedd easy to defend, while at the same time it was the least populated of the Welsh principalities and probably the least economically developed. Even if Gwynedd was a poor empire, it could still be self-sufficient. The island of Anglesey was considered the granary of all of Wales, while the hill country provided grazing grounds for large herds of cattle.

Gwynedd was one of four Welsh kingdoms that emerged after the Roman retreat from Wales in the 5th century. During the early Middle Ages, as under Cadwallon ap Cadfan, it was often involved in battles with the Anglo-Saxon empires in the east. In 825 Merfyn Frych became king of Gwynedd, his descendants, the House of Gwynedd , remained ruler of Gwynedd with interruptions until 1283. Merfyn's son Rhodri the Great managed to unite much of Wales under his rule around the middle of the 9th century. However, he was defeated and killed in 878, and the empire fell apart again under his sons. In the 11th century Llywelyn ap Seisyll von Powys also succeeded in gaining control of Gwynedd. His son Gruffydd ap Llywelyn managed to rise to the rank of king of all Welsh principalities.

Successful resistance to the Norman conquest

After Gruffydd's death in 1063, his empire fell apart, and the rival heirs to the throne waged long wars over his successor in Gwynedd. In 1081 Gruffydd ap Cynan was able to prevail against his rivals at the Battle of Mynydd Carn , but shortly afterwards he was captured by the Norman. During the power vacuum that followed, the Normans under Hugh d'Avranches and Robert of Rhuddlan managed to conquer large parts of North Wales . It was not until the end of the 11th century that Gruffydd ap Cynan regained its freedom. He was able to regain control of Gwynedd, but eventually had to submit to King Henry I of England . His son and successor Owain Gwynedd succeeded in becoming the most powerful of the Welsh princes during the Welsh uprising after the death of King Henry I. The English King Henry II tried in several campaigns from 1157 to restore English supremacy over Gwynedd, but ultimately failed. After the death of Owain Gwynedd in 1170, bitter wars of succession broke out between his sons, through which Gwynedd was again divided into several parts. 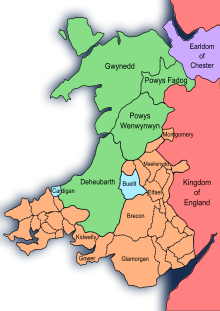 Gwynedd and the areas dependent on Llywelyn from Iorwerth around 1234

Only Owain Gwynedd's grandson Llywelyn from Iorwerth succeeded in reuniting the individual sub-kingdoms at the beginning of the 13th century. Llywelyn was able to maintain its independence from Iorwerth in checkered battles against the English king Johann Ohneland . In the Aberdyfi Agreement in 1216 he gained supremacy over the divided principalities of Deheubarth, in the same year he occupied the adjacent principality of Powys Wenwynwyn , which his family owned until his death in 1240. With the title of Lord of Aberffraw and Lord of Snowdon , Llywelyn underscored his supremacy over the other Welsh princes. Although he had tried to transfer his supremacy in Wales to his son Dafydd ap Llywelyn , the latter eventually had to take over from King Henry III of England . recognize. During a renewed war with England Dafydd died in 1246, and his nephews and successors Gruffydd ap Llywelyn and Owain Goch suffered considerable losses in the Treaty of Woodstock in 1247 and bowed to English supremacy. In 1255, however, Gruffydd ap Llywelyn gained sole control of Gwynedd, and in several campaigns he regained control of almost all Welsh principalities. Henry III, weakened by the rebellion of the barons under Simon de Montfort . Llywelyn finally had to grant the title of Prince of Wales in the Treaty of Montgomery in 1267 .

Gwynedd after the Treaty of Aberconwy in 1277

Conquest by Edward I.

With this, however, Llywelyn also recognized the supremacy of the English king, and when Llywelyn fell out with Heinrich's son and successor Edward I over fidelity, Edward I subjugated Gwynedd in a campaign in 1277 . In the Treaty of Aberconwy Llywelyn lost again the supremacy of most of the Welsh princes, but was allowed to continue to use the title Prince of Wales . When there was a Welsh uprising against English rule in 1282, Llywelyn supported the rebellion. Edward I then led a second campaign to conquer Gwynedd . Llywelyn finally fell in a battle in late 1282. His brother Dafydd continued the resistance until mid-1283, but could not prevent the English from conquering all of Wales. Edward I secured the conquests by building an iron ring of castles , which mainly enclosed Gwynedd. In the statute of Rhuddlan Gwynedd was finally in 1284 in the English principality of Wales .

County or principal area since 1974