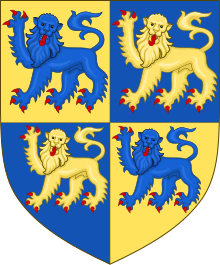 Dafydd ap Gruffydd or David ap Gruffydd (* 1235 ; † 1283 ) was Prince of Wales from 1282 to 1283 . Following his brother Llywelyn ap Gruffydd , killed in the war against England , he was the last Welsh ruler to ascend the throne of Wales . However, Llywelyn is commonly regarded as the last Prince of Wales (hence his nickname Ein Llyw Olaf - or English the Last , literally: "our last leader"), since Dafydd could no longer exercise his rule.

Dafydd was Prince of Gwynedd , the third son of Gruffydd ap Llywelyn Fawr and his wife Senena and thus grandson of Llywelyn the Great . He was ambitious and fickle in his loyalty. During his ascent he vacillated again and again between an alliance with his older brother Llywelyn and the support of the respective King of England . After Llywelyn's defeat by Edward I of England in 1277 , he first married Elisabeth de Ferrers, who was related to the king, daughter of William de Ferrers, 5th Earl of Derby , but was soon dissatisfied and finally began another uprising in March 1282 against English supremacy by attacking English Hawarden Castle . This attack created conflict with England and sealed the fate of the freedom of Wales. Llywelyn supported his brother and soon took the lead of the movement, but was killed in the Battle of Orewin Bridge . As the last prince of Gwynedd and Wales and ruling only a few months after his brother's death, Dafydd was captured and hanged, gutted and quartered while he sought refuge from the English in the mountains of Gwynedd . In all likelihood this happened in the city of Shrewsbury . The judgment passed on him, it is believed, was the first to which the predicate “ high treason ” was attached.

Dafydd's daughter Gwladys, like Llywelyn's daughter Princess Gwenllian , was sent to an English monastery (Gwenllian to Sempringham , Gwladys to Sixhills ), where she died in 1336. His two sons were imprisoned at Bristol Castle for the rest of their lives (1325 and 1328 respectively) .