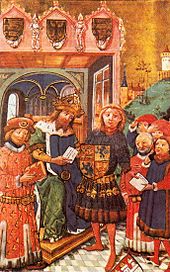 Friedrich II enfeoffs Otto the child with the Duchy of Braunschweig-Lüneburg at the Mainzer Hoftag; Book illumination in a Sachsenspiegel manuscript from 1448

In his book De Anni Ratione (loosely translated as "The Year System") Johannes de Sacrobosco criticizes the Julian calendar and suggests an improved leap year rule, as it was 350 years later by Pope Gregory XIII. will be realized in the Gregorian calendar reform .