The nineties of the twelfth century belong to the period of the High Middle Ages in Europe . European art is shaped by the transition from Romanesque to Gothic , which began in France and has already established itself there. Court poetry developed in European literature, also starting from France .

The beginning of the decade is marked by the Third Crusade (1189–1192). The setting is the Holy Land , large parts of the Arab world and Europe, the papacy and indirectly Byzantium are involved .

The decade is dominated by a violent conflict between the Empire and the Papacy . After the death of Pope Clement III. (March 25, 1191) becomes Celestine III. 85 years old on March 30, 1191, his successor. Henry VI. forces Celestine III to crown him emperor on April 14, 1191. 1193 excommunicated Celestine III. Leopold V of Austria for the capture of Richard the Lionheart .

Innocent III. becomes successor of Coelestin III. († January 8, 1198) and calls for the fourth crusade . After the death of Henry VI. (28 September 1197) begins Innocent III., A vigorous policy to strengthen the papal power position and the expansion of the Papal States to operate and attracts Reich in central Italy a ( Recovery ). In the German throne dispute , the Pope claims the decision on the double election of Otto IV and Philip of Swabia .

In the 1190s, Leopold V was first Duke of Austria. During his reign, Richard the Lionheart was captured in Erdberg near Vienna on December 21, 1192. On March 28, 1193, Richard was given to Emperor Heinrich VI. delivered and transferred to Trifels Castle . Leopold was still in office until 1194. His successor was Friedrich I , followed by Leopold VI in 1198 . followed.

Imperial Italy is all about the conflict between the Pope and the Roman-German Emperor .

Richard the Lionheart was captured by Leopold of Austria on his way back from the Third Crusade in Vienna at the end of 1192 and passed on to Emperor Heinrich VI in 1193. delivered. After his release in 1194, he performed Heinrich VI. the fiefdom . The Anglo-French War also broke out in 1194 and lasted until 1199. Richard the Lionheart dies on April 6th, 1199. His successor is his brother Johann Ohneland .

Cyprus had been a separate empire under Isaak Komnenos since 1184 . After the conquest by the Crusaders, the island becomes part of the occidental world with a coexistence of Byzantine and Frankish cultures.

The Iberian Peninsula is characterized by the conflict between the Arab Almohads and Christians who are successful in expansion ( Reconquista ). 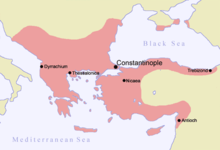 Starting from the old French literature, courtly poetry became established in Europe in the 1180s . The heyday of the so-called Middle High German Classic developed in Germany . Most literary works cannot be precisely dated.

Chrétien de Troyes , who is considered the founder of the courtly verse novel , died in France around 1190 . After 1191, Béroul completed the Tristan .

In Germany wrote Hartmann von Aue to Erec , Gregorius , the poor Heinrich and Iwein . Exact dates beyond the relative chronology of his works are not possible, but Hartmann's work falls between 1180 and 1205. Heinrich von Veldeke died between 1190 and 1200 , who, together with Hartmann, is considered to be the founder of the courtly novel in Germany.

The minstrel Friedrich von Hausen died on the third crusade at Philomelium in Asia Minor . Reinmar the Old was in the service of Leopold V of Austria in Vienna around 1190 . Walther von der Vogelweide composed mini poetry and poetry at the court of Frederick I of Austria until 1198 , then at various courts. Around 1200 Heinrich von Morungen , Bligger von Steinach , Heinrich von Rugge and Albrecht von Johansdorf composed courtly poetry.

The Christian Reconquista puts the Arab Almohads on the defensive.