The title of this article is ambiguous. Further meanings are listed under Tusculum (disambiguation) .

The theater of Tusculum in front of the Alban Hills (by Thomas Worthington Whittredge , 1860)

Tusculum was a city in Latium in antiquity and the Middle Ages , southeast of Rome in the Alban Hills , in the vicinity of which rich Romans lived in antiquity. The excavations of the ancient city are located on Monte Tuscolo above today's Frascati , in the municipality of Grottaferrata .

Around 1900, the term was a popular name for villas, cozy residences or favorite places to stay. 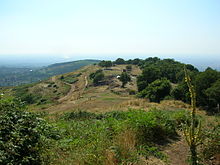 View from the hill of Tusculum, on the right the excavations

The name Tusculum is probably derived from the Latin name for the Etruscans ( Latin Etrusci, Tusci ). After the defeat of the Tarquinians on Regillus lacus around 496 BC. Tusculum joined the Romans and received 379 BC. Roman citizenship (as municipium sine suffragio ). In the Latin War (340–338) Tusculum took part against Rome , but was treated mildly after his defeat and received full citizenship. The villas of distinguished Romans, for example those of Lucullus , Caesar , Hortensius Hortalus , Cato , Marius and especially Cicero's famous "Tusculanum", to which he referred in his writing Tusculanae disputationes ("Conversations in Tusculum") , have been in its vicinity since the late republic. relates.

In the 10th to 12th centuries there was the capital Tusculum, the county of Tusculum , whose ruling family came from the Roman patriciate and were called Tusculans after their seat .

After long battles with the Crescenti, the latter gained power in Rome in the 11th century, where between 1012 and 1045 they provided three popes ( Benedict VIII , John XIX and Benedict IX ).

In 1167 the battle of Tusculum took place near Tusculum , in which Christian I von Buch and Rainald von Dassel and their knights defeated a majority of Roman troops.

After Pope Celestine III in 1191 . and the designated emperor Heinrich VI. After making peace, the city of Tusculum was destroyed by the Romans. Its ruins ( amphitheater , theater, castle) lie to the east above Frascati, which was founded by the displaced inhabitants of Tusculum.