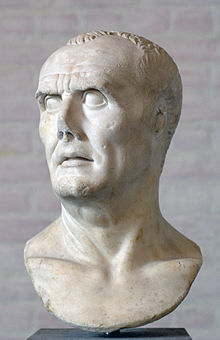 Portrait of a stranger, identified with Marius, Münchner Glyptothek (Inv. 319)

Gaius Marius (* 158/157 BC in Cereatae near Arpinum ; † January 13, 86 BC in Rome ) was a Roman general and statesman. As homo novus he reached the highest political offices in Rome. During his career he held the consulate a total of seven times - more often than any other man before him . He triumphed in two major military conflicts, firstly against the King Iugurtha of Numidia and secondly against the Cimbri , Teutons and Ambronesin the Germanic-Gallic migrant train. For this victory he was venerated as the savior of Rome, father of the fatherland and the third founder of Rome after the deified city builder Romulus and the legendary Gaul conqueror Marcus Furius Camillus . In opposition to the optimistic Senate mobility, which was opposed to him , he often politically supported the popular movement . Marius was married to Iulia , from the family of the Iulii Caesares, and thus the uncle of the later conqueror of Gaul and dictator for life, Gaius Iulius Caesar . The connection arose from the son of the same name, Gaius Marius the Younger .

Gaius Marius was born in the small village of Cereatae near the town of Arpinum. His exact year of birth is unknown and can only be guessed vaguely from backdating the time of his death. In older research - following a statement by Plutarch - the year 156 BC was used. Adopted. However, this is now considered unlikely and - based on another statement by Plutarch and a passage by Velleius Paterculus - is based on the year 157 and 158 BC. Has been postponed.

Marius' father of the same name and his mother Fulcinia both came from the local knighthood. As part of the ordo equester, the Marii family was part of the regional landed nobility, i.e. a well-to-do class, but had not yet appeared in the city-Roman official career and was therefore not a member of the senatorial nobility , the political leadership elite of the Roman Republic . The reality of life can best be compared with that of a rural landowner. It was in this environment that Marius spent his childhood and youth.

Marius' public career began with military service. The service is documented in the years 134-133 BC. As a knight under Publius Cornelius Scipio Aemilianus Africanus at the siege of Numantia . In doing so, Marius distinguished himself in many ways and gained the recognition and respect of his general. At the end of his 10-year service in the army, he obtained - probably sometime between 131 and 129 BC. - the election to the military tribune .

Subsequently, Marius returned home and prepared there for entry into the political office of Rome, the so-called cursus honorum . He began this - although both the timing and the fact itself are controversial - with the election as Quaestor . However, his successful candidacy for the tribune for the year 119 BC is then guaranteed. BC, probably with support, but not as a client of the powerful gens of the Caecilii Metelli . As tribune, he obtained first by energetic appearance towards the Senate and consuls a reform of voting rules that bears his lex Maria de suffragiis , stopped on the other by means of its veto but also a populares Grain Act. This earned him the reputation of an unyielding and independent politician, but reinforced the prejudices against him as homo novus , especially in the nobility . Probably due to optimistic opposition, he missed - probably in 117 BC. BC - initially the choice for the curule and a short time later also the choice for the plebeian aedile . In the following, however, he succeeded in the successful candidacy of praetor for the year 115 BC. In Rome. 114-113 BC Finally he administered - as governor - probably with the rank of propaetor - the Roman province Hispania ulterior , which he freed from bands of robbers.

After returning to the capital, Marius married sometime between 113 and 110 BC. The patrician Iulia from the house of Iulii Caesares, an aunt of Gaius Iulius Caesar , who gave him 110 or 109 BC. Chr. Gave birth to the son of the same name Gaius Marius the Younger .

From 109 BC At first Marius was a legate in the Yugurthin War under the (pro) consul Quintus Caecilius Metellus Numidicus . He succeeded against the resistance of the nobility for the year 107 BC. To be elected consul as homo novus and to take over the supreme command in the war against the Numidian king Jugurtha . The war had not been effective for Rome up to this point, but without major defeats. Marius first conquered the city of Capsa and then defeated Jugurtha at Cirta . With the help of his quaestor Lucius Cornelius Sulla he was finally able to end the war victoriously: Sulla negotiated the extradition of Jugurtha from his father-in-law Bocchus of Mauritania , with whom the king had found refuge.

Marius achieved his most important victories over the three Germanic tribes of the Teutons, Ambrones and Cimbri, which Rome after two major defeats at Noreia 113 BC. BC and Arausio 105 BC In fear and terror. The Cimbri and Teutons had allied themselves with the Ambrones and Haruden , who came from Jutland and the north German lowlands. Sulla now ruled as a legate and military tribune , later he was assigned to Quintus Lutatius Catulus (consul 102 BC) . 102 BC BC Marius destroyed the Teutons and Ambrones at Aquae Sextiae in southern Gaul (today Aix-en-Provence ) and 101 BC. The Cimbri near Vercellae in northern Italy (today Vercelli ). Catulus and his army also took part in the battle of Vercellae; both generals claimed victory for themselves. During this war, in disregard of the traditional prohibition of iterations , Marius was killed for every year from 104 to 100 BC. Elected consul.

According to Plutarch, Gaius Marius, as consul, is said to have decreed that the eagle, the symbol of the chief god Jupiter , should also stand as a symbol for the Senate and the people of Rome.

The army reform he carried out , which marked the transition from a militia army to a professional army , proved to be one of the decisive factors in Marius' great success . The professional soldier served his general for 16 years or 16 campaigns. As a reward he received a wage and a share of the booty. The general had to pay for the veterans' supply, which until Caesar took the form of a donation of land and was only replaced by monetary payments in imperial Rome. Thus the power of the generals grew, since the soldiers felt more committed to them than to the republic. From then on, a legion consisted of ten cohorts of 500–600 men each and no longer consisted of the previous maniples , training was streamlined and the soldiers received standard armament , which also included the pilum .

However, Titus Livius explains that manipulation tactics continued even after the reforms, e.g. B. in Spain, was still in use, as it was still superior to cohort tactics in these specific theaters of war. The entourage was greatly reduced, and the soldiers had to carry their own equipment, which is why they were also called muli Mariani ("mules of Marius"). In addition, Marius opened the ranks of the army to the capite censi , the class of the dispossessed who had been excluded from military service until then. This was possible because the state now provided the soldiers' equipment.

The reform made the Roman army more powerful and professional, but it was now easier for ambitious generals to use it to gain political power in Rome. The introduction of a legionary eagle also made the legionaries more mentally bound to the general and motivated them to fight for him. The problem of the so-called army clientele arose : the military commanders now had the task of politically ensuring that their landless veterans were provided with land after the war. This made the military leaders the cartridges of their soldiers, who in turn became their sworn clients . As a result, the military commanders had enormous political power, which is why the Senate, for example in the case of Gnaeus Pompeius Magnus, opposed such a land distribution.

Withdrawal from daily politics (99-89 BC)

At the height of his power, the highly decorated Marius retired in 100 BC. BC returned from active politics after his sixth consulate because he had to accept a domestic political defeat in the Senate. The improvements aimed at by the People's Party for the common people were rejected with the votes of the Optimates . As a result, there were riots in Rome, whereupon Marius had to impose a state of emergency against his political friend, the tribune Lucius Appuleius Saturninus . In the alliance war from 91 to 88 BC Marius took over in 90 BC. BC after the death of the consul Publius Rutilius Lupus again a command and proceeded successfully against the Martians . However, his empire was not extended for the following year. The war finally ended when the Italian allies were granted Roman citizenship .

In the year 88 BC The senate commissioned Sulla, who was one of the two consuls of the year, to wage war against Mithridates VI. who had previously conquered the whole of Asia Minor in a comprehensive advance and had thousands of Roman citizens and Italians murdered in the murder action known as Vespers of Ephesus . However, Marius obtained through the tribune Publius Sulpicius Rufus, allied with him, the transfer of this command through the comitia centuriata to him. Sulla, however, did not recognize this approach and marched on Rome with his legions standing in front of Nola . The city fell into the hands of Sulla, who returned command and declared his domestic opponents to be enemies of the state. Marius fled from Rome and Italy to North Africa, where he found safe refuge among former veterans on the island of Cercina, today's Kerkenna .

In 87 BC BC Marius returned to Italy, where, after Sulla's march towards Asia Minor, the domestic power struggle between populars and optimates broke out again and in the course of which the popular consul Lucius Cornelius Cinna and his followers were expelled from Rome. Marius joined the displaced and with them gained control of Rome. The leaders of the optimistic opposing side were liquidated or committed suicide. In addition, the ban was lifted, and Marius and Cinna received for the year 86 BC The consulship. It is unclear and controversial whether this was done through election or self-nomination.

Marius took office on January 1st, but died just two weeks later on January 13th, 86 BC. Probably from a pleurisy . His remains were buried near the Anio River . However, Sulla had them exhumed and thrown into the river a few years later after his victory in the civil war, in order to forever darken the memory of his enemy.