The title of this article is ambiguous. For the historical motor vehicle, see oldtimer . 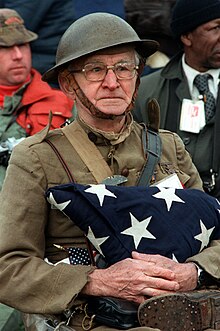 Veteran (from Latin veteranus "veteran soldier") is a term for a veteran soldier . War veterans are also used in the case of former war veterans . In Germany, every soldier who is active in the Bundeswehr or who has left it honorably is a veteran.

In a broader sense, veteran is a term for someone who has proven himself over a long period of "service", for example. This is also the colloquial term for company or club veterans.

Veterans in the Roman Empire

In the Roman Empire , veterans were soldiers who had completed their service period of mostly 20 years and had been dismissed, or who remained with the army as so-called evocati . The fighting strength of Caesar's veteran legions, the iron men, was feared. While in republican times a civil army was raised in the event of war and immediately disbanded after the end of the campaign, it was established in the 2nd / 1st century BC. Chr. Gradually, the professional army by (army reform the Gaius Marius ). The professional soldiers , who were engaged for a certain period of time, were allocated arable land in the provinces after they had finished their service . Since the supply of the veterans was guaranteed by the respective generals , the veterans regarded themselves as belonging to his clientele and thus formed a power factor that was particularly important in the civil wars . In some cases, since Pompey , they were recalled to the service as Evocatus , which was considered a special privilege.

Veterans in the modern age

Depending on the country, the modern term veteran is narrower or broader. In Norway and Denmark , only those who have taken part in a foreign assignment are considered veterans (Scandinavian model). In the UK and US , anyone who has served in the armed forces is considered a veteran (Anglo-American model).

Today's veteran system, in particular many traditional war clubs or veterans clubs in Germany, goes back to the time of the Franco-Prussian War of 1870. Even today, participants in one of the two world wars of the 20th century are referred to as war veterans , as is the case with the Vietnam War . Numerous veterans' associations take care of comradeship and problems that arose from participating in the war. Some clubs are also politically active. Many veterans have suffered war trauma that is now recognized as post-traumatic stress disorder (PTSD), but can also have other physical and psychological causes. When returning from the two world wars, different variants of tremor occurred, often called “the tremor” in the vernacular . The suicide rate is higher among veterans than among other populations. This was evident, for example, after the two Iraq wars and among those returning from Afghanistan. One in ten British convicts and one in four American homeless people are veterans.

In Germany there is currently no legally regulated veteran concept. The term veteran has been defined as follows since 2018: "A Bundeswehr veteran is anyone who is a soldier in the Bundeswehr in active service or who has left this service with honor, i.e. who has not lost his rank." 10 million veterans (as of 2018).

Veterans are entitled to family care before and during the deployment, medical treatment after the deployment, financial compensation for injuries suffered and educational measures before leaving the armed forces.

In France , the veteran concept is regulated by law in the Code des pensions militaires d'invalidité et des victimes de la guerre . French law only knows the term former fighter. It understands this to mean around 3 million soldiers and civilians (as of 2016), who each have to meet various requirements in order to receive a combatant ID card or the title of “recognition of the nation”. More claims are derived from the combatant ID card than from the title “Recognition of the Nation”.

Former fighters with combatant ID are entitled to pension surcharges, tax deductions, access to the services of the Office national des anciens combattants et victimes de guerre and, in the event of death, the right to have the coffin covered with the national flag at the funeral service . Former Nation Recognition Fighters are eligible for supplementary life insurance.

The generation change and the low presence of veterans are currently a challenge for social recognition. The government wants to counter this by making it easier to obtain the combatant ID, greater support for veterans organizations and greater recognition of veterans (e.g. with a memorial ).

In the Netherlands , the veteran concept is legally regulated in the Veteranenwet and Veteranenbesluit . The term veteran is defined as follows: "The military, the former military or the former conscript who [...] served the Kingdom of the Netherlands under war conditions and / or took part in a mission to manage or promote the international legal order, insofar as this mission was ordered by the Minister of Defense. ”According to this, there are around 115,000 veterans (as of 2016).

Veterans are entitled to social-medical accompaniment, help in finding a job and support in organizing or participating in veterans' meetings.

The public and private veterans' system is interlinked to strengthen social recognition. There are several initiatives that recognize the merits of veterans, such as the celebration of Veterans Day on the last Saturday in June and the award of veterans badges. In addition, foundations (veterans institute, veterans day, veterans platform) and veterans homes are supported.

In the UK , the concept of veterans is regulated by law in the Armed Forces Covenant and Armed Forces Act . The term veteran is defined as follows: "A veteran is anyone who has ever served in Her Majesty's armed forces , regardless of age or length of service." According to this, there are around 2.6 million veterans (as of 2015).

Veterans and, in some cases, their dependents are entitled to a wide range of government benefits. These include real estate tax deductions, housing allowances, issuance of a veteran's card (e.g. for free or discounted use of public transport and other facilities), child benefit supplements and loans from parents, unemployment benefit supplements and preferential access to the state health system .

Due to the royal house and politics, veterans enjoy high social recognition and strong public appreciation. There are numerous donation-funded charities such as the Royal British Legion . Medals and decorations are often given to former soldiers. Every year on the last Saturday in June, Armed Forces Day is celebrated as a day of honor for the armed forces and veterans.

In the United States , the concept of veterans is regulated by law in the 38 United States Code and 38 Code of Federal Regulations . The term veteran is defined as follows: "A person who served in the active military, naval, or air service, and who was discharged or released therefrom under conditions other than dishonorable." According to this, there are around 21 million veterans (as of 2017).

Veterans are entitled to status independent benefits. These include pensions, medical care, insurance, education and integration measures, in some cases also for relatives, real estate loans, survivors' assistance, awards and badges as well as transitional benefits.

Veterans enjoy broad recognition through a publicly coordinated veterans' system and advocacy group. There are numerous organizations such as the American Legion and events such as Veterans Day on November 11th that promote the social recognition of veterans. This is also reflected in the benefits granted by private institutions (e.g. shopping discounts in supermarkets).