Logo of the NHS in England 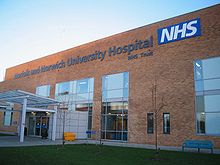 Entrance of an NHS hospital

The NHS operates in four largely independent organizations for England , Wales , Scotland and Northern Ireland and provides medical care to around 65.5 million people. In 2015, the NHS had a financial volume equivalent to 251.2 billion euros.

The National Health Service was founded in 1948 under Prime Minister Clement Attlee according to the so-called Beveridge Report. It is largely financed indirectly from the budget of the Ministry of Health through the State Agency Public Health England (PHE) and guarantees primary (family doctor) and secondary (hospitals) medical care for everyone resident in Great Britain. Travelers from the EU or the EEA are also entitled to free medical care in an emergency.

The developments in expenditure for the NHS from 1948 to 2014 (nominal expenditure, inflation must be taken into account)

The National Health Service was established under Prime Minister Clement Attlee in 1948 after World War II . The Labor government incorporated the recommendations of the Beveridge Report. Health Minister Aneurin Bevan pushed through the establishment of the public and central health system against the opposition of the general practitioners.

While in Germany the Wilhelmine approach of a health system financed by income-related social security contributions has persisted from its inception to the present day, the system in the UK is based on the fundamental idea of ​​the welfare state . The NHS is designed to provide primary (family doctor) and secondary (hospitals) medical care to everyone in the UK. Travelers from the EU or the EEA are also entitled to free medical care in an emergency.

After the establishment until the 1990s

In the early years of the NHS, operating costs quickly exceeded economic projections for operating the system. Prescription fees to cover rising costs were considered. The NHS grew rapidly in the 1960s and the health sector in general saw a positive surge in the development of new effective drugs during this period.

After the economic optimism of the 1960s subsided, the NHS underwent major restructuring for the first time in 1974. In the 1980s, management methods based on supply-and-demand criteria were increasingly introduced under the Thatcher administration. But even under Margaret Thatcher , who accepted social inequality and reduced a number of other areas of public services, was able to continue to fulfill its basic task, according to the NHS journalist Jessica Brain.

Prime Minister David Cameron ( Conservative Party ), by his own admission, operated the "most radical NHS reform in decades". In January 2011, the second reading of his Health and Social Care Act 2012 took place in Parliament. Cameron wanted to cut healthcare spending from the equivalent of 115 billion euros per year by 18 billion euros by 2015 and, above all, to restructure the administration. The law provided for greater competition between public and private medicine and abolished a number of NHS agencies. A major change was that responsibility for general health care through the NHS was removed from the Department of Health and transferred to the newly established government agency Public Health England .

In May 2017, the put ransomware " WannaCry ", were affected by the 70 countries, hospitals and other institutions crippled the NHS throughout the UK. Laboratory reports and patient data could not be viewed. Many hospitals closed and were only accessible to acutely life-threatened patients; many surgeries and cancer treatments were suspended.

Brexit also had a major impact on the NHS workforce. Many employees from other EU countries emigrated again. 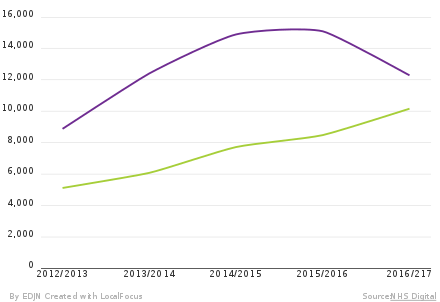 When the 2020 corona pandemic put a heavy strain on health systems around the world, it became clear that the NHS was not adequately prepared for the major situation in a number of areas due to years of savings. The existing shortage of staff was exacerbated by the departure of several EU foreigners after Brexit . A large part of the medical staff was also infected; according to the Royal College of Physicians , one in four NHS medical professionals was "sick or in isolation" at times. According to the RCP, the sickness rate was at times up to 50 percent in some places. The number of intensive care beds in the NHS is below the European average. Because of this lack of intensive care beds, the British military had to step in and built seven field hospitals with several thousand intensive care beds.

Around 20,000 former NHS employees agreed to help out during the crisis. In addition, Boris Johnson's government is recruiting unemployed flight attendants in the pandemic.

The NHS reports directly to the Department of Health. The operation of the NHS depends on its budget. The NHS is largely structured according to the top-down principle . For historical reasons, four largely independent organizations operate for the parts of the country:

In 2016, around 236,800 licensed doctors practiced under the NHS, bringing the total to 277 British doctors for every doctor. Total UK healthcare spending in 2015 was € 251.2 billion, representing 9.9 percent of the country's GDP . In relation to the population at the time, an average of 3857 euros was spent on health per Briton.